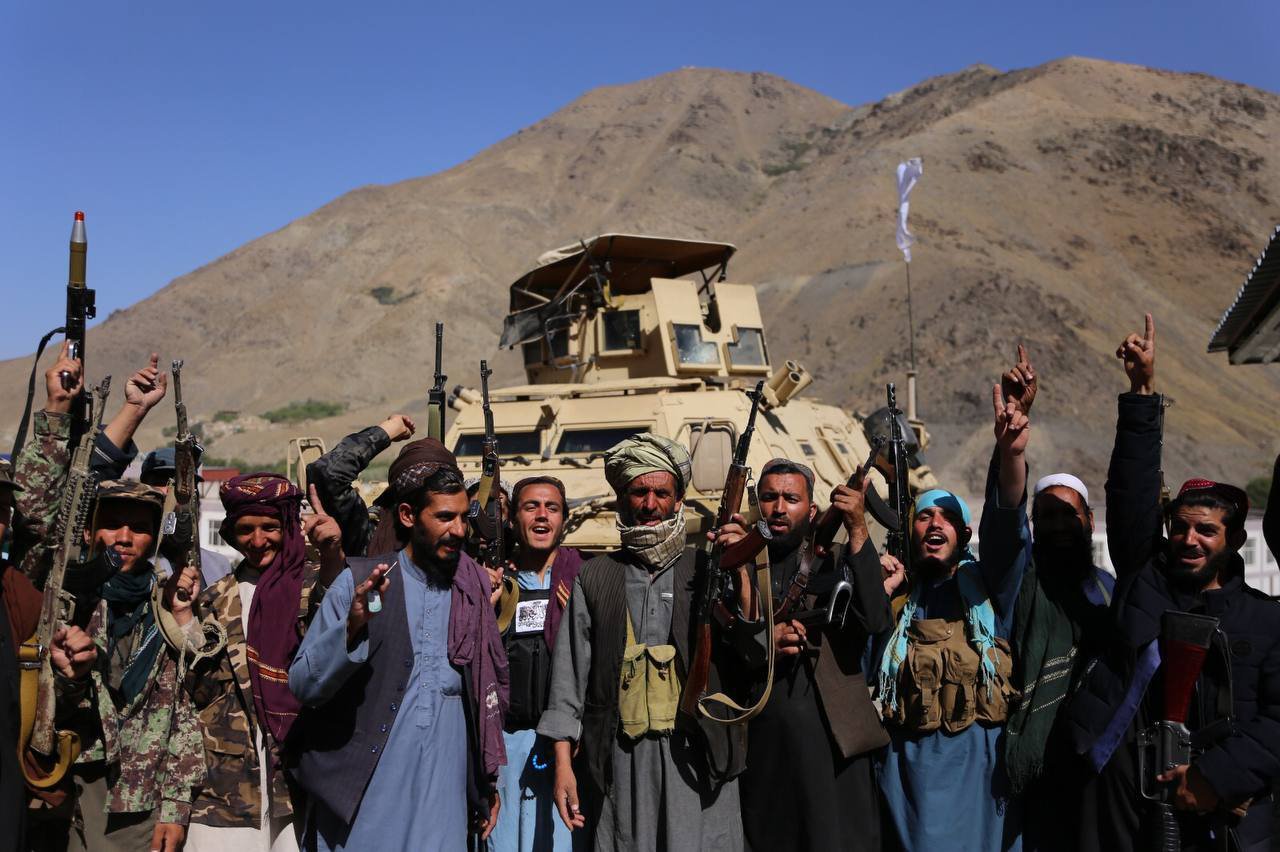 Disturbing footage has emerged of Taliban members executing an Afghan soldier before celebrating as they hold up his severed head by his hair.

The 36-second video shows six fighters surrounding the soldier, five armed with rifles while one man, thought to be the leader, brandishes two bloody knives.

A seventh person recorded the film, which was obtained by the Washington Examiner.

It is believed to have been posted in a private Taliban chatroom around a week ago, although it is not clear when the killing took place.

According to the Examiner, the men are heard chanting ‘Mujaheddin!’ – a term for Muslims who fight on behalf of their faith.

They also honoured the supreme leader of the Taliban, Hibatullah Akhunzada.

The victim is believed to be an Afghan soldier because he was wearing dark green uniform which matched the type assigned to the national army by US forces.

The footage has been unearthed as the Taliban attempted to reassure Western leaders.

Spokesman Zabihullah Mujahid said: ’I would like to assure the international community, including the United States, that nobody will be harmed.

‘We don’t want any internal or external enemies.’

But it comes as two journalists in Afghanistan shared harrowing pictures of their injuries after claiming the Taliban arrested them and beat them up, just for doing their jobs.

Neamat Naqdi and Taqi Daryabi, who work for the local Etilaat Roz newspaper, told how they were ‘arrested, insulted and kicked’ while reporting on protests in Kabul after it was announced the new Taliban cabinet would not feature a single female.

Mr Naqdi says he was told: ‘You are lucky you weren’t beheaded’.

Brig. Gen. Don Bolduc, who oversaw the police and army training as Special Ops commander, told how he was saddened and sickened by the video.

‘This is what we are going to be dealing with. These are the kind of people the Biden administration has decided to deal with and turn an entire country over to,” he said.

‘These people commit crimes against humanity that pale in comparison to other groups in history.

‘Some of their torture methods are to skin a person alive.’

‘These guys are bad to the bone bad,” Bolduc added. “There is nothing good about these people.’

It comes as former President Donald Trump chose to criticise Biden’s handling of the crisis on the 20th anniversary of 9/11.

Trump spoke out during a visit to the New York Police Department – while his successor and former leaders paid their respects at an emotional ceremony at Ground Zero.

Biden has previously insisted he did not regret pulling troops out of Afghanistan – and dismissed claims that the withdrawal could have been more orderly.

Meanwhile George W. Bush and current Vice President, Kamala Harris, addressed Americans in Pennsylvania, urging the nation to unite as they remember the 2,977 people who perished in the atrocity.

Bush praised the armed forces but also defended his War on Terror – despite the Taliban seizing control of Afghanistan.