Forty laneways will be flooded with light, music and art installations to help revitalise the CBD this summer as part of a COVID-19 recovery plan to keep artists in work and lure people back to the city.

The six-month project, covering the CBD, North Melbourne and Carlton, will employ at least 150 people and kick off once it's safe and allowable under lockdown restrictions. 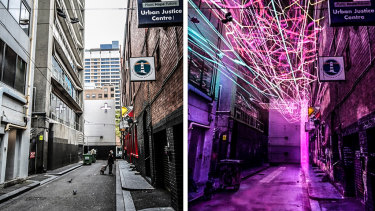 Westwood Place in the CBD will get a light installation as part of the project. A rendering of the design is pictured on the right.Credit:Simon Schluter/ Ogilvy Australia and Vandal

The initial project will involve a tube lighting installation at Westwood Place in the CBD, alongside the Salvation Army's Bourke Street headquarters, by Ogilvy Australia and Sydney art studio Vandal.

But there will be a call out for Victorian artists, including designers, music producers, light specialists, production designers, technicians and maintenance workers, to contribute future works.

Executive producer Lachlan MacDowall, from the University of Melbourne, said he hoped that some infrastructure, such as light boxes or music platforms, could become permanent fixtures.

"There's two broad aims, one is to support creatives in a pretty challenging time when a lot of their normal avenues for income aren't available," Dr MacDowall said.

"The second aim is to give a sense of excitement about the possibilities of what's happening in the city."

Dr MacDowall said laneways that needed "a little love" had been selected, but that artists and works would be carefully selected to compliment the character and history of each laneway.

Dr MacDowall couldn't say when the project would launch, because it would depend on Melbourne's case numbers and the steps out of lockdown.

"There's an enormous sense of excitement, frustration and a bit of pent up energy. We'll be getting into those laneways as soon as we can."

He thinks it could be a safe way for people to engage with the city, because they are in the open, dispersed, and will be freely accessible at all hours of the day. 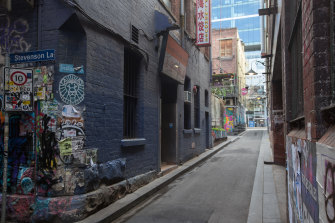 Tattersalls Lane in the CBD is on the list of 40 city alleys to be included in the project.Credit:Simon Schluter

"This project will create jobs now, support our local businesses and traders and help attract more people into the city in the future."

Employment Minister Jaala Pulford said the project would revitalise some of Melbourne's most-loved public spaces while getting people back to work.

"This will drive creativity and pride in our CBD laneways and create jobs for workers, ranging from designers and lighting specialists to technicians and maintenance workers," Ms Pulford said.

The state government and city council this week also announced a $100 million fund to help bars and restaurants seat diners on footpaths and city streets to help claw back business.