As best as anyone can tell, Horsham is COVID-free. It hasn’t had a case this year and since the pandemic began, has only had 14 confirmed infections. Right now, you are as likely to drown in the surf as die from COVID in the land-locked, Wimmera town.

Despite this, Sandra Muller is unable to travel from her Horsham home to Townsville to be with her husband as he recovers in intensive care from a workplace accident. For no obvious public health benefit, a family has been separated by blunt bureaucratic instrument at a time when they require compassion and understanding. 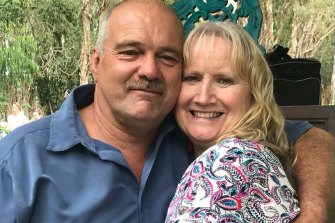 Sandra Muller is desperate to see her husband, who is alone in hospital in Townsville.

Human rights lawyer Greg Barns sees a parallel between of our treatment of asylum seekers, driven by a myopic obsession with border security, and the way individual circumstance counts for little in a narrow, public health calculus that considers only the potential spread of a virus.

“It is a similar mindset,” Barns tells The Age and The Sydney Morning Herald.

“It is about saying, in the context of a manufactured or real crisis, that the government must hold the line irrespective of the patent injustice or damage that is causing to the lives of individuals.

“It is not only the discretionary decision-making power, it is inflexibility of the way that power is exercised. You get decisions which are in the parameters of the discretion, but simply fly in the face of fairness, equity and compassion.”

“You get torn apart over this stuff, I continue to,” Professor Sutton said during an Australian Health Practitioner Regulation Agency podcast after last year’s second wave.

World renowned ethicist Peter Singer says the awful circumstances of Warrnambool mum Skye Meinen, who was unable to hold the funeral she had planned for her eight-year-old son Cooper, or Moe and Sarah Haider, the couple separated from their newborn son, will always elicit greater public sympathy than bureaucrats trying to protect nameless, unidentifiable people. 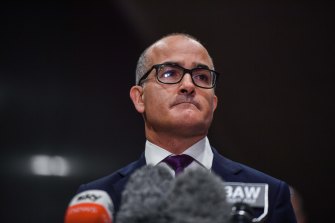 Victorian Acting Premier James Merlino says the only way out of COVID restrictions is to follow public health advice — even if this requires heart wrenching decisions.Credit:Joe Armao

“Think of the stranded Australians overseas,” Professor Coady says. “They are clear candidates for compassion. Then think of the slow federal government response to their plight.

“The adherence to rules and legitimate objectives can become so rigid … that you can’t see past the necessity for the enforcement of them to the need for flexibility. It is fair enough to say you can’t let compassion overwhelm you, but it has got to have a real role.”

This rigidity, particularly in the enforcement of state border closures, has created perverse outcomes. Last year we saw the cases of Sarah Caisip, an ACT nurse unable to travel to Queensland to go to father’s funeral, and a Ballina woman who lost one of her unborn twins after being flown to Sydney instead of Brisbane for emergency treatment.

In August last year, Lee-Anne Rice, a Tweed Heads mother, was unable to take her 14-year-old son, a lung transplant recipient, to his regular, specialist doctors on the other side of the Queensland border. This prompted an unforgettable response from Queensland Premier Annastacia Palaszczuk, who declared that Queensland hospitals were for Queenslanders.

Acting Victorian Premier James Merlino, while less blunt, is similarly not for turning. Although he describes the decisions involving the Meinen and Haider families as heart wrenching, he says the only way out of COVID restrictions is to follow public health advice.

While no political leader argues otherwise, not everyone is convinced of the need for public health imperatives to trump every other consideration. Fiona Patten, the leader of the Reason Party, says her support for Victoria’s public health emergency powers has always come with a caveat.

“I can’t help fearing that despite the incredibly good work we are doing, we are cutting off our nose to spite our face in certain circumstances,” she says.

“As we said right from the start the rules need to be nuanced, there needs to be an ability to look at things on a case-to-case basis.”