SIR Keir Starmer has demanded Boris Johnson put the country into a 'circuit breaker' national lockdown instead of the '3 tier' system.

The Labour leader has urged the PM to close all pubs, bars, restaurants and offices for two to three weeks.

Sir Keir said this evening the PM's latest restrictions – which mean pubs and bars in the highest level of lockdown have to close – do not go far enough.

He said: "We're at a decisive moment in fight against coronavirus. The figures are stark and all heading in the wrong direction,

"Another course of action is needed, that's why I'm calling for a two to three week circuit breaker in England.

"A temporary set of clear and effective restrictions to get the R rate down."

If more draconian rules weren't brought in, Sir Keir warned the UK could "sleep walk into a into a long and bleak winter".

He stressed his proposals would not mean schools would not have to close if it was timed to fall over half term.

But pubs, bars, restaurants and offices would have to close all over again.

Mr Johnson said last night a more "balanced" approach was needed to walk the very fine line between bringing in enough measures to stop the virus spreading, but not as many to crush the economy.

Downing Street has refused to rule out short national lockdown.

A spokesman for No10 said this afternoon: “Obviously we keep all of our measures under review and where we have needed to go further we have been prepared to do so.

“What you did hear very clearly from the Prime Minister yesterday is that when he was asked about something akin to a national lockdown he said that he wanted to avoid measures that would do immediate harm to children’s education and there are other important considerations as well as mental health and wellbeing."

Mr Johnson defied the Government top scientific advisers yesterday when he brought in the new system of local lockdowns.

Documents release last night from the Government Scientific Advisory Group for Emergencies (Sage) revealed his top team of experts were pushing for a harsher lockdown.

The group of scientists, chaired by Chief Medical Officer Chris Whitty who appeared with the PM last night, called for the country to immediately be put under a set of tough national rules akin to a "circuit breaker" lockdown.

They warned that failing to do so could result in "a very large epidemic with catastrophic consequences".

He said: The Government has not got a credible plan to slow infection it has lost control of the virus."

He quoted from the minutes of the Sage meeting, which say a circuit breaker lockdown could put the UK 28 days back in terms of new infections.

Today the number of new cases skyrocketed to 17,234 in the UK, with 143 new deaths – the highest daily rise since June.

There were 655 new admissions to hospital, after the PM warned it was crucial to stop the NHS being overwhelmed to the point where they are unable to carry out other essential services.

Labour has said they will vote for the PM's new tiered system of local lockdowns in a debate in the Commons tonight.

Scotland was put into a "circuit breaker" lockdown for 16 days from last Friday evening, with pubs, bars and restaurants forced to shut up shop from 6pm, and unable to serve any alcohol when they are open. 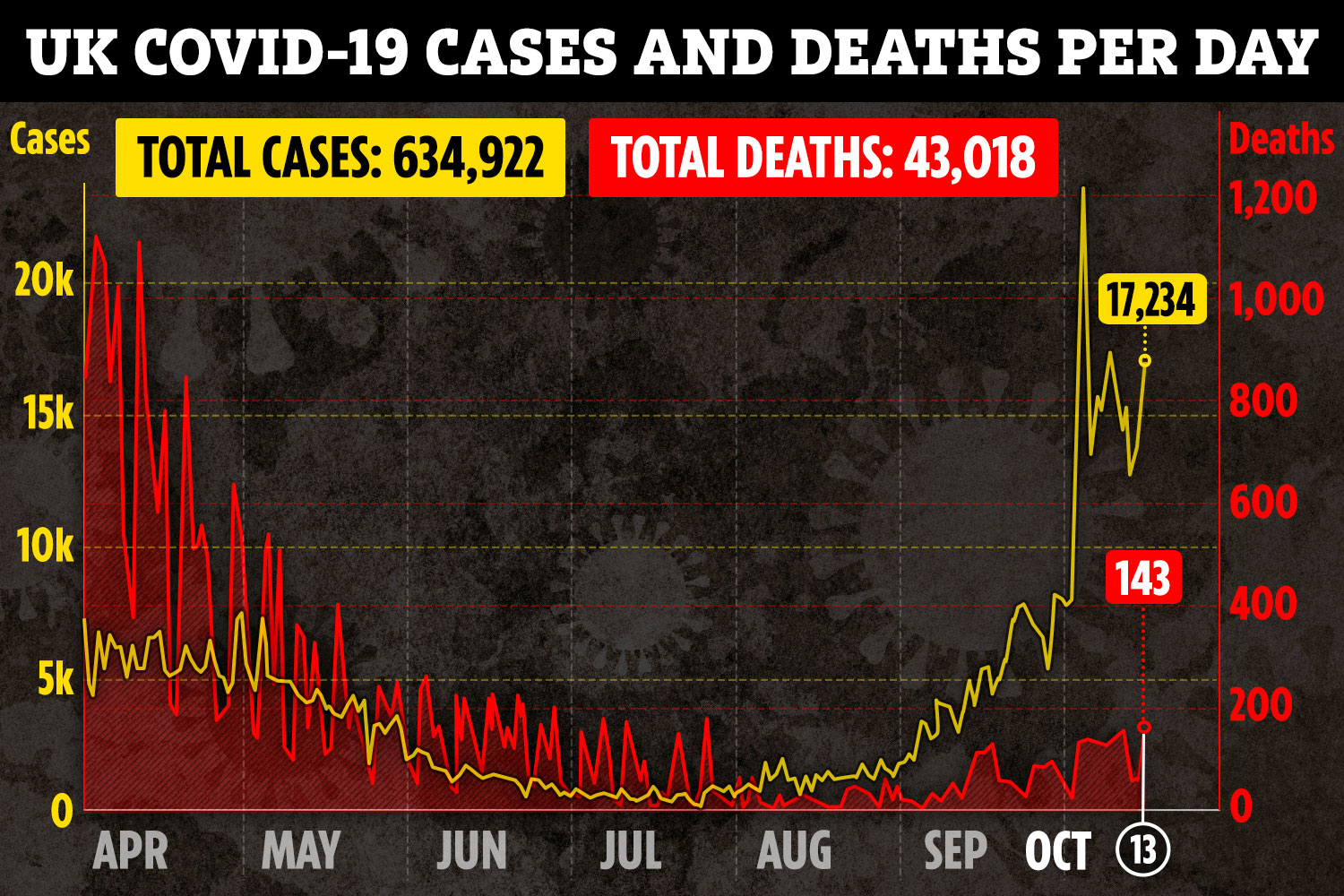