The Labor Party is cautiously optimistic it will wrest the once-safe Liberal seat of Deakin, in Melbourne’s outer-east, and oust incumbent Michael Sukkar, the country’s former assistant treasurer.

Postal votes, which traditionally tend to favour the conservative side of politics, are showing stronger-than-anticipated support for Labor, according to senior Labor sources. 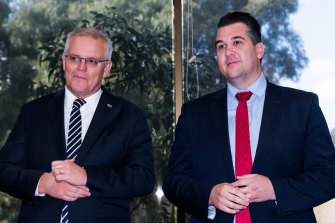 In what might have been a kiss of death, former prime minister Scott Morrison visited Michael Sukkar’s electorate of Deakin during the election campaign. Credit:James Brickwood

With 71 per cent of votes counted by Sunday morning, Labor’s Matt Greg was leading by 0.70 per cent on a two-party preferred count, even though his party did not particularly target the seat nor invest major resources in it.

“We could be on,” one Labor source said, speaking on the condition of anonymity. “I’m not saying it’s a done deal, but it could be a thing.”

Another senior Labor figure said, based on small batch of postal votes counted on Sunday, the party was performing well enough to win Deakin.

The Liberal Party is likely to be left with only two of Melbourne’s 22 urban seats after Saturday’s election: Aston, centred on Ferntree Gully and Knox, and Menzies, which takes in Doncaster and Bulleen.

The Labor-held seat of Macnamara, which takes in St Kilda, is still too close to call, but Labor is confident Josh Burns will hold it after the Liberal primary vote plummeted by more than 10 per cent and the Greens’ primary soared.

Labor believes postal ballots are breaking Burns’ way, and he will overcome Greens candidate Steph Hodgins-May. However, there is frustration in Victorian Labor that the national campaign did not, as it had in previous years, focus some of its attention on countering the Greens in the inner-city.

Macnamara was taken off the party’s target seats list and had minimal resources allocated towards it. Funds and campaign expertise from Macnamara were diverted to Higgins, where Labor’s Michelle Ananda-Rajah toppled Liberal Katie Allen.

Menzies, occupied by former minister Kevin Andrews for two decades, was held by a 7.5 per cent margin going into this election. Keith Wolahan, a former barrister, will hold the seat by a fine margin if he prevails.

The only Melbourne-based Liberal who avoided a major swing was La Trobe’s Jason Wood, a former police officer known for his community campaigning with multicultural groups in Melbourne’s diverse south-east.

Labor is confident it can form a majority government, but frontbencher – and former opposition leader – Bill Shorten said the party needed to acknowledge the significant vote for options outside the two major parties.

There are 14 seats still in doubt, including Bennelong in NSW where Labor is leading, and Brisbane where the Greens are leading.

Senior Labor frontbencher Kristina Keneally, who was parachuted into the safe Labor seat of Fowler, lost to independent Dai Le, who will join the largest crossbench since federation.