Sir Keir Starmer tonight apologised for the ‘hurt’ caused by his visit to a London church whose pastor has spoken out against gay marriage.

In a video uploaded while visiting a vaccine centre in Jesus House in Brent Cross on Good Friday, Sir Keir praised the establishment for serving its community during the pandemic and said it set a ‘wonderful example’.

However, the Labour leader faced criticism from his own party after LGBT+ activists said its senior pastor Agu Irukwu had opposed gay marriage.

In 2006, he signed an open letter which argued equality laws would ‘force’ churches to ‘promote the idea that homosexuality is equal to heterosexuality’.

‘For the sake of clarity, this is not what the Bible teaches and it is not what we believe to be the truth,’ the furious letter had claimed.

But in an embarrassing U-turn just hours later, the leader of the Opposition said it was a ‘mistake’ to visit the church and has deleted the video. 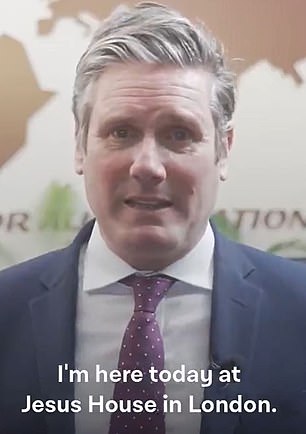 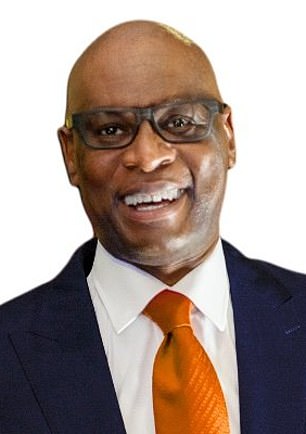 The Labour leader faced criticism from his own party after he posted a video on Twitter praising Jesus House for All The Nations church in Brent Cross. The church’s senior pastor, Agu Irukwu, has previously attracted controversy for his comments on LGBT+ rights

Sir Keir, a former director of public prosecutions, claimed he was ‘not aware’ of the establishment’s views on gay rights and apologised for the hurt’ caused

Sir Keir, a former director of public prosecutions, claimed he was ‘not aware’ of the establishment’s views on gay rights and apologised for the hurt’ caused.

‘I completely disagree with Jesus House’s beliefs on LGBT+ rights, which I was not aware of before my visit,’ he tweeted. ‘I apologise for the hurt my visit caused and have taken down the video. It was a mistake and I accept that.’

Pastor Irukwu had added his name to a letter to the Telegraph in 2006 which opposed what it called Labour’s ‘latest discrimination against Christians’.

The letter alleged ‘increasingly the Labour Government is discriminating against Christians in order to appease minority groups’.

The group said that sexual orientation regulations would ‘force Christians in churches, businesses, charities and informal associations to accept and even promote the idea that homosexuality is equal to heterosexuality’.

‘In our view, these regulations are an affront to our freedom to be Christians,’ the letter went on. ‘If the Government thinks that we will accept this law lying down, they are mistaken.’

The Labour Campaign for LGBT+ Rights had branded Sir Keir’s visit and subsequent social media endorsement of its work as ‘unacceptable’.

After raising it with the leader’s office, the group said last week that it had received an ‘unreserved apology’ and would be holding a further meeting to ensure it did not happen again.

In the now-deleted video, Sir Keir praised Jesus House as a ‘wonderful example’ of a church serving its community during the coronavirus pandemic – including acting as a vaccination centre. 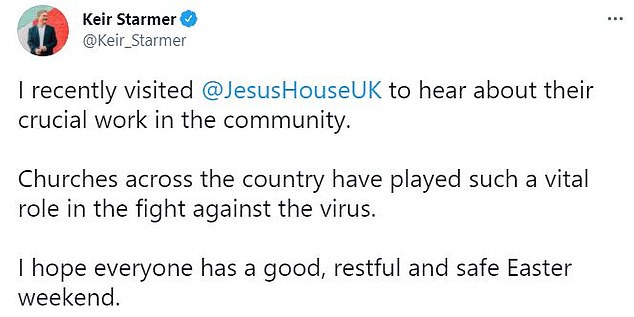 In the now-deleted video, Sir Keir praised Jesus House as a ‘wonderful example’ of a church serving its community during the coronavirus pandemic – including acting as a jab centre

‘From rolling out the vaccine to running the local food bank, Jesus House, like many other churches across the UK, has played a crucial role in meeting the needs of the community,’ he said.

In 2017, Theresa May was criticised when she visited the church, although Boris Johnson and the Prince of Wales have both been to the pop-up vaccination centre there in recent weeks without attracting widespread comment.

Labour sources said Sir Keir’s visit was also focused on the vaccination centre – although the video did show him apparently praying with the pastor.

A Labour spokesperson previously said: ‘The Labour Party is unwavering in its support for the LGBT+ community and a woman’s right to access safe abortions, and have called for the Government to stop dragging its feet and ban the abhorrent practice of conversion therapy.’

Labour councillor Kerri Prince said on Twitter: ‘When I worked for an MP, I would google every organisation who wished to meet with him.

‘I cannot fathom that nobody in Keir’s office bothered to check the background of Jesus House. Totally unacceptable.’

Another user added: ‘Ok thanks Keir, I’ll be cancelling my membership of @UKLabour now. It’s been fun, but I don’t like people who pander to homophobes. Bye.’

And another said: ‘I’m barely holding on to Labour party membership Keir.

‘I’m only holding it due to the fact I always believed Labour to be better than the Tories but you are now promoting such objectionable ideas from associates for photo ops I have to hand my membership back and vote elsewhere.’