Japan on Tuesday demanded Russia apologise for detaining a diplomat over alleged espionage, denying the charge and accusing Moscow of blindfolding and pinning the man down in ‘unbelievable acts’.

‘The official was blindfolded, with pressure applied to both his hands and head so he was unable to move while being detained, and then he was questioned in an overbearing way,’ Matsuno said.

The released consul has had no problem with health conditions and will depart Russia by Wednesday, Matsuno said.

The FSB had earlier said that Tatsunori was declared persona non grata after he was caught ‘red-handed’ while receiving classified information, in exchange for money, about Russia’s cooperation with another country in the Asia-Pacific region’. 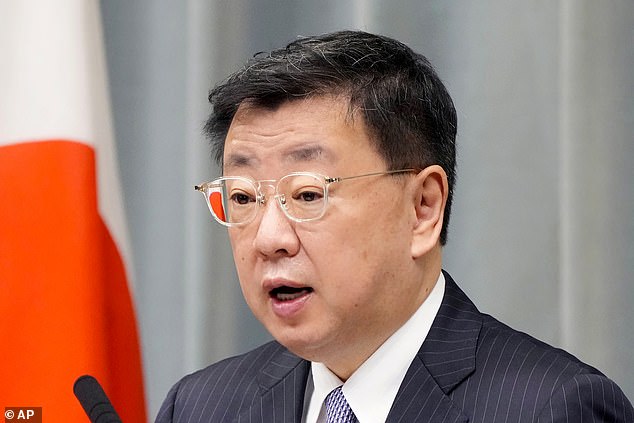 The diplomat had also been soliciting information about ‘the impact of Western sanctions’ on the eastern Primorsky region, the FSB said, according to news agencies.

Japan summoned the Russian ambassador and ‘demanded a formal apology’ for the treatment of the diplomat upon his detention, which Matsuno said violated the Vienna Convention on Consular Relations.

‘The detained consul was not engaging in any illegal activity,’ Matsuno said, adding the Japanese deputy foreign minister told the Russian ambassador to Japan that Tokyo ‘needs to take equivalent steps’ and demanded a formal apology from Moscow.

The Russian security service distributed a short video it said showed the diplomat acknowledging that he had violated Russian laws, and reportedly said Moscow had lodged a protest with Tokyo through diplomatic channels.

Russia considers Japan to be a ‘hostile’ country – a designation it shares with all European Union countries, the United States and its allies, including Britain and Australia.

Tokyo had complex relations with Moscow before the invasion of Ukraine in February, and the two sides have yet to sign a post-World War II peace treaty.

Attempts to do so have been hampered by a long-running dispute over islands controlled by Russia, which calls them the Kurils.