Assembled in a makeshift commercial kitchen on a side street in Melbourne’s north, 15 volunteers with the Muslim Women’s Council of Victoria take on their own “mystery box” every Friday.

They rustle through donations of food from local charities and businesses: spare vegetables, rice, spice packets, sometimes chicken or beef. 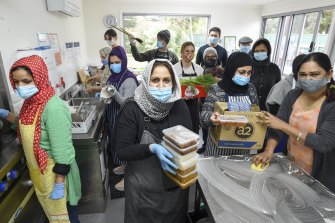 Afshan Mantoo (centre) and her group of volunteers preparing food at their kitchen in Coburg.Credit:Penny Stephens

Their assignment? Come up with a meal to serve the vulnerable Victorians who visit for Friday lunch in Coburg. Demand has peaked and troughed since mum-of-four Afshan Mantoo, the council’s president, started the initiative at the start of the coronavirus pandemic last March.

“We got up to 300 people visiting us in the second wave. By the start of May we were down to 100. People were honest, they said ‘thank you, we no longer need it, we’re back in jobs and things are looking better’.”

Fast forward to a fortnight ago when the government announced another statewide lockdown and suddenly Ms Mantoo’s team of volunteers were “inundated with phone calls”.

“We’ve doubled the amount of food we serve on Fridays since lockdown restarted. Casual workers and families came to us saying they’d had to suddenly close their business or restaurant.” 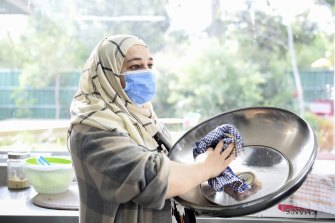 Khalida Rahim was two months pregnant when she and her husband lost their jobs last year.Credit:Penny Stephens

Chicken curry, rice, salad, beans and sweet tea were on offer at the community hall in Coburg last week. The volunteers have fine-tuned several recipes over the past 16 months, from pasta bake to pizza to vegetarian and vegan dishes.

“None of us are chefs. It’s home-cooked food for hundreds of people,” Ms Manto said. “Some weeks it’s turning 25 kilograms of meat into a meal, that can be a big challenge!”

At the end of last year, the group lost the council kitchen they had been cooking in. Determined not to stop their service even as life in Melbourne resembled normality, they moved to makeshift stoves and a gazebo in the carpark of their Coburg office.

The group also delivers food boxes to those who register an interest, like Khalida Rahim and her husband Sailaab. Ms Rahim called Ms Mantoo last April and explained the couple had both lost their jobs – an inconvenient scenario made worse by the fact Ms Rahim was two months pregnant.

“I’m part of the community and straight away I said I was interested to volunteer. And we still do it every week, helping them pack the boxes, trying to make it fresh and nice,” Ms Rahim said.

The food packs cover the essentials: milk, bread, rice, pasta, fruits, vegetables, herbs. Depending how much you like Mexican food, the taco seasoning in last week’s box could also be considered essential. 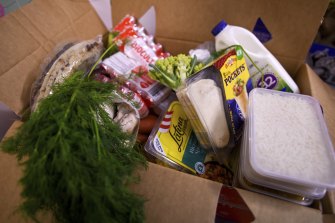 One of the food relief boxes prepared by the Muslim Women’s Council of Victoria.Credit:Penny Stephens

In the past fortnight Bronwyn Pike, chief executive of Uniting Victoria, has witnessed a similar boom in demand for emergency relief at Uniting’s numerous community centres.

The number of people visiting Uniting for the first time has risen 30 per cent.

“In the west, in the council areas of Wyndham and Broadmeadows, that’s particularly noticeable,” said Ms Pike, who was a minister in the Brumby government. “It’s families seeking assistance not just for food but to pay utility bills, cover their rent and to have enough money to pay for medicine.”

The state government released a $30 million package for food and financial support on Monday, including for services such as Uniting and Foodbank Victoria. Beyond that, state support has been aimed at businesses, while the federal disaster payment for employees who suddenly lost work was set to expire at 11.59pm Thursday after just one week.

Many Victorians, Ms Pike said, have slipped through the cracks.

“Sometimes it’s as simple as giving people petrol vouchers so that they can get to their next work shift.”

The Salvation Army’s Bourke Street headquarters have offered similar support, asking casual workers and international students to reach out if they need packs of 10 frozen meals delivered to their door. About 400 were delivered on Monday this week, for a service that didn’t exist a fortnight ago.

Charity and support workers have scarcely wavered in any of Melbourne’s four lockdowns – nor has Ms Mantoo, and nor does she plan to.

“She’s always positive, looking on the bright side, doing the best with what we’re given. You can imagine how valuable that has been, especially the last two weeks.”