Rome: Italian Prime Minister Giuseppe Conte is planning to resign on Tuesday, local time, in a move that prolongs the country’s political chaos and risks complicating the coronavirus response.

Conte’s office said in a statement Monday night that Conte will inform his ministers that he is stepping down and will then meet with the country’s president, Sergio Mattarella, to “tender his resignation.“

Conte’s decision leaves Italy with no straightforward path to reestablishing a workable government, all while the country tries to manage the pandemic’s health crisis and a campaign that has slowed because of Pfizer-BioNTech shortages. 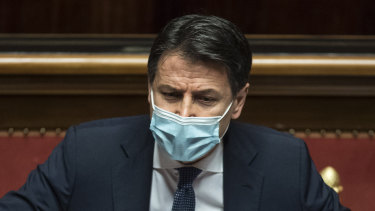 There is still a chance Conte could return as prime minister of a recomposed coalition. But, just as likely, a party that had recently defected from the government could return to the government – with somebody else replacing at the top. If those options fail, the country could usher in some kind of unelected unity government.

Or, Italians could be going back to the polls, where the far-right would be favoured to win power.

“It is painfully complicated,” said Giovanni Orsina, the director of the school of government at Luiss Guido Carli University in Rome. He said early elections remained the “least likely” of any scenario. But anything else seemed in play.

Italy over the past year has endured one of the world’s highest coronavirus death tolls, 85,000, while sustaining a collapse in tourism and a worst-on-record economic slowdown.

Although Italy has long been known for its short-timer prime ministers and regional divisions, Conte had become the face of a surprisingly top-down pandemic response, announcing lockdowns and decrees in late-night news conferences.

For a while, the pandemic had created an uneasy peace among Italy’s political factions. But that broke apart this month when a former prime minister, Matteo Renzi, pulled his small party’s support for the ruling coalition.

Renzi cited inadequacies in how the government was managing its economic recovery. But many pundits – as well as the majority of Italians – said Renzi was instigating the crisis out of his personal contempt for Conte, a fellow centrist whom he views as a competitor for voter support.

The move, though unpopular, has sapped Conte’s power.

Without Renzi’s support, a barely manageable, thin-majority government turned into a crippled minority government. Conte last week survived a confidence vote, but only because Renzi’s party abstained from participating.

That Conte made it through even 2 1/2 years as prime minister was a surprise. He was handpicked – as a lawyer with no political experience – to lead a populist coalition dominated in rhetoric by the far right. When that government broke apart, Conte stayed – this time to lead a pro-Europe government whose parties were explicitly trying to stave off elections and keep the far right out of power.

Orsina called Conte “a navigator, a very adaptable figure,” somebody who could reshape himself for different governments because he has no clear political ideology of his own.

Italy’s next government – and leader – will be decided in the coming days and weeks, with Mattarella, who has wide constitutional powers during periods of political crisis, overseeing the negotiations.

The two major far-right parties, the League and Brothers of Italy, which together have the support of about 40 per cent of Italians, have been saying that the only solution is a return to the polls. Smaller parties appear more open to a deal that avoids pandemic-time elections.

Silvio Berlusconi, the leader of Forza Italia, a modest centre-right party, said in a statement on Monday that, aside from elections, the only path was a “new government that represents the substantial unity of the country in a moment of emergency.”