After a revered ultra-Orthodox rabbi died this week from COVID-19, Israeli police thought they had worked out an arrangement with his followers to allow a small, dignified funeral that would conform with public health guidelines under the current coronavirus lockdown.

Followers of Rabbi Mordechai Leifer, 65, had been given special permission under Israel’s lockdown rules to include hundreds of people. The rabbi was the leader of a Hasidic sect founded in Pittsburgh, Pennsylvania about 100 years ago. He had led his followers in Ashdod for several decades.

But when it was time to bury the rabbi in the city of Ashdod on Monday, thousands of people showed up – ignoring social distancing rules and clashing with police who tried to disperse the mass gathering.

Such violations of lockdown rules by segments of the ultra-Orthodox population have angered a broader Israeli public that is largely complying with the restrictions imposed to halt a raging coronavirus outbreak. 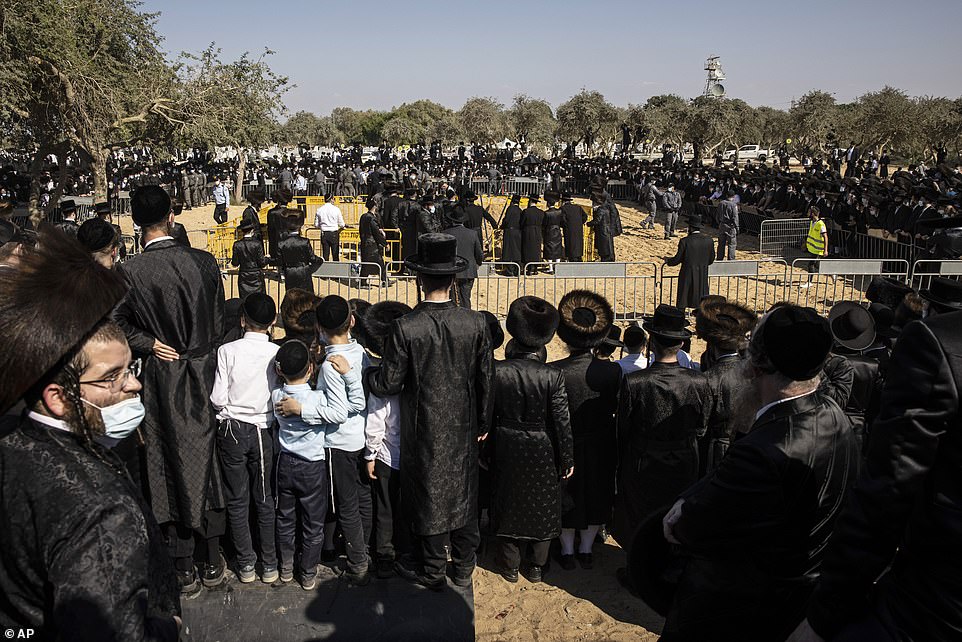 Thousands of ultra-Orthodox Jews turned up to the funeral of a revered rabbi in the city of Ashdod on Monday. Followers had been given special permission for hundreds of people to attend Rabbi Mordechai Leifer’s funeral but many, many more showed up 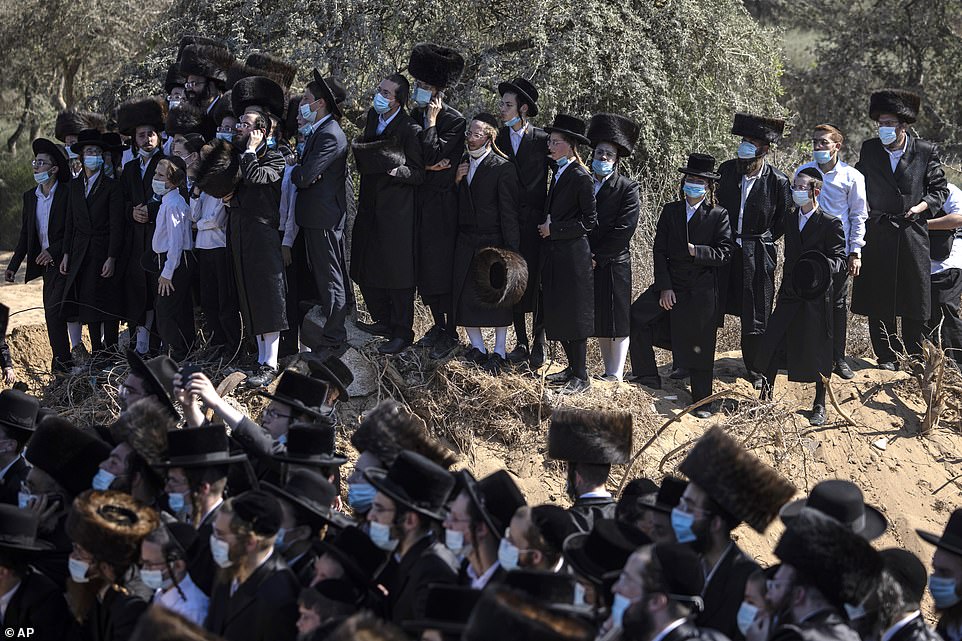 The defiance shown by some members of Israel’s ultra-Orthodox community has confounded public health experts and triggered a new wave of resentment from secular Israelis, causing some to worry about unity in the country once the pandemic is over

The defiance on display has confounded public health experts, tested Prime Minister Benjamin Netanyahu’s longstanding political alliance with religious leaders and triggered a new wave of resentment from secular Israelis who fear for their health and livelihoods.

‘We’ve been asked to go into this lockdown, with its insane economic cost, that is causing people to go insane, because of the increase in coronavirus which is mostly occurring in the ultra-Orthodox sector and in large part because of criminal negligence,’ wrote media personality Judy Shalom Nir Mozes on the Ynet news site.

‘There are two sets of laws here. One for us and one for them.’

The ultra-Orthodox claim they are being unfairly targeted by they authorities. They point to large weekly protests, mainly by secular Israelis, against Netanyahu’s handling of the pandemic that have continued throughout the summer.

Only last week, the government finally placed limits on the size of the protests, citing violations of public health guidelines.

‘We are at the closest point to an explosion in terms of the mistrust,’ said Israel Cohen, a commentator with the ultra-Orthodox radio station Kol Barama. 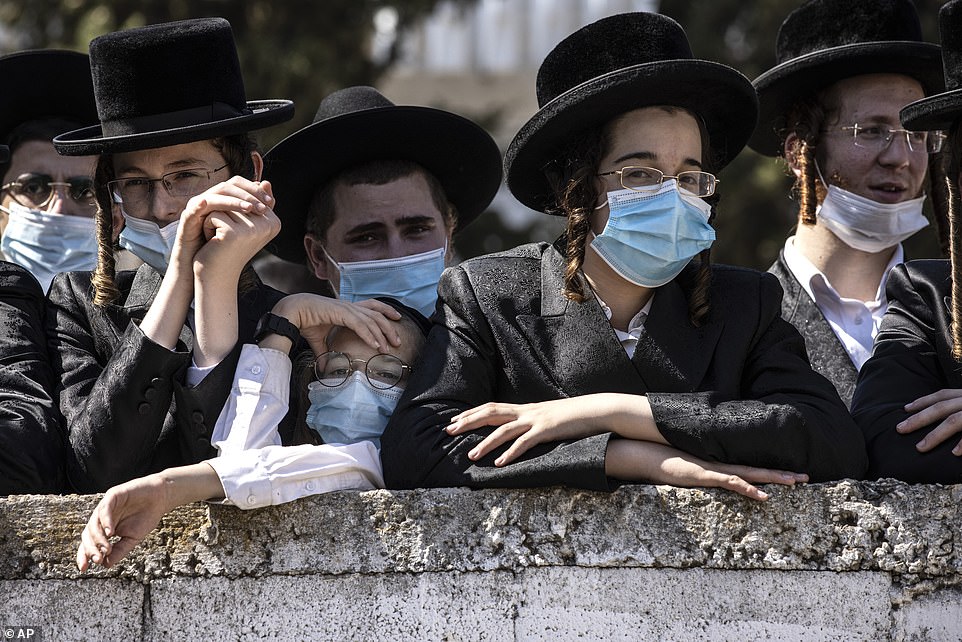 The ultra-Orthodox community says it has been unfairly targeted by Israel’s second lockdown, pointing out that weeks-long mass protests against the government’s handling of the pandemic have been allowed to continue without police intervention until recently, while their own religious and social gatherings have been curtailed

A deep chasm has long divided religious and secular Israelis, wrought by years of seemingly preferential treatment for the ultra-Orthodox who are granted government stipends to study full-time.

Ultra-Orthodox support is the lifeblood of Netanyahu’s coalition and has helped secure his position as Israel’s longest-serving leader.

The country, which has a population of about 9 million people, is battling one of the world’s worst coronavirus outbreaks on a per capita basis.

Its ultra-Orthodox community, which makes up roughly 10% of the population, accounts for more than one-third of the country’s coronavirus cases. 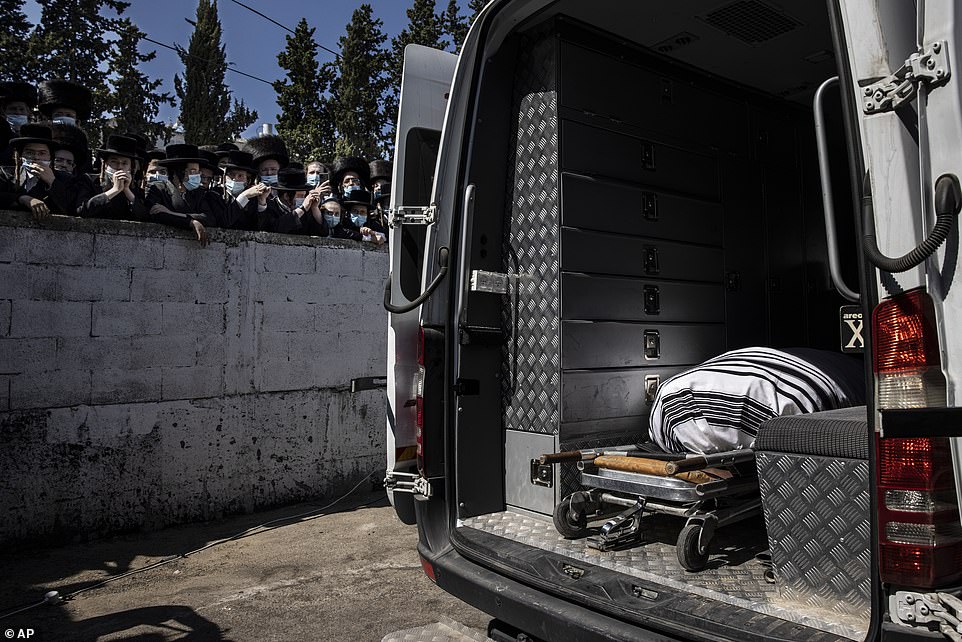 Rabbi Mordechai Leifer, whose body is seen here in an ambulance, was buried in the port city of Ashdod on Monday. He had been the leader of a Hasidic sect founded in Pittsburgh, Pennsylvania about one hundred years ago and led a group of about a dozen families in Ashdod for several decades before his death

In the last week, Israel has seen highs of 9,000 new virus cases a day.

It has recorded more than 272,000 confirmed cases and more than 1,700 deaths from the coronavirus since the beginning of the pandemic earlier this year.

The current spike comes during the Jewish High Holidays, a time when the faithful usually pack synagogues and hold large family gatherings – settings that officials feared would ramp up the country’s already soaring infection rates.

Israel imposed a second nationwide lockdown ahead of the Jewish New Year last month, aiming to keep people at home.

But parts of the ultra-Orthodox, or Haredi, community have defied those limits, holding massive holiday events, moving back and forth between cities and keeping some schools and synagogues open despite orders to close down.

Despite appeals by some lawmakers and community leaders for compliance, the current harvest holiday of Sukkot has presented another obstacle to enforcing lockdown measures. 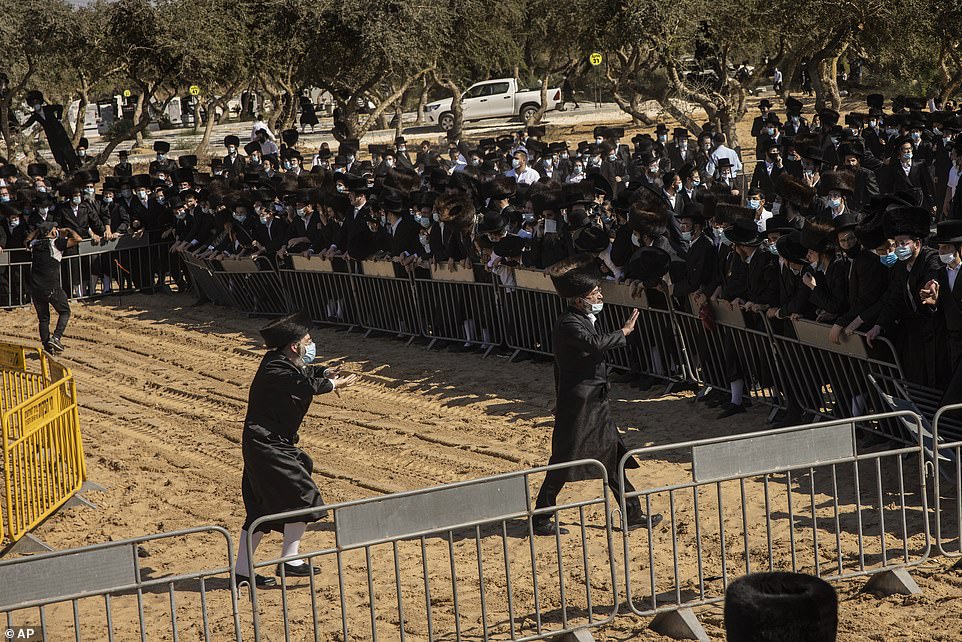 Ultra-Orthodox officials try to enforce social distancing among mourners at the funeral of Rabbi Mordechai Leifer but many in attendance flouted safety measures. Social and religious gatherings are integral to the ultra-Orthodox community’s way of life 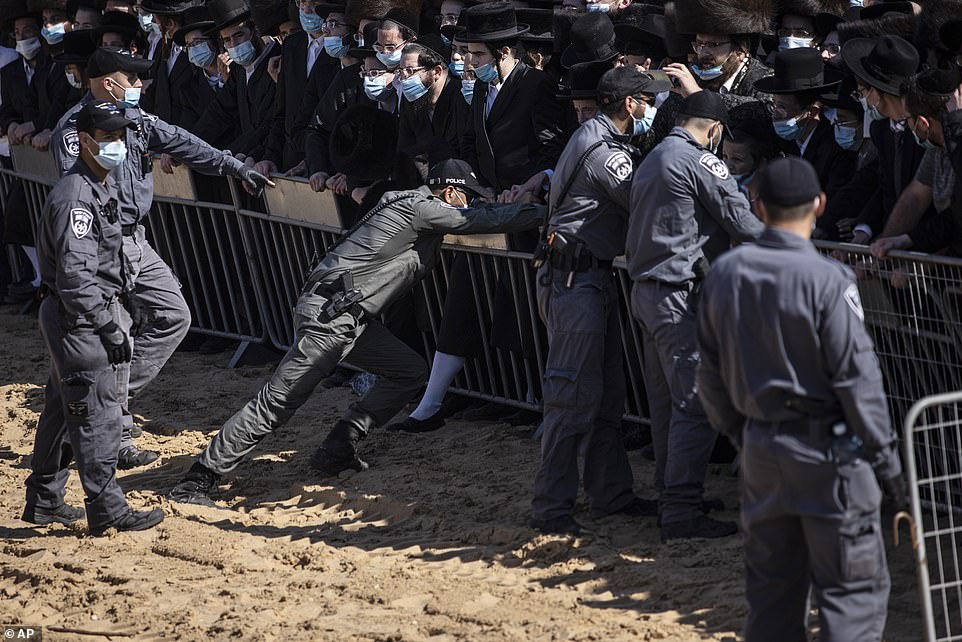 Police clashed with mourners as they tried to control the crowd gathered in Ashdod on Monday to pay their respects to the late rabbi who himself died of coronavirus. Some secular Israeli’s have accused the police of turning a blind eye to infractions by the ultra-Orthodox community

‘It disturbs us,’ Israel’s coronavirus czar Ronni Gamzu said last week of the high morbidity, after revealing the ultra-Orthodox made up 40% of the country’s total cases.

The ultra-Orthodox have been at the centre of the outbreak since it began in the spring.

They tend to live in poor, crowded neighbourhoods where sickness can quickly spread.

Synagogues, the centrepiece of social life, bring men together to pray and socialise in small spaces.

Large parts of the community are adhering to rules. But some ultra-Orthodox view the restrictions as a greater threat than the virus, fearing the lockdown restrictions will undermine their way of life.

The cloistered community has long been separate from mainstream Israeli life, with children studying scripture but very little maths and English.

Men are granted exemptions from military service, which is compulsory for other Jews, and some avoid the workforce while collecting welfare stipends to continue to study full time. 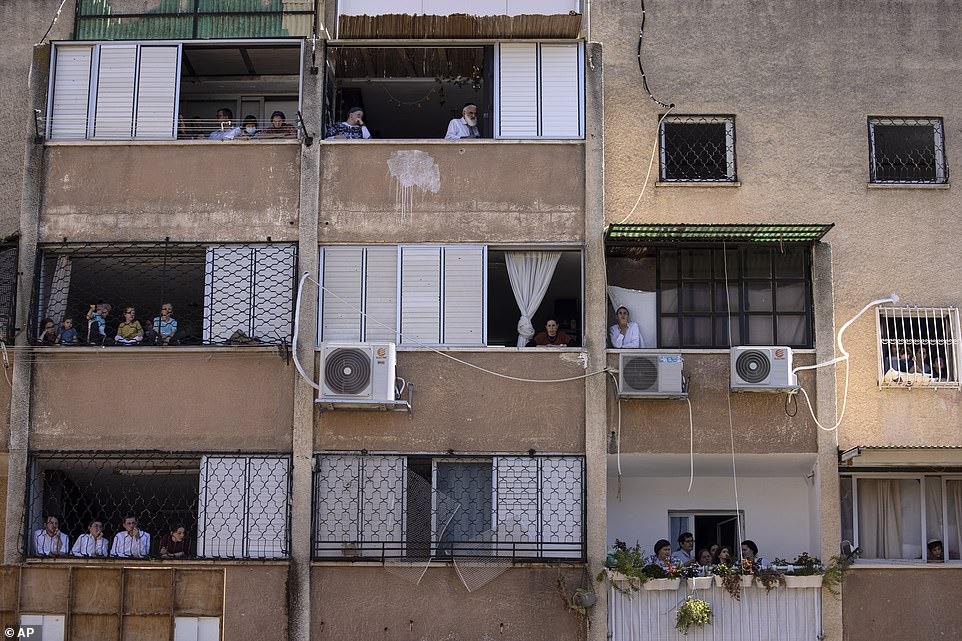 Mourners also gathered on balconies to observe the funeral without breaking the lockdown rules in place in Israel, which is facing one of the world’s worst coronavirus outbreaks, recording highs of 9,000 cases a day

The community’s representatives in parliament have acted as kingmakers, granting them disproportionate political power.

Netanyahu has been slammed for his handling of the coronavirus crisis, including for having imposed virus restrictions that critics say favour his ultra-Orthodox partners.

Gamzu had pushed for targeted lockdowns in early September, focused on areas with worrying outbreaks, including many ultra-Orthodox communities.

But after fierce pressure from ultra-Orthodox leaders, Netanyahu decided against such measures and instead imposed a nationwide lockdown weeks later.

Pointing to continued mass weddings and study sessions among the religious, Lapid said that ‘before they harm the general public, they are harming themselves.’

Secular Israelis have watched with exasperation as police have ticketed individuals not wearing masks or restaurants opening in defiance of the rules, while seemingly turning a blind eye to the transgressions of the ultra-Orthodox.

In recent days, however, police have begun to crack down on religious scofflaws as well.

Netanyahu’s opponents also accuse him of trying to squash the persistent protests against him, including outside his Jerusalem home, under the guise of the nationwide lockdown.

Experts say any gains made in recent years at integrating the ultra-Orthodox into Israeli society – a crucial step to ensure the sustainable growth of Israel’s economy – could be wiped out by the renewed bitterness wrought by the virus.

‘The coronavirus will disappear at some point,’ said Yedidia Stern, an expert on religion and state at the Israel Democracy Institute, a Jerusalem think tank. ‘But what kind of society will we be after it?’