Jerusalem: Dozens of people were injured, some seriously, in a stampede at a Jewish religious gathering in northern Israel attended by tens of thousands of people, Israel’s main rescue service said early Friday.

SkyNews reported that more than two dozen people died in the event.

Magen David Adom tweeted that it was treating 50 people, including 20 in critical condition. Israeli media had earlier reported that a grandstand collapsed, but the rescue service said the injuries were caused only by a stampede. 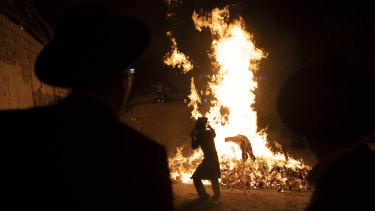 Ultra-Orthodox Jewish youths stand next to a bonfire in Jerusalem, to mark the Lag Ba’Omer holiday, marking the end of a plague said to have decimated Jews during Roman times. Credit:AP

Tens of thousands of people had gathered at the foot of Mount Meron to celebrate Lag BaOmer, a Jewish holiday honoring Rabbi Shimon Bar Yochai, a 2nd Century sage and mystic who is buried there.

It was the first huge religious gathering of its kind to be held legally since Israel lifted nearly all restrictions related to the coronavirus pandemic.

The country has seen cases plummet since launching one of the world’s most successful vaccination campaigns late last year.