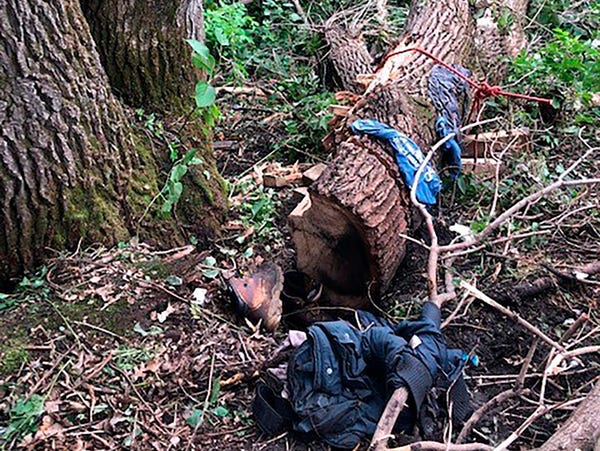 A 59-year-old man from southern Minnesota has been rescued after he was trapped under an oak tree for four days, officials have said.

Jonathan Ceplecha was cutting down trees on his land near Redwood Falls on August 27, when one of them fell and landed on both of his legs, pinning them to the ground, according to the Redwood County Sheriff's Office.

His son, Miles Ceplecha, told the Associated Press (AP) that his father, who is an Iraq War veteran, "tried to keep his mind distracted" while he was pinioned to the floor for so long.

"I was with him Monday in the hospital and he was kind of getting how he was able to keep from panicking, which was by breaking up the days into hours and then breaking up the hours into 5-minute segments so that he could have little victories throughout the day that would give him little pieces of hope," Miles said, according to AP.

Deputies were alerted on Monday after Ceplecha did not show up for work. When they found no sign of him, a team helped by the 59-year-old's ex-wife and daughter, started searching the property.

Ceplecha was found conscious and alert on Monday about 100 yards away from his house, according to Chief Deputy Mark Farasyn. It took the Redwood Falls Fire Department two hours to free Ceplecha.

"He had the will to live, and he wasn't ready to go," Farasyn said, according to AP. Farasyn believes it was Ceplecha's background and training that probably helped him survive.

Ceplecha, who was airlifted to a nearby hospital, is in stable condition.