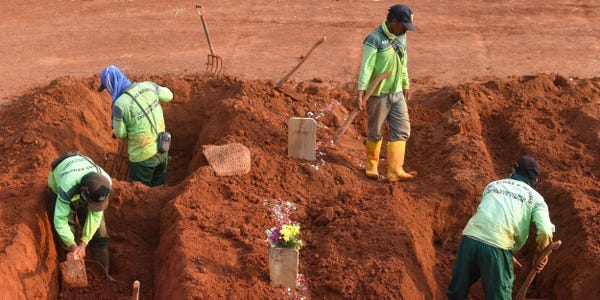 Residents of a village Indonesia caught flouting the country's mask requirement put in place to help prevent the spread of the coronavirus are being put to work digging graves for COVID-19 victims.

Authorities in the Cerme district of Gresik Regency, East Java, told CNN that they are forcing anti-maskers to dig graves in an attempt to convince others to wear protective face coverings.

So far, three middle-aged men and five minors have been handed the punishment.

Cerme's leader, who was identified as Suyono by the Tribun News, an Indonesian news site, said that the region has a shortage of gravediggers.

"There are only three available gravediggers at the moment, so I thought I might as well put these people to work with them," he told Tribun News, translated by the Jakarta Post. "Hopefully, this can create a deterrent effect against violations."

Suyono, who according to CNN only goes by one name, said the mask violators would not be burying bodies and would only be digging the graves.

He said people not wearing masks can also face other punishments, like paying a 150,000 rupiah ($10) fine, cleaning up public areas, or doing push-ups.

Indonesia has had more than 233,000 COVID-19 cases since the pandemic began, and more than 9,000 people in the country have died from the virus.

In recent weeks, Indonesia has seen an uptick in cases, though it's unclear if punishments like those in Cerme and Jakarta, where officials are placing empty coffins in public areas, have encouraged people to follow mask rules.

According to The Telegraph, Indonesia's government has been criticized for its handling of the virus, by people who say officials responded to the country's COVID-19 outbreak too slowly.