India sees its highest single-day jump in coronavirus cases with 3,900 new infections as country puts 70% tax on booze after alcohol ban was lifted

India saw a record 3,900 new coronavirus cases and 195 more deaths today – while New Delhi imposed a special 70 per cent tax on alcohol to clamp down on stockpiling after a ban on liquor was lifted.

The country of 1.3billion saw its total number of cases rise to 46,432 while the death toll is now 1,568, the health ministry said.

India’s infection count has risen by an average of 6.1 per cent over the last week, behind Russia and Brazil but higher than the UK, US or Italy.

Health experts say the increase shows that India remains at risk of a devastating outbreak despite a severe month-long lockdown. 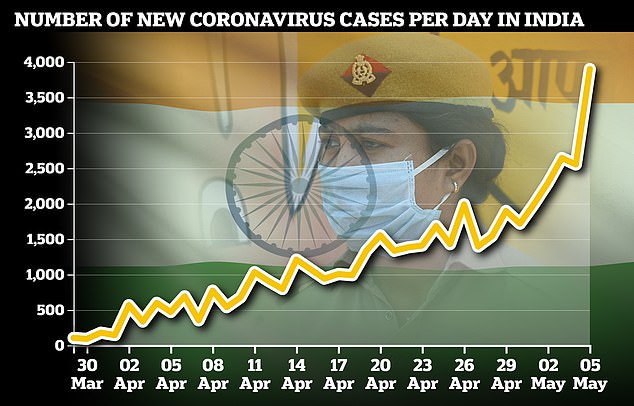 The number of new cases in India surged to 3,900 today, bringing the total number of cases to 46,432 in a country of 1.3billion people 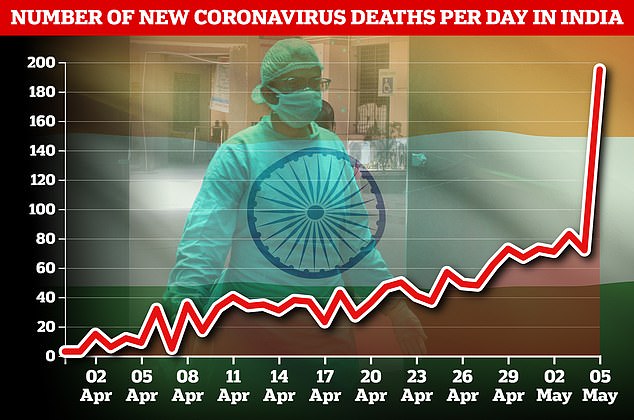 India also saw an unprecedented spike in the number of deaths with 195, bringing the country’s total death toll to 1,568 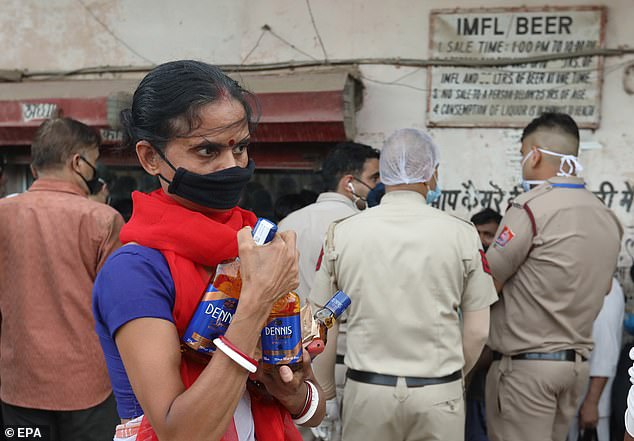 A woman wearing a face mask carries bottles of Dennis whisky from a liquor store in New Delhi, after a coronavirus-related ban on alcohol was lifted in India 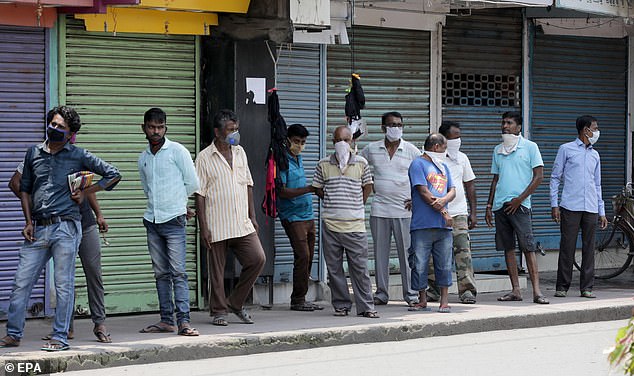 People wait in a queue outside a liquor store in Kolkata today, with the ban being lifted across India while the lockdown of 1.3billion people otherwise remains in force

The biggest spikes were recorded in the western states of Maharashtra, home to India’s commercial capital of Mumbai, and Gujarat as well as Delhi.

‘The curve has not shown a downward trend. That is cause for concern,’ said Dr Randeep Guleria, director of New Delhi’s All-India Institute of Medical Sciences.

Government officials said the lockdown had helped avert a surge of infections that could have overwhelmed medical services.

Now cases are doubling every 12 days, up from 3.4 days when the lockdown began, said Lav Agarwal, a joint secretary in the health ministry.

‘Lockdown and containment are yielding results, the challenge is now to improve on the doubling rate,’ he added.

The lockdown has been eased to allow the sale of alcohol, but the measure prompted large gatherings at liquor stores in Delhi and elsewhere. 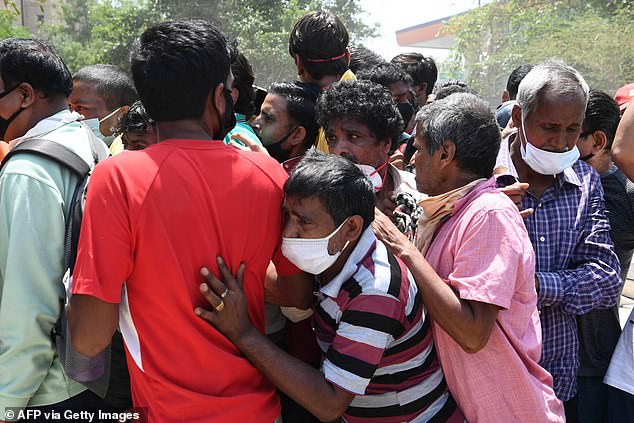 People crowd around an alcohol store in New Delhi today, failing to keep any kind of social distance between them 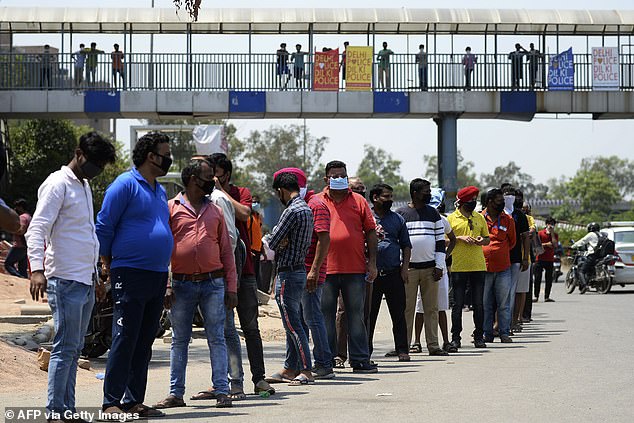 People queue to buy alcohol in New Delhi today, watched by people walking over a footbridge 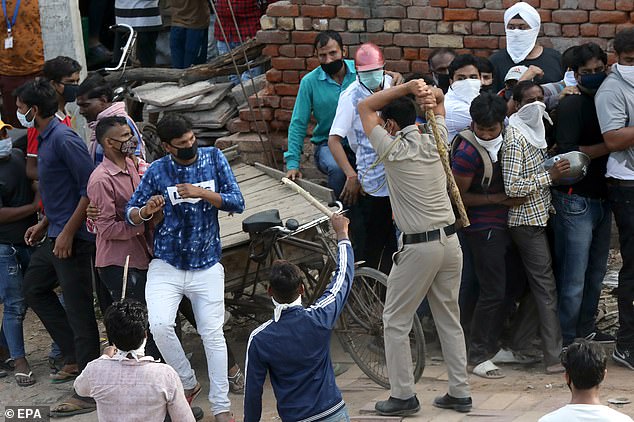 Police baton-charged hundreds of people who had flocked to liquor shops when they opened on Monday.

The Delhi state government announced a ‘special corona fee’ of 70 per cent on alcohol sales in a public notice late on Monday.

Taxes on alcohol are a key contributor to the revenue of many of India’s 36 states and federal territories, most of which are running short of funds.

‘It was unfortunate that chaos was seen at some shops in Delhi,’ said Arvind Kejriwal, the state’s chief minister.

‘If we come to know about violations of social distancing and other norms from any area, then we will have to seal the area and revoke the relaxations there,’ he added.

Other states such as Andhra Pradesh, where people also violated social distancing measures to queue up in their hundreds for alcohol, have also hiked prices. 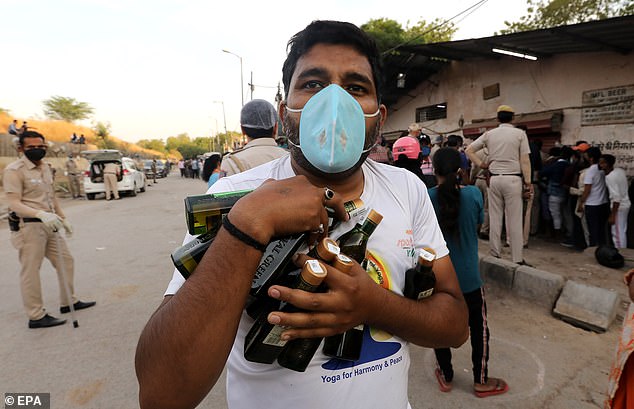 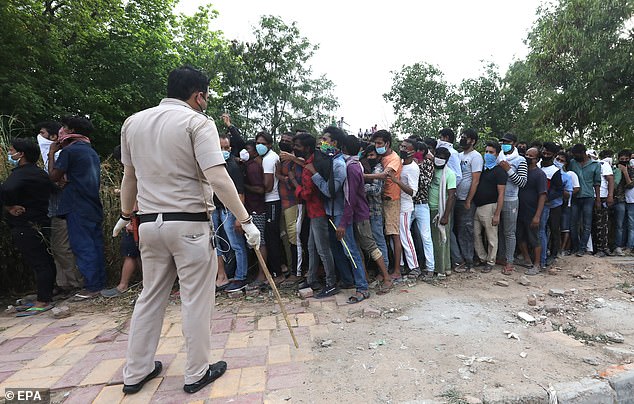 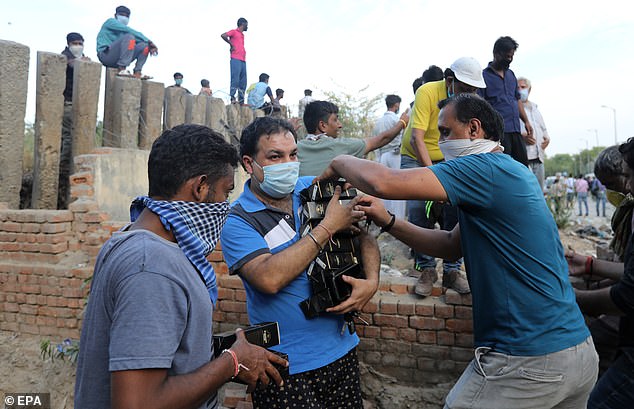 Three men carry their new supplies after buying alcohol at a store in New Delhi, which is now trying to clamp down on stockpiling

The wider lockdown which was announced by prime minister Narendra Modi at the end of March is set to run until May 17.

All domestic and international travel is banned, factories and offices are shut along with schools, and migrant workers have been moved to quarantine centres.

The country’s land borders with Bangladesh, Bhutan, Myanmar and Nepal have all been closed. The border with Pakistan is heavily controlled in any case.

India’s death rate of 1,568 fatalities from 46,432, or 3.4 per cent, is lower than in some European countries such as the UK and Italy, although not Germany.

Only six per cent of people in India are aged over 65, compared to 18 per cent in Britain and 16 per cent in the United States, which may be an advantage against a virus which is most dangerous to the elderly.

However, experts fear there could be a large tally of ‘missing’ deaths among people who died at home.