Dallas: Wintry weather is forecast for much of the US on Sunday, (Monday AEDT) with freezing temperatures expected to dip as snow falls as far south as Texas’ Gulf Coast.

“Typically, we just don’t have quite this much cold air in place that far south,” said Marc Chenard, a meteorologist with the National Weather Service’s Weather Prediction Centre.

The storm has prompted officials in Houston, where temperatures were in the 20s Celsius earlier this week, to advise residents to prepare for power outages and hazardous roads that could be similar to those experienced in the wake of a Category 5 hurricane. Temperatures were expected to drop to below freezing there by Sunday night. 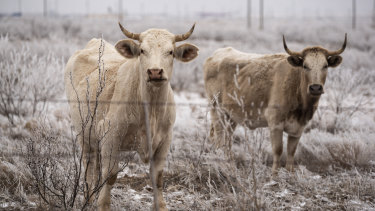 A pair of bulls roam a field as they graze with the rest of their herd in Midland, Texas.Credit:AP

He said significant ice and up to 30 centimetres of snow were expected across parts of the southern Plains on Sunday and into Monday, with the most snowfall expected near the Oklahoma-Texas border.

Winter weather conditions are affecting large portions of the US, but it is rare for them to extend so far south, Chenard said.

The Dallas area had a covering of snow by Sunday morning, with flakes still falling, and as much as 15 centimetres was forecast. 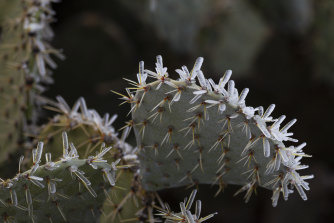 Ice clings to the spines of a prickly pear cactus.Credit:AP

“We’re looking at potentially over a quarter inch of freezing rain, and that will cause significant impact,” Chenard said. “We may even see some freezing rain get as far as New Orleans by early Monday.”

Texas Governor Greg Abbott, who issued a disaster declaration for all of the state’s 254 counties, warned on Saturday: “All of Texas is facing an extremely dangerous winter storm.”

The weather was affecting operations at airports across the area, with more than 700 flights cancelled at Dallas-Fort Worth International Airport, and at Dallas Love Field most of the flights for Southwest Airlines, the airport’s main carrier, were cancelled.

American Airlines said about 345 of their flights were cancelled at Dallas-Fort Worth Airport, its hub, on Sunday, The airline said the storm was also affecting their flights across the region, with operations reduced and cancelled at airports across Texas, Oklahoma and Arkansas.

Meanwhile, in the Pacific Northwest, tens of thousands of people were without power after a winter storm blanketed the region with ice and snow and made travel treacherous.