Businesses at the base of Sydney's harrowed Mascot Towers have been caught between the directives of a government minister and the building's owners corporation, which has given them a week's notice to vacate over safety issues.

The owners of seven shops say they will lose everything if they are forced to close a week before Christmas, following a letter from the lawyers for the owners regarding unstable facades of the structures. 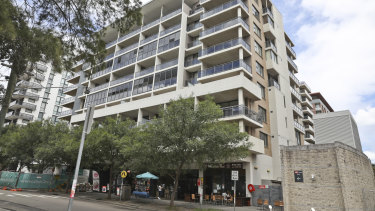 Businesses at the base of the Mascot Towers apartment block been ordered to vacate by December 18.Credit:Ben Rushton

The letter, which has been seen by the Herald, states the owners' corporation had been advised by engineers that the façades of the buildings are leaning and unstable, and genuine safety risks to the public had been identified on both the Bourke and Church street boundaries.

The letter says a SafeWork improvement notice required the owners corporation to erect hoarding and exclude public access to the site, including access to all commercial and retail lots.

"As compliance with the SafeWork Notice is required by 18 December 2020, the Owners Corporation is currently arranging for an exclusion zone to be established on that date," the letter says.

"You should assume that as and from 18 December 2020 your lot will no longer be accessible. Owner occupiers and tenants will not be able to trade from the lot for an indefinite period of time from this date."

The improvement notice attached to the letter does not specifically mention the need to evacuate, but states people may be injured by falling bricks and rubble and says an exclusion zone is one of multiple solutions to the problem.

Ward Mellick, a co-owner of an IGA store and attached cafe and bottle shop in the Mascot Towers complex, said it would be impossible to move the business's assets and stock in six days.

"There's no way you can just go and find a place overnight and re-establish your business," Mr Mellick said. "A week before Christmas, that's 70 people out of work."

But a spokesperson for the NSW Minister for Better Regulation, Kevin Anderson, said the improvement notice didn't require any retailers to close.

"There are a range of measures that can be implemented that will ensure compliance," the spokesperson said, adding SafeWork was working with the owners corporation and the businesses "to ensure the safety of workers and patrons and the continued safe operation of the retail premises".

The owners of Mascot Towers are seeking several million dollars in damages from the developer of a neighbouring building they allege is responsible for major cracks appearing in the apartment complex they were forced to evacuate in June 2019, with a hearing scheduled in the NSW Supreme Court last week.

The owners corporation alleges in court documents that deep excavation work for the Peak Towers basement car park led to the foundations of its building being compromised and unable to support the loads bearing down on it.

But the construction group, Aland Developments, has previously claimed Mascot Towers was plagued by structural damage before they started work.

The evacuation of residents from Mascot, and severe cracking in the Opal Tower at Sydney Olympic Park earlier, sparked a NSW parliamentary inquiry into building standards, and led the government to appoint a building commissioner.