This is the moment a large waterspout formed off the coast of Thailand as beachgoers relaxed seemingly unaware of the tornado cloud on the horizon.

The watersprout stretched from dark grey clouds into the ocean in Chonburi province, in eastern Thailand, shortly after 3pm on Wednesday.

By the time it was captured on camera, the waterspout, had turned into a mature vortex reaching maximum intensity, making a funnel shape. 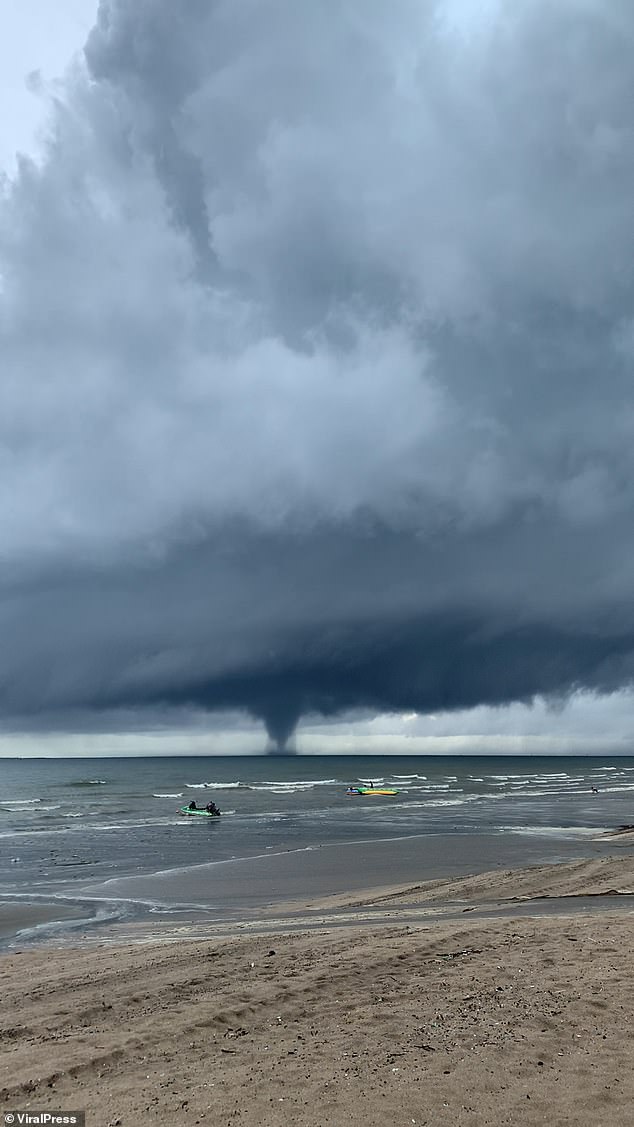 Waterspouts are intense columns of swirling tornado clouds that form over a body of water.

It could be seen rising several hundred feet into the air as beachgoers continued to  swim and float in dinghies in the water, while others relaxed on the sand.

At one point someone rides through the water’s edge on a bike.

Waterspouts are most commonly found in subtropical areas and disappear shortly after they come into contact with land.

The region has been battered with heavy rain along with overcast and humid weather over the last few days.

It could be seen rising several hundred feet into the air as beachgoers continued to swim and float in dinghies in the water, while others relaxed on the sand. At one point someone rides through the water’s edge on a bike

Hundreds of homes have been damaged from the storms and many streets have flooded.

The Thai Meteorological Department forecast heavy rainstorms throughout the country weakening by the weekend.

WATERSPOUTS: DEADLY FUNNELS THAT CAN RISE HUNDREDS OF FEET

What are they and why do they form?

Waterspouts are whirling columns of air and water mist.

They form when cumulus clouds grow rapidly. These clouds are detached, fluffy-looking and cauliflower-shaped.

Cumulus clouds develop due to convection. This is when hot air rises and cools to form water vapour, which then condenses to form clouds.

They fall into two categories: ‘fair weather’ and ‘tornadic’

These are tornadoes that form over water, or move from land to water, and develop downwards during thunderstorms.

They have the same characteristics as a land tornado and can be accompanied by high winds and seas, large hail and lightning.

These usually form along the dark flat base of a line of developing cumulus clouds and develop upwards from the surface of water.

They are generally not associated with thunderstorms and form in light wind conditions so don’t move very much.

The five stages of formation

1. Dark spot: A light-coloured disk appears on the water’s surface surrounded by a larger darker area

2. Spiral pattern: A combination of light and dark patches on the water spiral out from the dark spot

3. Spray ring: A ring of sea spray appears around the dark spot

5. Decay: The funnel and spray vortex begin to dissipate as the inflow of warm air into the vortex weakens