‘I’m sorry Gentlemen, you deserve better luck’: How two Luftwaffe pilots who met in Cumbria PoW camp stole an RAF plane but ran out of fuel over Norfolk… only to get slap-up meal for their bravery after finally being caught

When Allied prisoners who were subject of the classic film The Great Escape were captured by the Nazis in the Second World War, more than half of them were shot.

But when two German airmen who were prisoners of war in Britain were caught while trying to escape the UK, they were given a hot meal by soldiers and told, ‘I’m sorry gentlemen, you deserve better luck.’

The story of how German pilots Leutnant Heinz Schnabel and Oberleutnant Harry Wappler escaped from their Cumbria camp before stealing a plane has been told by historian Dr Mark Felton on his popular Youtube channel.

He recounts how, after launching the daring plot in November 1941, the men tried to fly to the Nazi-occupied Netherlands, more than 300 miles away, but ran out of fuel a few miles east of the Norfolk coast.

They were forced to land at Scratby, near Great Yarmouth, but used their fake identities as Dutch RAF pilots to convince a policeman to put them in touch with the RAF base Horsham St Faith, where they hoped to refuel.

The men got as far as being given overnight living quarters – where they had a hot bath – before their deception was discovered and they were imprisoned once more.

Dr Felton said: ‘The British admired the Germans’ pluck and gave them a send-off dinner in the officers’ mess.’

The station commander then handed them over to RAF police after issuing his ironic apology. 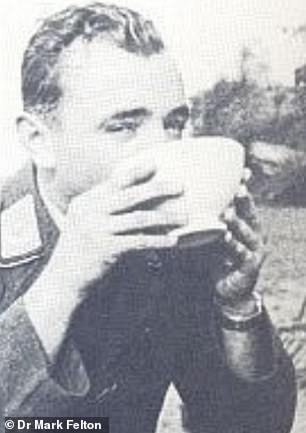 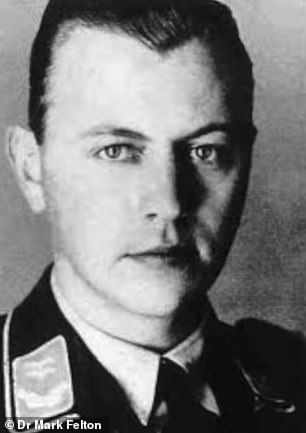 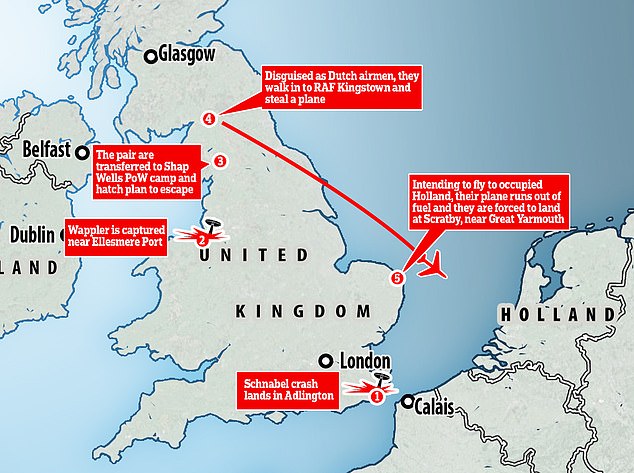 The men tried to fly to the Nazi-occupied Netherlands but ran out of fuel and so landed in the village of Scratby, near Great Yarmouth. They then ended up at RAF Horsham St Faith, were they enjoyed baths before their deception was uncovered

His luck ran out when, while escorting a force of Heinkel 111s and Dornier 17 bombers during a raid on Britain, his Messerschmitt 109 fighter plane was damaged.

He was forced to crash land in a field near Adlington, in Kent. A stunning image shows his stricken plane on its belly in the dirt, its bent propellor lying motionless.

After recovering from injuries sustained in the crash, Schnabel was first interrogated at the prisoner-of-war facility known as the London Cage in Kensington Palace Gardens.

He was then sent to No 1 POW Camp at the commandeered country home Grizedale Hall, in Cumbria, where he met fellow German pilot Wappler.

Wappler had been captured five days after Schnabel when, while carrying out a bombing raid over Ellesmere Port, near Liverpool, his Heinkel 111 was downed by a barrage balloon cable. 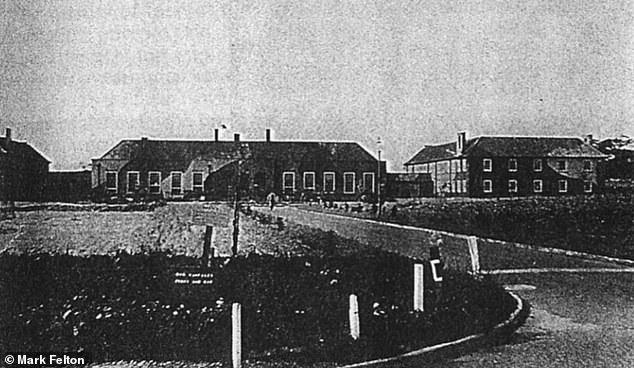 They used their fake identities as Dutch RAF pilots to convince a policeman to put them in touch with the RAF base Horsham St Faith (pictured), where they hoped to refuel

The pilot broke his arm and was knocked unconscious after he bailed out from his plane and landed in a street in Newport.

He and Schnabel bonded over a shared determination to escape and, when they were transferred to a new camp in Spring 1941, they began to plot how they would do so.

The prisoners were often taken out for exercise, enabling Schnabel and Wappler to carry out reconnaissance.

They discovered that the mainline railway running from London to Glasgow ran close to the camp and that a steep incline on the line, known as Shap Bank, forced trains to slow to a walking pace.

They also noticed how RAF Miles Magister training aircraft would regularly fly over the camp, on their way to the RAF Kingstown airfield, which was around 30miles away and just north of the city of Carlisle.

The airmen decided that their best hope of escape was to pose as Dutch airmen who could believably be mistaken for two of the thousands of foreign pilots who were flying for the RAF. 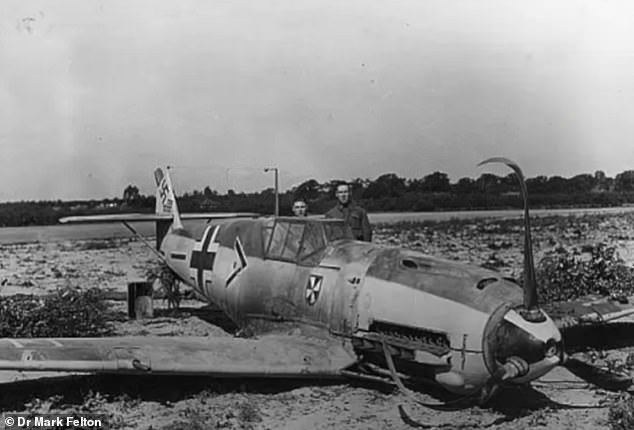 Schnabel was a fighter ace who had downed six Allied aircraft in combat – three Spitfires and three Bristol Blenheim light bombers. His luck ran out when, while escorting a force of Heinkel 111s and Dornier 17 bombers during a raid on Britain, his Messerschmitt 109 fighter plane was damaged. He was forced to crash land in a field near Adlington, in Kent. Pictured: His plane 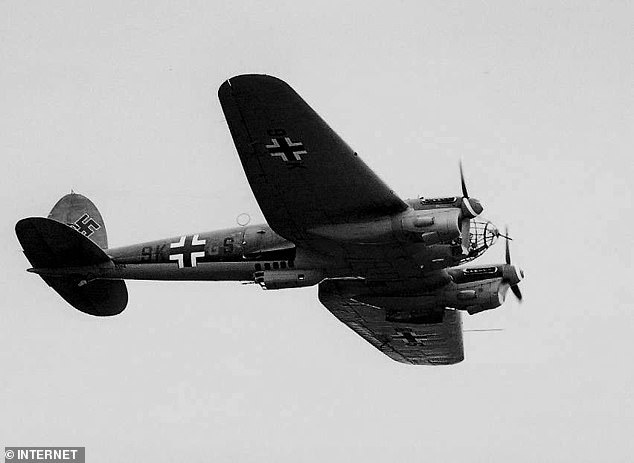 Wappler had been captured five days after Schnabel when, while carrying out a bombing raid over Ellesmere Port, near Liverpool, his Heinkel 111 (file photo) was downed by a barrage balloon cable

They would then jump on a train as it slowed at Shap Bank and journey up to RAF Kingstown, where they would look for a plane to escape in.

Under the cover of thick fog, the men put their plan into action on the night of November 24, 1941.

Wearing fake RAF uniforms, they first hid in a specially hollowed-out log pile which had been prepared in the camp’s grounds by fellow prisoners – who also later helped to conceal their missing comrades’ absence from roll calls and room checks.

Both men could speak enough English to pass as Dutch officers.

Once night had fallen, the men crept along an irrigation ditch and used homemade tools to cut through the perimeter fence – the thick fog masking their escape.

They then waited until a goods train slowed down at Shap Bank and climbed aboard for a free ride to Carlisle.

They then casually joined RAF personnel who were making the two-mile walk to RAF Kingstown and, using their uniforms and fake passes, strolled straight in on arrival. 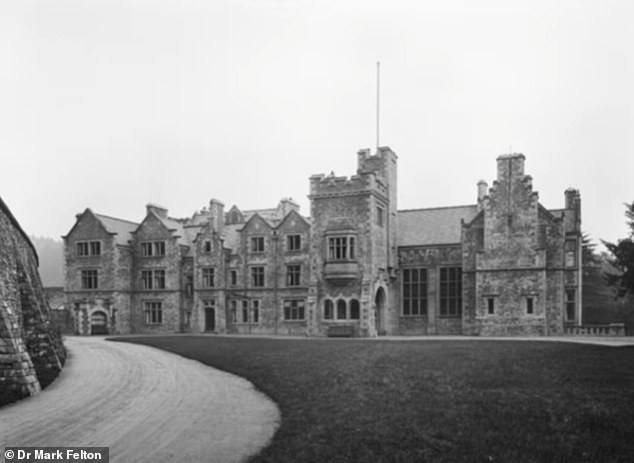 The two pilots met at No 1 POW Camp at the commandeered country home Grizedale Hall, in Cumbria 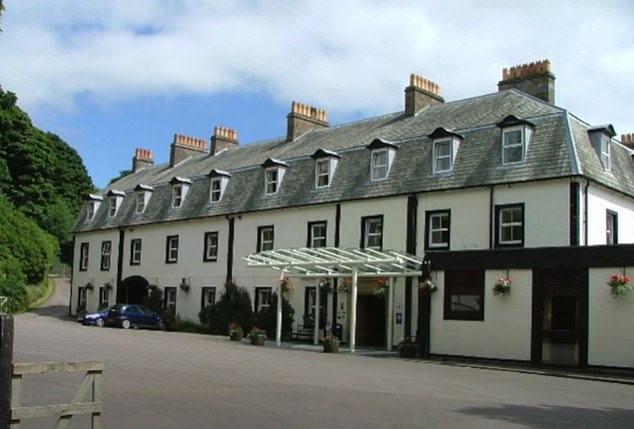 The men were transferred to a new camp in Spring 1941 and began to plot how they would escape. Their new prison was the converted Shap Wells Hotel (pictured), 25 miles east of Grizedale. The former luxury accommodation now had armed sentries, a barbed wire fence and searchlights

In the morning, they spotted a Miles Magister plane on the far side of the airfield and convinced a young mechanic’s apprentice that they were there to carry out a taxiing test.

He started up the aircraft for them and then watched in amazement as they flew off. The station commander at Kingstown was informed about the theft, but the men had not yet been recognised as being members of the Luftwaffe.

However, the cruising speed of the plane was just 123 miles per hour and, whilst it had a maximum range of 380miles, the tank was not full.

Both Germans were also not equipped for flying in the middle of winter and did not have helmets, goggles or flight suits.

The men initially considered flying to the Republic of Ireland, which was not involved in the war. But they quickly decided they were likely to be interned and so instead headed for Nazi-occupied Holland.

The distance – 365 miles – was a stretch but the men hoped they would have enough fuel.

They flew across the Wash – the bay and estuary at the north-west corner of East Anglia – before heading out to sea. 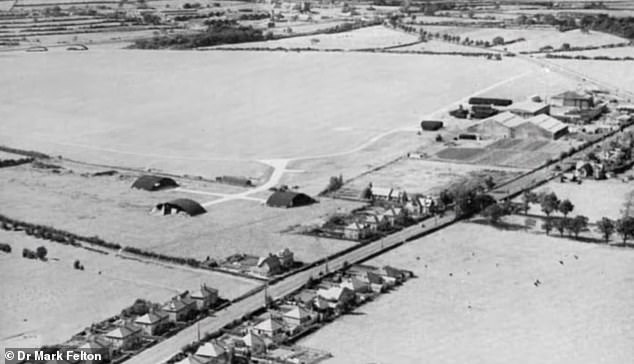 However, when he worked out how to get readings on the level of fuel in the plane’s tanks, he realised they were nearly empty.

The men knew that if they continued, they would have to ditch into the freezing North Sea without life jackets or a dinghy and so would likely die.

Wappler turned the plane around and was able to land in a field in the village of Scratby, five miles from the coastal town of Great Yarmouth.

With their Dutch identities convincing locals, a policeman arrived and was told by the pair that they had become lost while flying to Croydon airport and had run out of fuel.

Accepting their story, the sergeant took them to the police station at Caister-on-Sea and were told the nearest RAF base was 15 miles away, at Horsham St Faith airfield, which is now Norwich International airport.

Wappler spoke on the phone to the duty officer at the base and was told the plane could not be refuelled until the next day. The pair were taken by truck to the base’s officers’ mess, where they both had a bath.

However, a message was given to an administrative officer at the base that a Magister had been stolen from RAF Kingstown by two Luftwaffe officers.

Dr Felton said: ‘He and the station commander armed themselves with service revolvers and marched into the Germans’ room, placing them under arrest.

‘The British admired the Germans’ pluck and gave them a send-off dinner in the officers’ mess.

‘The station commander then handed them over to RAF police, with the parting words, “I’m sorry Gentlemen, you deserve better luck”.

After being imprisoned once again, the pair received 28 days in solitary confinement and in Spring 1942 they were both sent to camps in Canada with many other German prisoners of war.

Both of the men survived the war. Although it is not clear what course Schnabel’s life took once hostilities were over, it is known that Wappler died in 1985 at the age of 76.