As eight fans are killed in a stampede at Travis Scott’s festival, PÁDRAIG COLLINS recalls how being in a concert crush where two people died and dozens were injured was one of the most frightening experiences of his life

August 20, 1988, is a day I’ll never forget, but this weekend’s stampede at a Travis Scott concert jolts it back into the front of my mind.

On that day, I was in a crush at a Guns N’ Roses concert where two people were killed and 34 more were injured.

The disaster at the Astroworld Festival in Texas on Saturday, where at least eight people died and hundreds were injured, has brought my experience back again.

The names of the dead and injured at Astroworld are not yet known, but we do know the names of the two young men who died at the Monsters of Rock Festival in Castle Donington in Leicestershire, England – Alan Dick, 18, and Landon Siggers, 20. 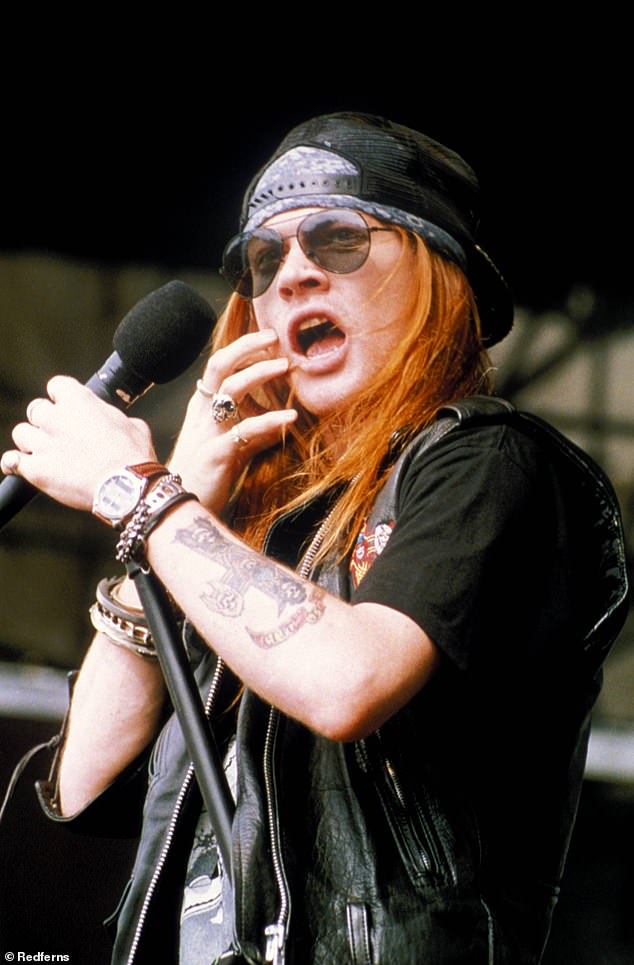 Axl Rose of Guns N’ Roses performing live onstage at Monsters Of Rock 1988 in Castle Donington. Two people were killed in a crush during their set 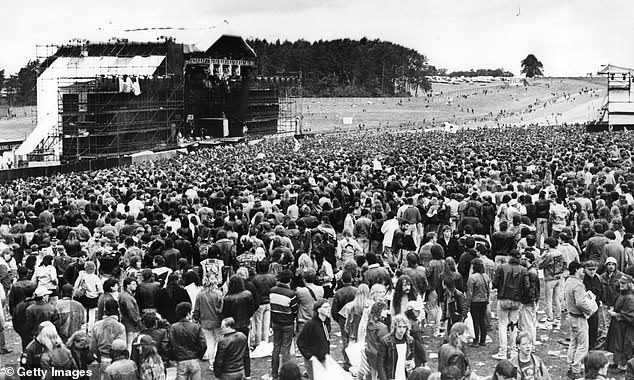 A crowd scene from Donington Rock Festival in August 1988, where two people were killed in a crush

It was one of the first outdoor concerts I went to, and I was excited.

I got an overnight bus and ferry from southwestern Ireland to London, and then another bus to Castle Donington – the festival was held at a motor racing track that had a natural slope.

The bus was stuck in traffic for hours, with just one tape provided by a fellow traveller playing over the sound system over and over.

By the time we got to the site, the early acts were already over. But that was OK, at least I would see the main acts – Guns N’ Roses (who were on mid-afternoon as they were still on their way up), Kiss, David Lee Roth, and the headliners, Iron Maiden.

It was a heavy metal/hard rock festival – by far my favourite music at the time.

My naive expectation of a hippies at Woodstock-type vibe was quickly shot down. Some people in the crowd behaved disgustingly.

One group at the back was urinating in plastic bottles and then throwing it into the crowd, without the cap on. Sometimes their friends encouraged them to aim it at specific people. They laughed at how hilarious they were. 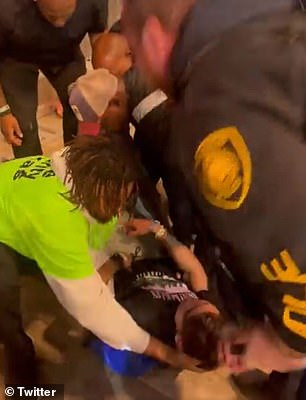 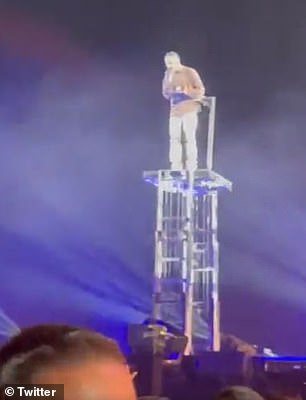 Left: A graphic video showed an unconscious young man surrounded by Houston police officers as they guided him onto the ground in the middle of the crowd. Right: They rolled the man onto his side while shining lights into his eyes and Scott was seen in the background as he continued to perform from a platform feet above the crowd

Taking a circuitous route, I moved as far in front of them as I could – out of bottle throwing range.

By the time Guns N’ Roses came on I was about 25 rows from the barrier before the stage.

It was beginning to get a bit tight, but I’m a big fella and was OK. Then Guns N’ Roses singer Axl Rose could see it was getting a bit out of hand.

‘Don’t f**king kill each other,’ he said at one point.

I tried to get out, but couldn’t. I was hemmed in on all sides. I couldn’t move.

Suddenly there was a massive surge back. I was carried about 10m in seconds. My feet didn’t touch the ground.

Then there was another, equally fast surge forward, though not as far. I feared for my life, but the awful fact was there was nothing I could do about it but try my best to remain upright.

The concert stopped, but just briefly. The crowd parted to let an ambulance in. It looked bad.

Steven Adler, the then-Guns N’ Roses drummer, recalled more than two decades later in his biography, My Appetite For Destruction, that the Donington show still haunted him ‘like a waking nightmare’. 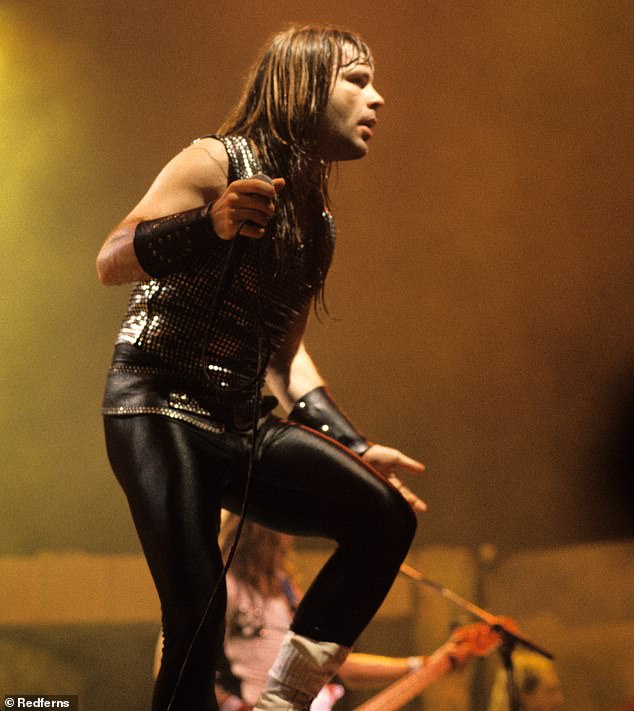 Bruce Dickinson of headliners Iron Maiden appealed for calm during the band’s set at Castle Donington in 1988. Two young men had already been killed during the Guns N’ Roses set earlier that day 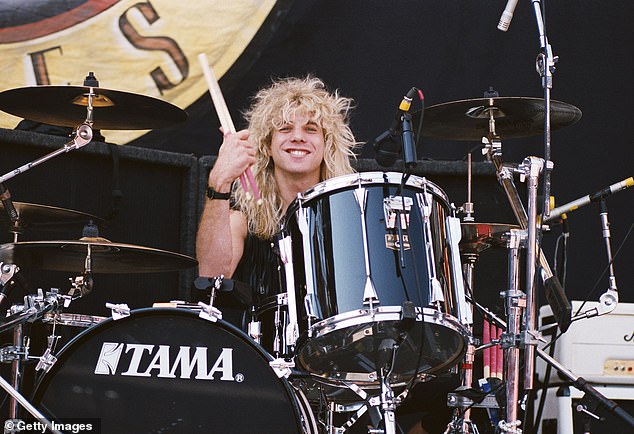 He said there were ‘hundreds of these plastic bottles of urine soaring over the crowd. People were getting hit in the head and splattered with pee’.

He added: ‘Everyone was so out of control that we had to stop the show several times because people kept rushing the stage. Axl asked the crowd to settle down and back up.’

As the crowd surged, dozens of fans were trampled. Security officers battled through the crowd to reach what they later described as a pile of bodies.

Thinking the situation had been resolved, Guns N’ Roses launched into another song, and then tragedy struck. Two young men died as they were crushed into the mud and another was knocked unconscious.

‘People were getting crushed at the front of the stage,’ Adler recalled.

‘But it wasn’t until the next day, after we flew Concorde back to the US, that we were told two kids were killed during our set.

‘They were trampled to death. I was shell-shocked. Numb. I couldn’t believe it.’

I was not injured but had a bad headache. I went into the St John’s Ambulance tent to see if I could get some painkillers.

I felt like a whinger when I saw all the people in the tent with broken legs and other serious injuries, but I didn’t know quite how bad it had been. 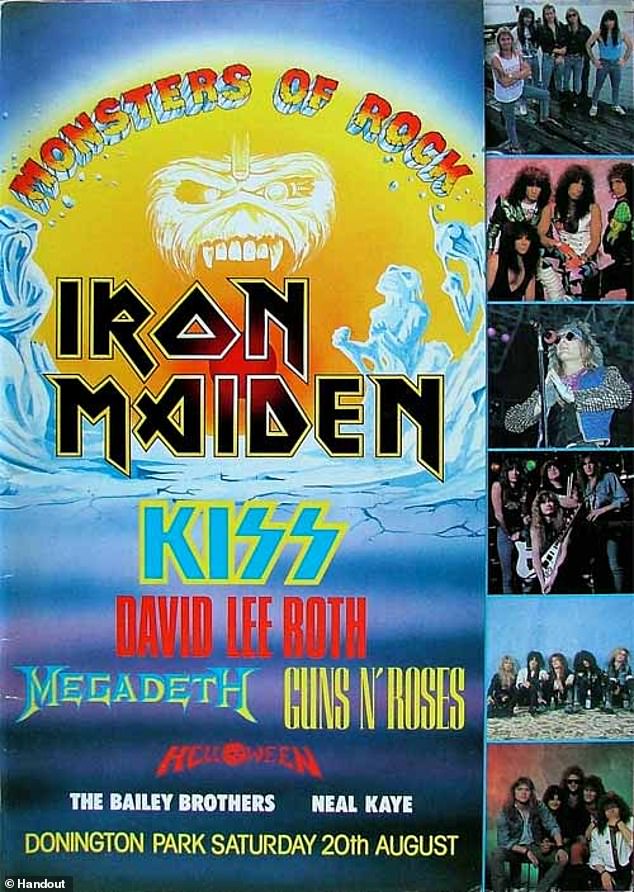 The line up at the Castle Donington Monsters of Rock show in 1988, where two young men were killed in a crush

I went back to the show. During the headline act, Iron Maiden, the singer, Bruce Dickinson, kept asking people to calm down and take two steps back.

It was a great show, but I’ve often wondered if he was already aware that two people were dead.

How I found out was that I couldn’t find my bus back to London. There were several hundred coaches waiting to take people to various places. There were 107,000 people at the concert, with only one stage.

Despairing at the prospect of being left there, I asked the driver of another bus from the same company if he would take me to London.

He said: ‘Two kids died. They might have been on this bus. Hop in.’

It was a terrible way to find out what happened. I decided there and then I done with heavy metal. I have never experienced a finality so certain before or since.

That they were around the same age as me has always struck me. I was in that crush. It might have been me. But it was them.

I’m now middle aged and still have a fear of huge crowds. But they are forever 18 and 20.

RIP Alan Dick and Landon Siggers, and the victims of the Astroworld Festival.