Zimmer of hope for the world: How WWII hero Captain Tom, 99, become a beacon of light in the planet’s darkest days with 10 daily laps around his garden to raise more than £13million for the NHS

It has been a rare piece of good news in a world full of fear at the coronavirus pandemic which has claimed more than 130,000 lives globally.

And people from 53 different countries have now donated £13million to Captain Tom Moore’s fundraiser for the NHS as he achieved his goal of 100 laps of his garden.

The Second World War veteran completed his target of laps at his home in Marston Moretaine, Bedfordshire, today – a fornight before his 100th birthday on April 30. 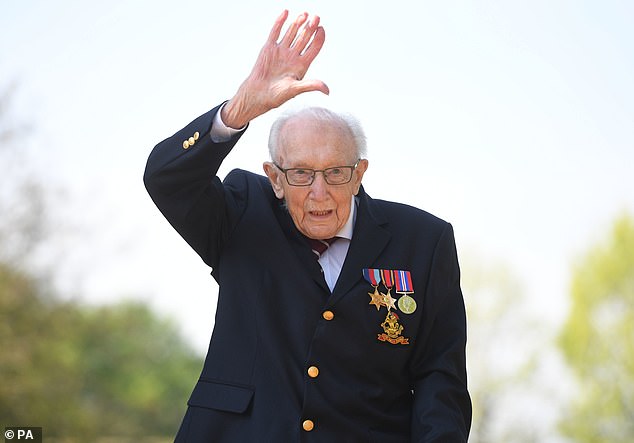 War veteran Captain Tom Moore at his home in Marston Moretaine, Bedfordshire, today after he achieved his goal of 100 laps of his garden – raising more than £13million for the NHS 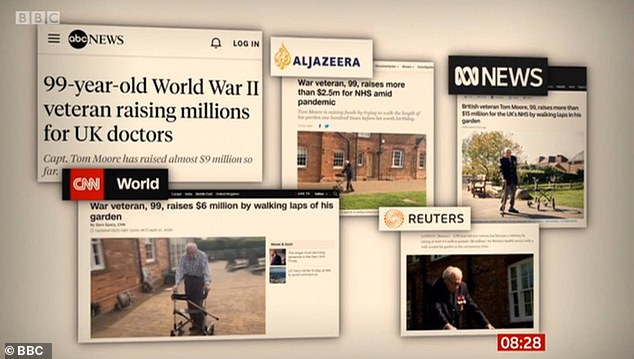 Captain Moore’s story has been picked up by newspapers and TV networks around the world in recent days, from The Times of Israel to The Phuket News in Thailand.

Other news outlets providing coverage have included The Jakarta Post in Indonesia, France 24, Al Jazeera in Qatar and the Australian Broadcasting Corporation.

Captain Moore has raised more than £12million so far on his JustGiving page, despite having an initial target of £1,000 when he began fundraising just over a week ago.

The fundraising campaign was launched last Thursday, and soon hit its initial target within the first 24 hours. By Saturday, he reached a second target of £100,000. 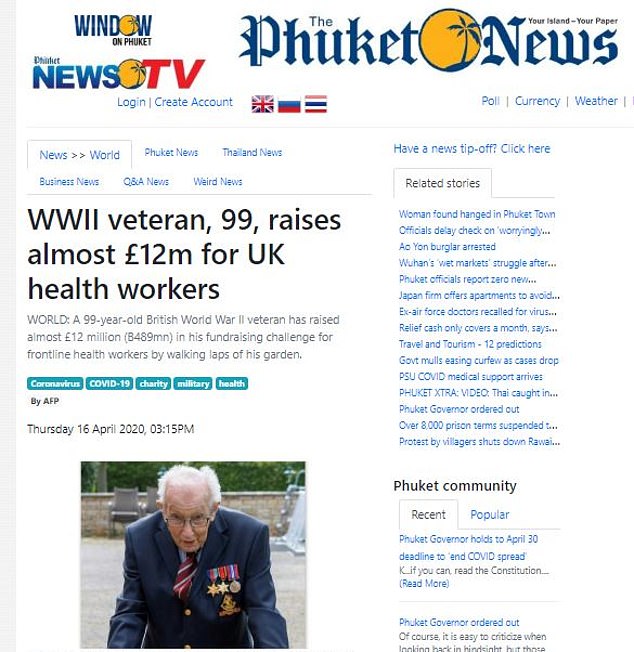 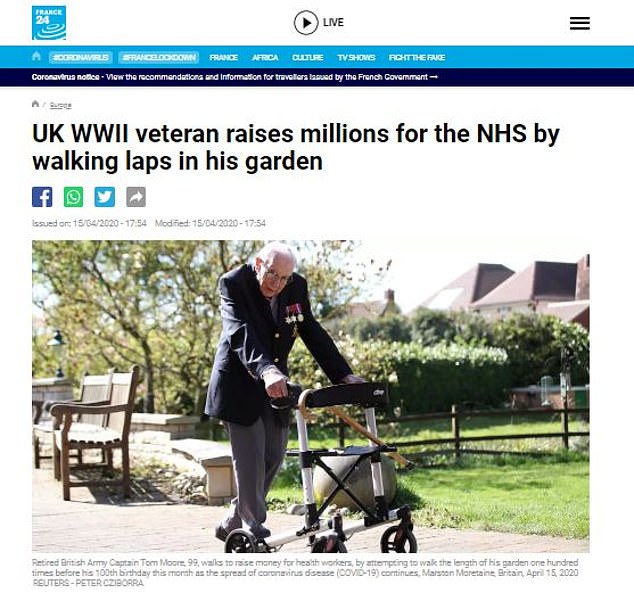 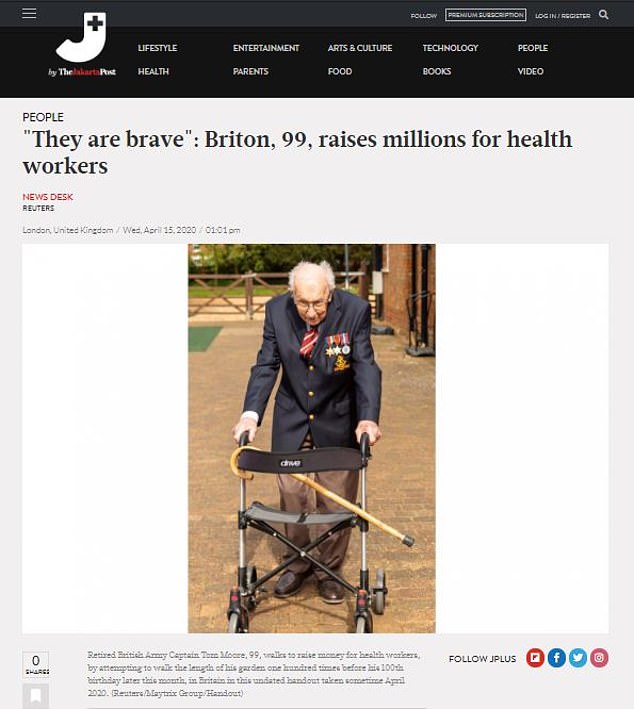 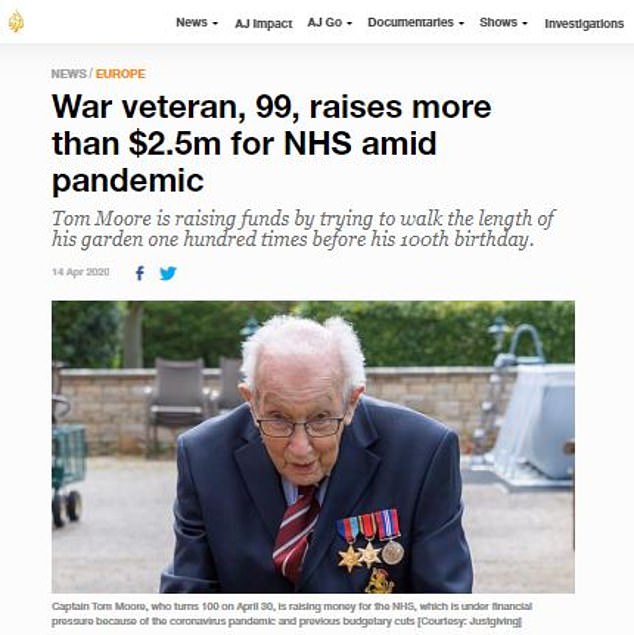 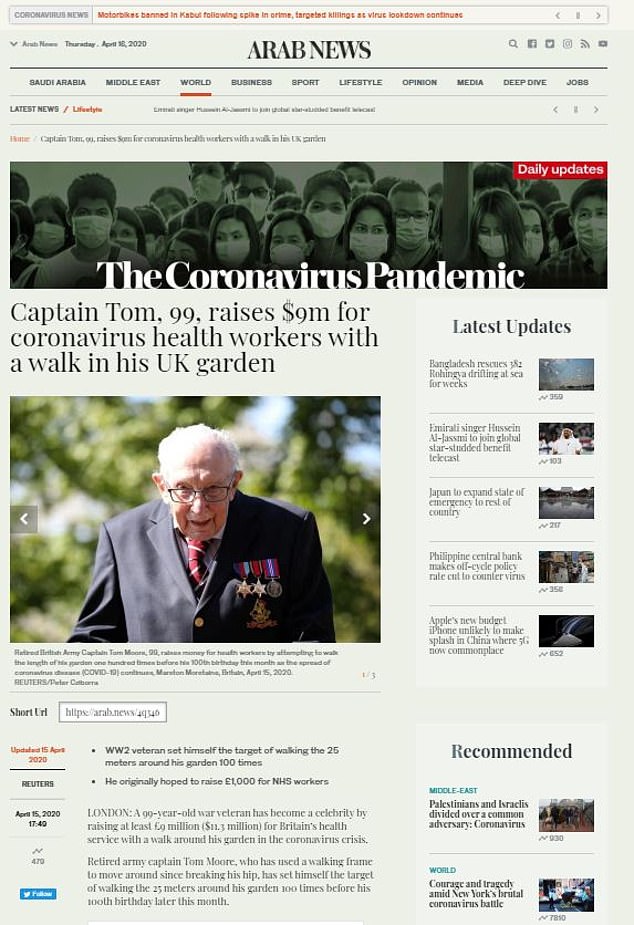 But the campaign then really gained momentum after he appeared on BBC Radio 2 and spoke to the singer Michael Ball, getting the funds to £250,000 by Sunday.

Tuesday saw the £1million level hit, before Captain Moore got to £5million yesterday morning. By late afternoon it was at £8million – and the figure got to £10million at 11pm last night.

Asked about the rapid rise in donations, Captain Moore told the Daily Mail: ‘Suddenly we were on £50,000. Then £100,000. Now the figures are just unbelievable.

‘Three, four, five million. I turn my back for a few minutes, and it’s shot up again. It’s astonishing money. The sort of money you just can’t visualise.

‘The response has been miraculous. It’s been a bit of a surprise and I am so grateful that everyone seems to want to support it.’

Among those praising his efforts from abroad in a compilation video shown on BBC Breakfast today was former New York judge Judy Sheindlin, better known as TV personality Judge Judy.

She said: ‘Captain Moore, we are truly impressed on this side of the pond. I think you are remarkable, I think what you have done is an inspiration, so congratulations.’

Captain Moore completed the final four of the laps at his home this morning, with a special guard of honour by the 1st battalion of the Yorkshire Regiment.

Speaking at the finish line, he said he felt ‘fine’ and that he was ‘surrounded by the right sort of people’.

Of the coronavirus pandemic, he told BBC Breakfast: ‘We will get through it in the end but it might take time, but at the end of the day we shall all be okay again.’ 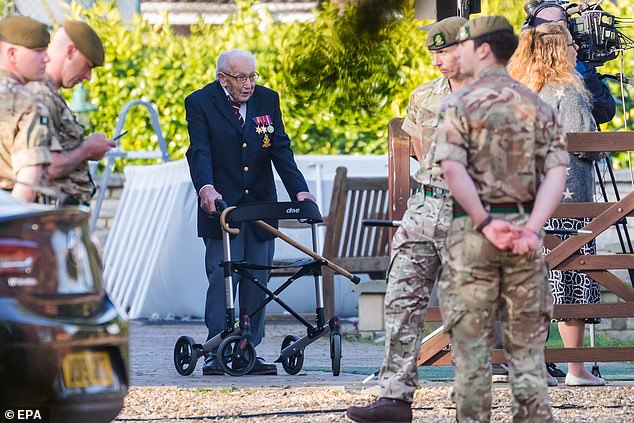 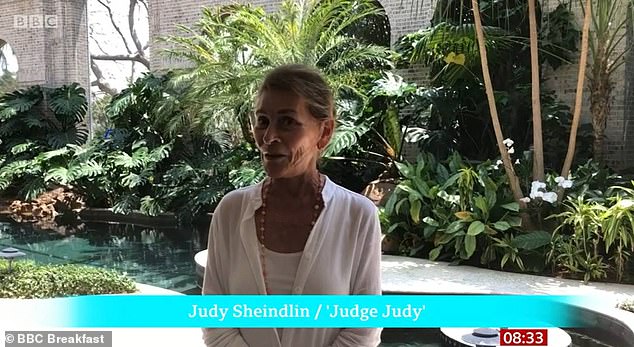 He said plans for his party have been affected by the virus, and he joked everyone would have to keep six metres away from him ‘because I must be something horrid’. 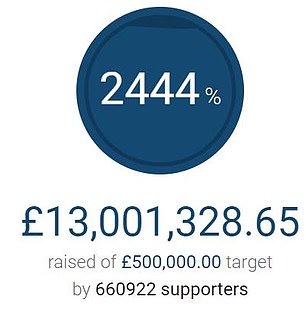 He added that the national outpouring of love and support for him was ‘a party enough for me’.

Captain Moore was given a special mention in a press briefing yesterday by Health Secretary Matt Hancock, who described him as an ‘inspiration’.

After being told he had become the largest single fundraiser for the JustGiving donation site, Captain Moore said he would continue with his fundraising.

There have been multiple calls for him to receive a knighthood for his charitable actions, and there is an online campaign for children to make him birthday cards.

His daughter, Hannah Ingram-Moore, told the BBC that the amount raised was ‘beyond our wildest expectations’.