Victoria’s hotel quarantine program was $24.3 million over budget by mid-June, with senior government officials attributing much of the blowout to the decision to use private security instead of Australian Defence Force personnel.

Internal government emails tendered in evidence at the board of inquiry into hotel quarantine show the Victorian government’s contentious decision to use security guards rather than defence force personnel at COVID-19 quarantine hotels cost taxpayers millions of dollars and delivered windfall profits to the owners of security companies. 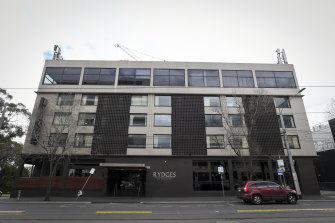 “Both Queensland and NSW have enlisted the help of the ADF, which would have significantly decreased expenditure on security,” a Department of Jobs, Precincts and Regions official wrote in an email to colleagues. The official’s name has been redacted.

The emails show Victoria’s spending on quarantine was forecast to reach $130 million by the end of June compared to NSW's $50 million and Queensland’s $19 million. However, the DJPR's own breakdown of spending said it did not know what was included in the Queensland and NSW figures, and whether they took into account that the Commonwealth was splitting costs approximately 50-50 with the states.

NSW and Queensland also used private security contractors, but they were supplemented by police and ADF personnel.

A breakdown of the cost of security shows the Victorian government’s main private contractor, Unified Security, had received $28.6 million for its services across 13 Melbourne hotels that were used for quarantine. The two other contractors used by the government, MSS and Wilson, received $6.7 million and $4.4 million respectively.

With the security companies relying on guards provided through sub-contractors who in some cases were allegedly paid as little as $18 per hour, the figures provided in the DJPR cost summary suggest a significant profit for the owners of the main security providers, particularly Unified.

Speaking to female hotel staff in ways that are overly friendly and ‘hitting on’ them … one of the supervisors has been involved in this.

Under the cost-sharing arrangement with the Commonwealth for hotel quarantine, Victoria’s share of the $24.3 million blowout was $11.3 million, emails show, suggesting also that an unexpected increase in the number of repatriation flights to Melbourne was the reason for the extra spending. In early August, NSW had 165 ADF personnel assisting hotel quarantine. Queensland had 196. Victoria had suspended the bulk of its program to help it deal with the COVID-19 outbreak.

The Andrews government’s decision not to seek the support of the ADF to provide security at quarantine hotels has been a source of major tension with the federal government. Premier Daniel Andrews has repeatedly said ADF support was not offered to Victoria, only to be countered by Defence Minister Linda Reynolds who said the option of using defence personnel was regularly put to Victorian authorities.

The second wave of COVID-19 that has killed hundreds of elderly Victorians and locked down millions of Melburnians for weeks sprung from two quarantine hotels, Rydges on Swanston and the Stamford Plaza, in May and June. 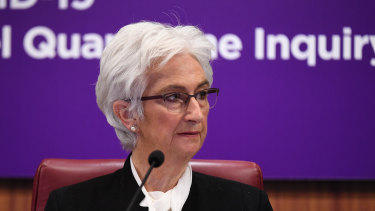 Victoria’s Department of Health and Human Services was responsible for overseeing infection control at both hotels. Unified Security was on duty at Rydges, while MSS was at the Stamford Plaza.
The hotel quarantine programs in Sydney and Brisbane which featured a significant ADF and state police presence have encountered far fewer infection control problems than Melbourne.

Despite days of testimony from senior Victorian public servants involved in hotel quarantine, the board of inquiry headed by former judge Jennifer Coate has yet to be able to pinpoint who in government ranks made the decision to use private security instead of ADF or police.

The first complaints, including from Ms Serbest herself in her key role setting up the quarantine program, were about guards working for Wilson at the Crowne Plaza and Pan Pacific hotels in April. In one case, a guard was caught out asking a female guest to join him on Snapchat. These issues led to DJPR replacing Wilson guards with Unified guards at two hotels, which caused problems for officials because Wilson was on the government’s approved panel of security providers while Unified was not.

In mid-May, further problems were raised about the performance of guards subcontracted by Unified at Rydges on Swanston. These included a report that some had been making inappropriate comments to Health Department nurses and leering at women.

“Repeated comments such as, ‘Eat your [sic] skinny’. Intimidating body language and ‘leering’ comments towards nurses. Speaking to female hotel staff in ways that are overly friendly and ‘hitting on’ them … one of the supervisors has been involved in this,” a DHHS official reported.

Emails show Unified’s Victorian manager Nigel Coppick promised to take immediate action against the guards and subcontractor responsible by standing them down and replacing them.

When questions were raised within DJPR about the merits of using a security firm not on the government’s approved panel of suppliers and not backed by Trades Hall, senior officials within the department raised Unified’s Aboriginal ownership and previous work in providing jobs for unemployed as being in line with the Victorian government’s social procurement objectives.
Mr Coppick in June reduced Unified’s shifts across hotels by 30 per cent in a bid to ease cost pressures.

The government in July transferred control of hotel quarantine to Corrections Victoria and established the board of inquiry into the program.