Hospital bosses are refusing to name a gynaecologist facing investigation over claims he ‘unnecessary harm’ to nearly 300 patients.

Former colleagues have raised concerns about the consultant, who carried out major surgeries on women including hysterectomies and removing ovaries, between 2015 and 2018.

The complaints were only made after he left his post two years ago – but it’s not known if he continues to practice elsewhere, as Royal Derby Hospital bosses will not name him.

A  review into his practices was only announced by the University Hospitals of Derby and Burton NHS Foundation Trust in April this year, more than a year later.

Originally 193 women who were patients of the obstetrics and gynaecology consultant were contacted, but now a further 79 have been written to as part of the inquiry. 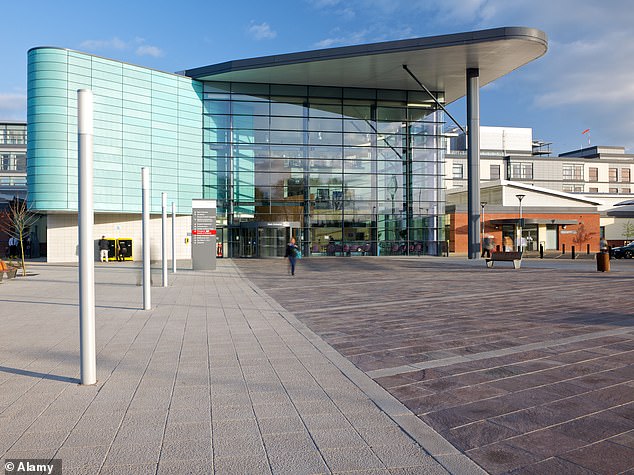 Former colleagues at Royal Derby Hospital raised concerns about the consultant, who carried out major surgeries on women including hysterectomies and removing ovaries, between 2015 and 2018

But lawyers acting for some of the women fear there may be many more out there who have no idea of the ongoing investigation because health chiefs have refused to divulge the doctor’s name.

The shocking announcement that the number of women potentially caused ‘unnecessary harm’ has increased to 272 was revealed this week.

There are accusations he left at least one patient in agony after operating on her.

The latest 79 women were involved in intermediate care, such as a diagnostic test, between April 2017 and June 2018.

An initial review of 57 cases involving the consultant, in April, identified eight lapses of care resulting in ‘unnecessary harm’. The trust has apologised to these women for the care they received.

Repeated attempts through the Freedom of Information Act to get the trust to name the implicated consultant have been rejected by the trust due to ’employee confidentiality’.

Now hospital bosses say they will not confirm the doctor’s identity publicly during the investigation.

In May, the organisation said the review had been delayed due to the Covid-19 pandemic. It is now expected to be published later this year.

But health chiefs have admitted it would not know the total number of patients potentially affected until an external review, overseen by NHS England, is complete.

Dr James Crampton, medical director for quality and safety, said: ‘It is important to widen the review at this time to investigate whether those who underwent intermediate care from this consultant received safe care.

‘We are doing this proactively, rather than in response to any specific concerns, so that the review is as thorough as possible.

‘We will continue to work closely with NHS England to establish the full facts of the care provided by this consultant and will provide all the necessary support they need during their review.’

In a statement, the trust said: ‘The latest 79 women included are part of a review of intermediate care, such as a diagnostic test, that took place between April 2017 and June 2018.

‘Although there are no current concerns about the care these women received, the Trust and NHS England have expanded the review to ascertain whether women who required intermediate care need to be included.

‘Members of the public are asked to continue not to call the hospital switchboard in relation to this issue as all those patients who are potentially affected at this stage have already been contacted directly.

‘However, anyone needing further reassurance should visit the trust website for details of how to get in touch. Once the review is complete the anonymised findings will be published on our website.’

A number of women involved in the investigation have contacted lawyers asking them for assistance.

Karen Reynolds, partner of Freeths’ clinical negligence team, said: ‘I am sorry to hear of the large number of women who have been contacted as part of this investigation, particularly in light of the sensitive nature of the treatment they received.

‘But I am concerned there may well be other women who have not been contacted by the Trust who also may have been affected.

‘We have specific expertise of clinical negligence group actions, where a large number of patients have received a pattern of poor care provided by one particular doctor.

‘We have been recently instructed by a number of women affected and are beginning to see an emerging pattern of the care provided by this consultant.’

The lawyers confirmed the NHS England’s investigation included a review of ‘major operations such as hysterectomy and prolapse repairs and removal of the ovaries that were performed by the consultant’.

Earlier this year, clinical negligence lawyer for Slater and Gordon, Helen Barry, who is representing one of the affected women, said her client had been left ‘in agony’ and with dangerous complications after being operated on by the consultant.

Ms Barry had said: ‘She felt something had gone seriously wrong and now these fears seem to be confirmed.’

She said the number of women contacted also raised ‘serious concerns’ about ‘the level of supervision and oversight at this trust’.