Horrified girl, 13, finds HUMAN SKULL on beach near infamous Deadman’s Island that was a mass burial ground for crooks and pirates 200 years ago

A 13-year-old girl made a horrifying discovery after almost treading on a human skull whilst walking on an Essex beach with her father this weekend.

The skull, which has been confirmed as human remains by Essex Police, was discovered on Sunday afternoon at Irlam’s Beach in Little Oakley, near Harwich.

Forensic teams from Essex Police quickly arrived at the scene and confirmed the skull was human, despite social media claims that the skull was a fake placed on the beach as a prank.

The find was then bagged up and taken away for forensic tests to date the remains.

Locals have speculated that the skull could date back several centuries and may have been a pirate or a thief held on the prison hulks off so-called Deadman’s Island in Kent – just 40 miles down the coast from where the skull was found. 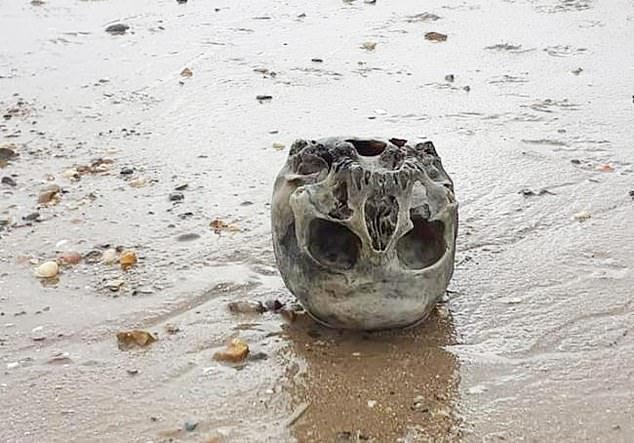 Essex Police confirmed it is a real human skull and it is being forensically dated. The skull pictured on Irlam’s Beach, Little Oakley, near Harwich, Essex

But Mike Bush, Tendring councillor for the Oakleys and Wix, said it would be wrong to jump to conclusions until there has been further analysis.

He said ‘I will reserve judgement until it has been confirmed by forensics but it could well turn out to be an interesting and exciting find.

‘We know around those areas there are often ancient finds because historically there were settlements and encampments along the coastal belt.

‘Hamford Water in Little Oakley goes right back into early times. The inlets go right through to Walton and go back hundreds of years historically. 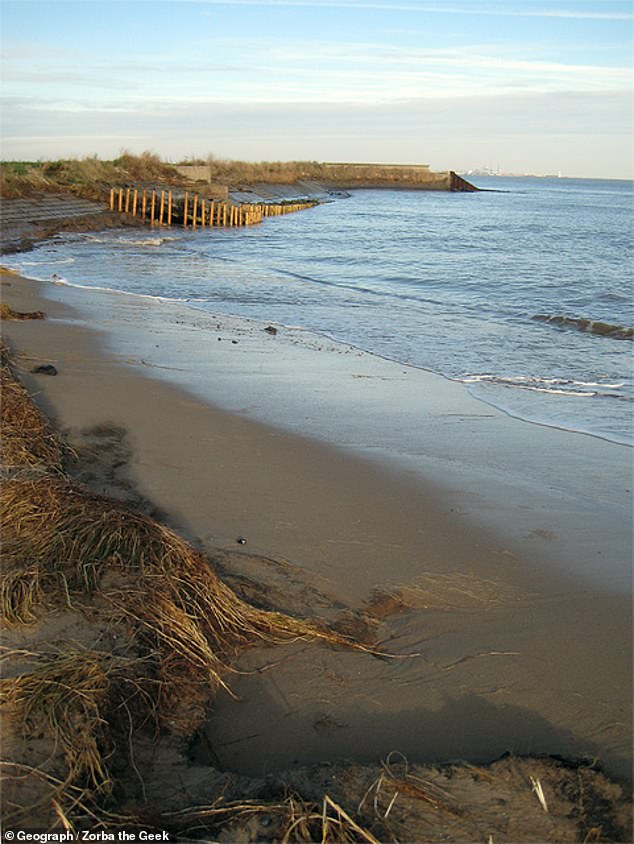 The beach where the skull was found. Irlam’s Beach, Little Oakley, near Harwich, Essex 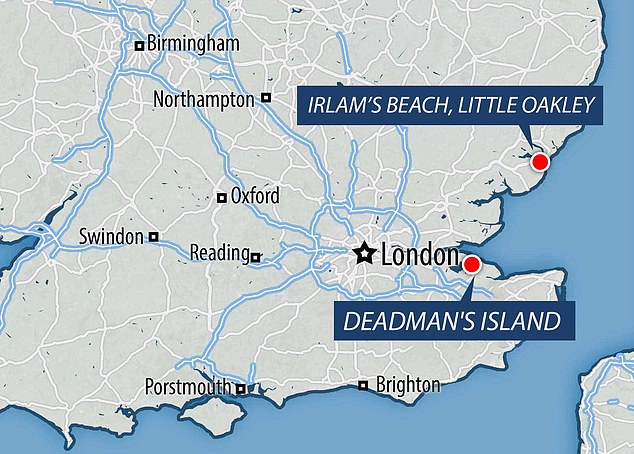 Locals believe the skull may have washed onto Irlam’s Beach in Little Oakley, near Harwich, from Deadman’s Island in Kent

‘It is known there were settlements there and fishing boats from Europe still come to fish there. Seals live there too so it is a really protected area.’

One resident, who asked to remain anonymous, said ‘It was found by a young girl walking with her dad. Both of them were shocked by the find.

‘They called the police and forensics who came and took it away.

‘At this stage, no-one knows if it is ancient or modern.’

Essex Police said ‘A human skull was found by a member of the public while walking along Irlam’s Beach, Little Oakley, around 3.30pm on Sunday. 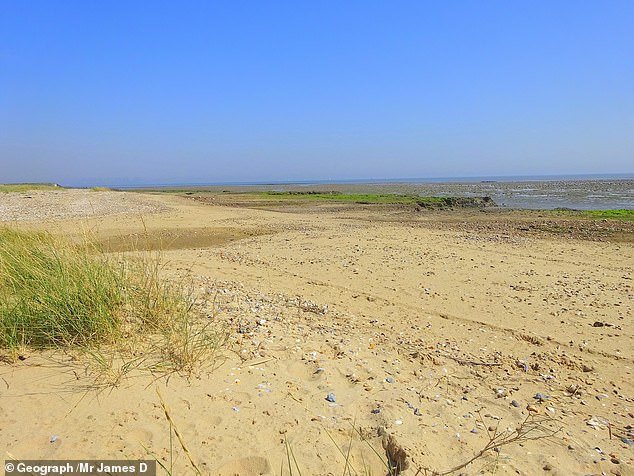 ‘At present, it is not known how old the skull is but we believe it may have been brought in by the tide.

‘Enquiries are ongoing, but this is not being treated as suspicious.’

Irlam’s Beach is about midway between Harwich and Walton-on-the-Naze.

Suffolk Constabulary said detectives are not linking the discovery of the skull with an investigation into bones found in the river at Sudbury last August.

Human bones including skulls, teeth and vertebrae, litter the shoreline on grisly Deadman’s Island off the coast of Sheppey, Kent.

The uninhabited mudbank, which lies just 40 minutes from central London, was used as a mass burial ground for criminals who died on board prison ships, like those referenced in Charles Dicken’s novel Great Expectations, in the 1800s.

It is not known how many men and boys were laid to rest on the remote strip, which is now protected by Natural England.

They would have been buried six feet under the grassed over mudbank. 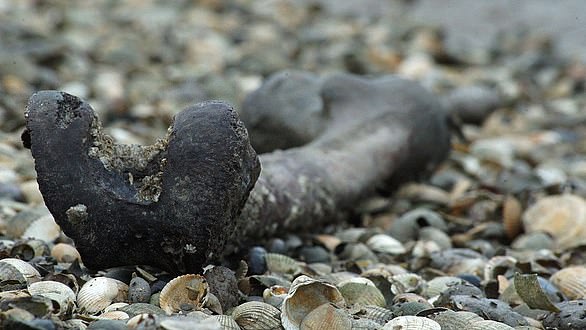 Dozens of bodies have been uncovered by the elements at mysterious Deadman’s Island off the coast of Sheppey, Kent

But over the last few years coastal erosion has begun to spill its mysterious secrets, as dozens of coffins and bodies have been uncovered by waters.

Locals in the Sheppey town of Queenborough grew up with the legend of a red-eyed hound who ate the heads of its victims on the eerie land mass.

But historians have shown it was used a cemetery for inmates onboard prison hulks – converted warships used as floating jails for criminals waiting to be transported to the colonies in the 1820s and 30s.

Experts say more than 1,000 men and boys were incarcerated in floating fortresses ‘Retribution’ and ‘Bellerophon’ anchored at Sheerness, made of decommissioned Ships of the Line stripped of their masts and sails.

Naval historian Professor Eric Grove said: ‘Obviously when people died on board these prison hulks they had to be buried somewhere and island close-by was the obvious place.’ 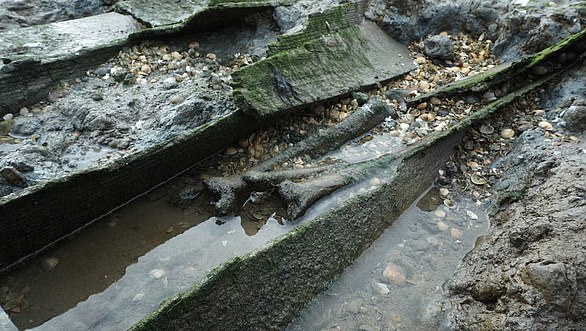 Human bones seen on the shore of Deadman’s Island off the coast of Sheppey, Kent

There has been debate about how bad the conditions were on board, but it is believed a cholera outbreak on Retribution on the 1830s may help explain the dozens of bodies now littering the island.

‘There were a lot of men in close quarters, and if an epidemic began it spread quickly,’ added Professor Groves.

The lonely island is out of bounds to visitors and a designated site of special scientific interest thanks rare birds which make their nests there.

But those with special permission are able to row to ‘Coffin Bay’ where they are greeted with remains of the prisoners who met their end on board the hulks.

At its peak Retribution housed 600 men and boys – all victims of the ‘draconian penal laws of the period’ – which would see boys as young as ten sentenced to years of transportation for picking pockets.

Also moored was decorated warship Bellerophon, who was converted to a hulk for £12,000 and in 1817, having fought in the Battle of Trafalgar and the Battle of Nile alongside HMS Victory and Admiral Nelson.