Hong Kong: Outspoken Hong Kong pro-democracy advocate and media tycoon Jimmy Lai was refused bail on Thursday on a fraud charge amid a growing crackdown on dissent in the semi-autonomous city.

Jimmy Lai of Next Digital, which publishes the Apple Daily newspaper, was among 10 people arrested on August 10 on what police said was suspicion of violating a national security law and collusion with a foreign country. 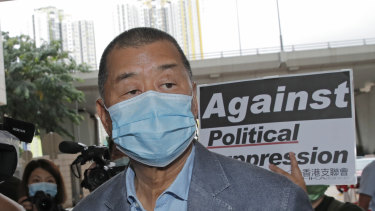 Jimmy Lai arrives at a court in Hong Kong in September.Credit:AP

Lai, 73, was later released on bail but police raided his company’s offices in October and took away documents.

On Wednesday, Lai and two Next Digital executives were charged with fraud over accusations that they violated lease terms for Next Digital office space. On Thursday he was denied bail and his case adjourned till April 16.

The move comes a day after a court sentenced prominent democracy activist Joshua Wong to more than 13 months in prison over an unlawful anti-government rally in 2019, the toughest sentence for an opposition figure this year. 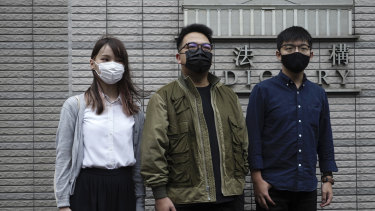 They also jailed Wong's colleagues Agnes Chow and Ivan Lam for 10 and seven months, respectively. Chow speaks fluent Japanese and is well-known in Japan, prompting the Japanese government to speak out against the sentencing.

"Japan increasingly has grave concerns about the recent Hong Kong situation such as sentences against three including Agnes Chow," chief government spokesman Katsunobu told a regular news conference on Thursday.

"We have conveyed our concerns to China about Hong Kong at various opportunities," he said.

Beijing imposed the national security law in response to protests in Hong Kong that began in June 2019 over a proposed extradition law and expanded to include demands for greater democracy. More protests and arrests ensued.

Apple Daily criticised the law on its front page on July 1, calling it the “final nail in the coffin” of the territory’s autonomy.

The crackdown has prompted accusations Beijing is violating the autonomy it promised when the former British colony was returned to China in 1997. It also has triggered warnings the ruling Communist Party is damaging Hong Kong’s appeal as a global business centre and one of Asia’s most dynamic cities.

Hong Kong’s last British governor, Chris Patten criticised the activist's sentencing, saying in a statement that it was “another grim example of China’s determination to put Hong Kong in handcuffs”.

"All these judicial prosecutions amount to persecution of our young," The New York Times quoted her as saying. "They're using Joshua Wong as an iconic figure in particular to issue this chilling message."