The state government has bowed to pressure and rolled out N95 masks to more hotel quarantine workers in an effort to close dangerous gaps in infection control.

An additional three cases linked to the Holiday Inn quarantine hotel near Melbourne Airport were announced on Thursday, taking the cluster to 11 people and intensifying calls from health experts to beef up protections for quarantine workers. 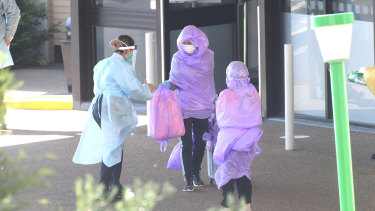 The Holiday Inn at Melbourne Airport was evacuated and closed for cleaning on Wednesday.Credit:Joe Armao

Dr Veness said “spotters” should also be rolled out in hotel quarantine to ensure that PPE was being worn correctly.

“They can check what you’re doing when you’re putting your PPE on and off to ensure you’re doing it correctly and not accidentally infecting yourself in the process.”

He said authorities had a moral and legal obligation to keep hotel guests and workers safe and could no longer pretend that aerosol transmission was not a foreseeable risk.

“Ventilation is now being spoken about because there have been so many events of transmission and acquisition in those environments.”

Mr Weimar said a fourth worker at the Holiday Inn had returned a positive result on Thursday afternoon.

“We are still trying to get a sense of how far transmission has already occurred and we need to be sure we keep running faster than the virus to ensure we run it to ground,” he said.

The female assistant manager was tested on Wednesday and had been isolating as a close contact of a fellow Holiday Inn worker.

It follows the male partners of two food and beverage workers testing positive earlier on Thursday after being placed into isolation as primary household close contacts.

Questions remain over nebuliser use

Initial investigations suggest a nebuliser – a device that vaporises liquid into fine mist and is commonly used by asthmatics – was behind the spread of the virus.

The aerosol-based medical device was banned for use outside of negative pressure rooms in Victorian hospitals last year after it was believed to have helped fuel transmission in a serious COVID-19 outbreak at a Melbourne hospital.

Victoria’s peak medical group renewed calls for the state government to release the audit they undertook of the ventilation system in the Holiday Inn before it began using it for housing high-risk returned travellers.

Professor Rait said on Thursday serious questions remained about how a nebuliser was able to get inside hotel quarantine in the first place, despite the government insisting such medical devices were banned from use.

“We need to make sure that doesn’t ever happen again because it’s a super spreader type device,” he said.

Hotels ‘can be brought up to standard’

Professor Rait said the state’s two “hot” hotels – the Novotel South Wharf and the Holiday Inn Flinders Lane – had shown it was possible hotels could be brought up to standard.

“If we were prudent we would be thinking, well, with more of these infectious strains around, maybe even those places might not be up to it so we need to be thinking about more remote locations with more open air,” he said.

Though the British variant is more virulent, Mr Weimar said it helped health authorities that all had the same strain and had transmitted it among themselves.

“We’re alert but not alarmed,” Mr Weimar said. “We’re right on top of this one.”