For casual workers hammered by yet another lockdown, the feeling as Prime Minister Scott Morrison faced the media on Thursday afternoon was palpable relief, along with some nagging questions. Why was this federal aid coming so late and would they botch the delivery?

“There’s no doubt there’s going to be some kind of crash on Tuesday with everyone trying to access [the website to apply for funds],” said Sam de Groot, who is among Victoria’s estimated 500,000 casual employees waiting for relief as the government unrolls its assistance package next week. 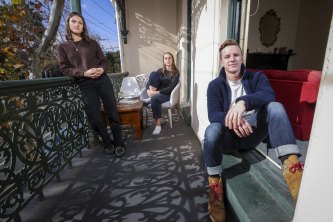 In his North Melbourne share house, three of the four tenants have had no work since lockdown began. Mr De Groot, a student at Melbourne University, normally works at least 15 hours a week at a Carlton bar.

“I have a bit of savings and I’ve been eating into that,” he said.

“I want to be self-sufficient and I’m lucky enough to have saved a bit to help me through this kind of time but I know plenty of people that are not in the same situation. They have more expenses, they have other commitments or people relying on them.”

Mr De Groot will be eligible for the $325 payment announced by the Prime Minister for employees who would normally be working 20 hours a week or less. Workers employed for more than 20 hours will get $500 in the scheme, which will be administered by Services Australia. 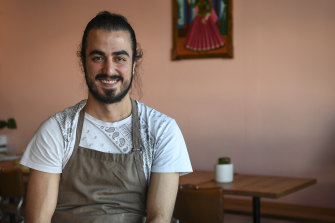 “I’ve cut most of the shifts”: Hamed Allahyari chef and owner of Cafe Sunshine and Salama Tea in Sunshine.Credit:Penny Stephens

“They should have acted much faster,” said Mr De Groot, a commerce student at Melbourne University.

“It’s probably going to crash the site. And if you come from a background where you can’t access the internet easily, you’re going to have more difficulties getting the payment ASAP. I don’t need it immediately but I’m putting myself in more financial stress now and just hoping that backup comes.

“I’m kind of dependent on it. It’s not the same as what I’d be making working right now but it at least covers the basics so I’m not eating into my savings or worrying about my finances too much.”

Victoria’s latest post-JobKeeper lockdown has highlighted how such restrictions disproportionately affect the growing casual workforce as incomes are obliterated overnight without warning.

Freya Parker, 22, who is employed as a casual bar manager at a venue in St Kilda, said the continuing uncertainty of the COVID-19 era had her and others wondering if the freedom of casual work was worth the stress when lockdowns seemed ever looming.

“After [previous] lockdowns there have been multiple venues saying ‘We’re hiring’ but generally hospitality is finding it very hard to find staff,” she said. “People start to question the security of their job and if they’re going to get paid soon and if they can afford another snap lockdown.

“I’m definitely worried. I do like job security and sometimes I think maybe it’s worth going back to uni and getting another degree and another skill to fall back on.”

Kevin Formosa, 27, a dance instructor, had to cancel all classes. He believes the federal government should have acted more quickly.

“In a way, this lockdown has been tougher because it just came out of nowhere and we had no income whereas last year we were able to get JobKeeper on day one,” he said.

”It seems [the assistance is] coming in a bit late. Some of us have been out of work for almost two weeks now. I was hoping they’d come up with something a little bit sooner than what they have. I live pay cheque to pay cheque so it’s not easy when you’re used to having that income to get by day to day.“

For hospitality employers, it is equally difficult watching their casual workforce bearing the brunt of lockdown.

Hamed Allahyari, who runs Cafe Sunshine and Salama Tea in Sunshine, said he had seven casual staff and had only been able to find shifts for two of them as his business turned to takeaways only.

Mr Allahyari, an asylum seeker from Iraq, employs other refugees in the business he started in 2016.

“I can’t pay everyone so I have cut most of the shifts,” he said.

“It is very difficult for them now. They have their own rent to pay, bills to pay, their own expenses but unfortunately I can’t give them jobs. Most of them, are sitting at home without other work. I try to give all of them enough shifts for a week but it’s not enough for them.”

At the other end of the scale from Cafe Sunshine, Crown Melbourne paid staff their rostered hours and salaries during the first week of lockdown. In the second week, the company said it was suspending most of its 11,500 staff and making a “one-off discretionary payment”.