Health bureaucrats stopped Victorian Chief Health Officer Brett Sutton taking control of the state’s coronavirus response against his wishes and in contradiction to the state’s own pandemic plan.

The revelation came during Victoria's hotel quarantine inquiry on Thursday, as senior health bureaucrats warned that the Andrews government's failure to consult Professor Sutton on critical decisions about infection control had undermined the government's pandemic response.

The inquiry heard that Health Department deputy secretary Melissa Skilbeck advised her department secretary that Professor Sutton would be too busy in his lead advisory role and as the public face of the pandemic response to also serve as state controller. 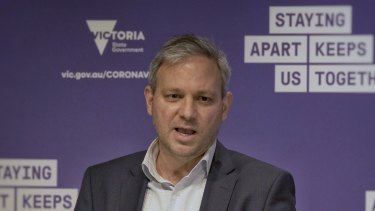 Professor Sutton didn't agree with the decision, the inquiry was told.

"Would it be fair to say that he was against that decision?" counsel assisting the inquiry Ben Ihle asked Ms Skilbeck.

"Yes, he was," Ms Skilbeck replied.

The Age has previously revealed that under Victoria's plan for an influenza pandemic, the chief health officer should assume the role of state controller and "overall responsibility for emergency response operations".

Ms Skilbeck, in a statement tendered to the inquiry, said the state controller position was "twinned" by department emergency management officials Andrea Spiteri and Jason Helps.

Ms Skilbeck said this reflected the cross-departmental planning required, the size and complexity of the response to the pandemic and "the significant demands on the time of the CHO" to communicate with the public.

Professor Sutton did not respond to attempts to contact him on Thursday night. A DHHS spokesperson said Victoria's response to the pandemic was being led by Professor Sutton.

"The Chief Health Officer has extensive responsibilities for providing public health advice to inform critical decisions of the Victorian government and holds a number of important statutory functions, including the making of directions, in consultation with the Deputy Chief Health Officer," the statement said.

Senior health officials told the inquiry that the sidelining of Professor Sutton on crucial matters such as hotel quarantine and Melbourne's curfew had hampered its handling of the pandemic.

Dr Finn Romanes, a senior medical adviser appointed to the position of Public Health Commander, said in his tendered statement that if Mr Sutton had been made state controller, "public health expertise may have been more embedded in the governance of the hotel quarantine program".

Professor John Mathews, a former national deputy chief medical officer, told The Age that Professor Sutton's advice had not been sufficiently sought by government throughout the pandemic.

“One of the reasons Victoria has found itself in trouble is because the chief health officer’s advice wasn’t sought when they were making key decisions like about hotel quarantine in Victoria,” Professor Mathews said. “Unfortunately, the lowest common denominator prevailed.”

Professor Mathews, who co-wrote a report warning the Commonwealth of the impending threat of a pandemic while he was deputy chief medical officer in 2004, suspects Professor Sutton's advice may not have been taken seriously enough at the start of the pandemic.

“Before this emergency happened, the chief health officer in Victoria was not at senior enough level to really have the ear of the premier,” the respected epidemiologist said. “He’s obviously got the ear of the Premier now, but only because everyone has realised the magnitude of the problem.”

Another former senior Victorian health official with knowledge of the state's emergency response systems, who commented on the condition of anonymity, also queried why the Andrews government had failed to put Professor Sutton in charge.

'If Victoria’s own chief health officer isn’t involved in hotel quarantine and he's not involved in the curfew, then who is?'

Criticism of the sidelining of the Chief Health Officer comes amid a furore over the imposition of a night-time stay-at-home direction on Melburnians.

Professor Sutton confirmed the curfew was not a consequence of his public health advice. The Premier said the decision was made to make enforcement easier, but Police Commissioner Shane Patton said police had not requested the measure either.

Professor Sutton also confirmed it was not his decision to put security guards in charge of Melbourne's high-risk quarantine hotels, which led to outbreaks at the Stamford Plaza and the Rydges.

The inquiry was also told on Thursday that before June 23, on a date that wasn't stipulated in the hearing, that Australia's Chief Medical Officer, Brendan Murphy, offered the use of defence personnel in lieu of private security to Mr Sutton.

Other senior health officials The Age spoke to noted that during previous public crises, such as bushfires, the state emergency commissioner was always the central figure in the public response, while in the pandemic, Premier Daniel Andrews had played the leading role in public messaging.

“The ministers and premiers slot around them and the chain of command is very, very clear,” a former senior health bureaucrat said.

Governance issues in Victoria’s Health Department and multiple restructures in DHHS in recent years were also blamed for its pandemic response falling short. Years of chronic underfunding and failures in its contact tracing system were also cited as major shortcomings.

Professor Mathews said that while he thought Professor Sutton was doing an exemplary job, he had been “pulled in to deal with the pandemic and find solutions to problems he had not created”.

“The basic problem is that the way the health system has evolved is that government bureaucracy has tried to de-medicalise it as much as possible,” he said.

"The medically qualified people are not the ones who make the funding or executive decisions. In one sense it is a good thing. But on the other hand, when you really need that expert advice and it's not acted upon sufficiently, governments can find themselves in trouble."

Underfunding of public health was not unique to Victoria, he said, adding the issue had grown over decades and under successive governments, as preventive health initiatives often struggled to get funding over what were seen as more urgent issues, such as pledges for new hospital wards and beds.

Professor Slevin said it was not clear how large Australia’s public health workforce was, and called for a full investigation into the sector’s capacity.

The association also wants a national approach to contact tracing, through a new body similar to the United States' Centres for Disease Control and Prevention.

“We have to be ready for this next time, because there’s likely to be a next time,” Professor Slevin said.

David Davis, former health minister for the Baillieu and Napthine governments, said he had heard from up to a dozen staff in Victoria’s public health team, complaining their advice was being ignored.

In other evidence to the inquiry, Ms Skilbeck said it was not possible to have "nil risk" in an environment where coronavirus existed, such as hotel quarantine.

Asked if there was anything tangible "we can hang out hats on" to determine what went wrong in hotel quarantine, Ms Skilbeck said: "I have to say, counsel, if I knew something tangible to hang our hat on there, we would have acted on it by now.

"Clearly [the outbreaks] were contrary to the intent of everyone involved."