CAMBRIDGE, Mass. (AP) – A Harvard University professor has ignited an international uproar and faces mounting scrutiny for alleging that Korean women who were kept as sex slaves in wartime Japan had actually chosen to work as prostitutes.

In a recent academic paper, J. Mark Ramseyer rejected a wide body of research finding that Japan’s so-called “comfort women” were forced to work at military brothels during World War II. Ramseyer instead argued that the women willingly entered into contracts as sex workers.

His paper has intensified a political dispute between Japan, whose leaders deny that the women were coerced, and South Korea, which has long pressed Japan to provide apologies and compensation to women who have shared accounts of rape and abuse.

Decades of research has explored the abuses inflicted on comfort women from Korea and other nations previously occupied by Japan. In the 1990s, women began sharing accounts detailing how they were taken to comfort stations and forced to provide sexual services for the Japanese military. 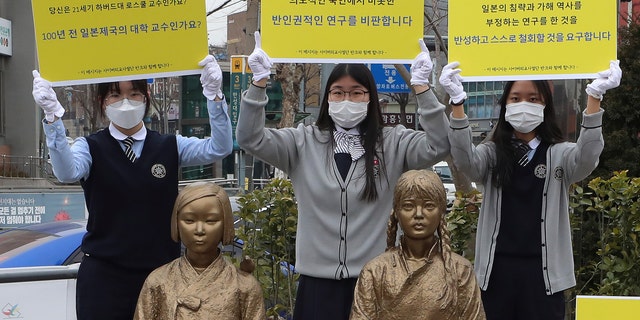 In this Feb. 25, 2021, photo, high school students hold up banners to protest a recent academic paper by Harvard University professor J. Mark Ramseyer, behind statues symbolizing wartime sex slaves in Seoul, South Korea. The signs read: "J. Mark Ramseyer, are you a 21st century professor at Harvard? Are you a university professor in the Japanese Empire 100 years ago? We criticize anti-human rights research." (Lee Jung-hoon/Yonhap via AP)

Ramseyer’s article, titled “Contracting for sex in the Pacific War,” was published online in December and was scheduled to appear in the March issue of the International Review of Law and Economics. The issue has been suspended, however, and the journal issued an “expression of concern” saying the piece is under investigation.

Most alarming to historians is what they say is a lack of evidence in the paper: Scholars at Harvard and other institutions have combed though Ramseyer’s sources and say there is no historical evidence of the contracts he describes. 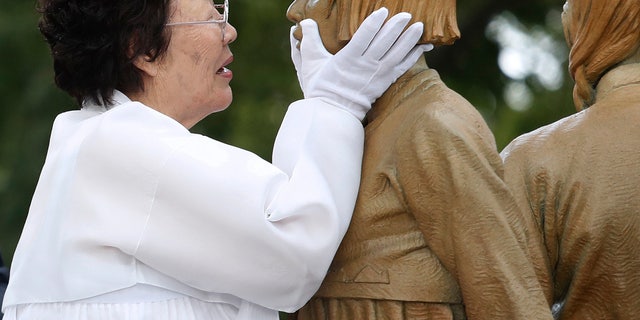 FILE – In this Aug. 14, 2019, file photo, Lee Yong-soo, who was forced to serve for the Japanese troops as a sex slave during World War II, touches the face of a statue of a girl symbolizing the issue of wartime "comfort women" during its unveiling ceremony in Seoul, South Korea. Harvard University law professor J. Mark Ramseyer alleged in a December 2020 article, scheduled to appear in the March 2021 issue of the International Review of Law and Economics, that the Korean women had actually chosen to work as prostitutes. Lee described Ramseyer’s claim as "ludicrous" and demanded an apology. (AP Photo/Ahn Young-joon, File)

In a statement calling for the article to be retracted, Harvard historians Andrew Gordon and Carter Eckert said Ramseyer “has not consulted a single actual contract” dealing with comfort women.

“We do not see how Ramseyer can make credible claims, in extremely emphatic wording, about contracts he has not read,” they wrote.

Alexis Dudden, a historian of modern Japan and Korea at the University of Connecticut, called the article a “total fabrication” that disregards decades of research. Although some have invoked academic freedom to defend Ramseyer, Dudden counters that the article “does not meet the requirements of academic integrity.”

“These are assertions out of thin air,” she said. “It’s very clear from his writing and his sources that he has never seen a contract.” 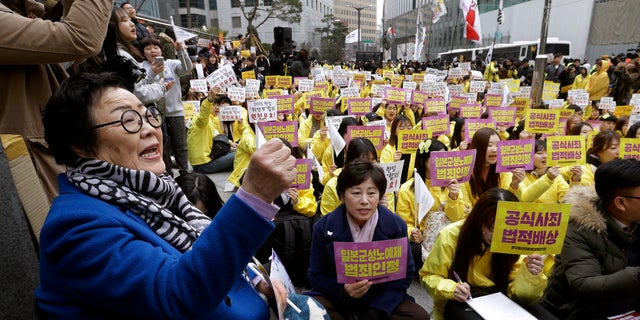 FILE – In this March 1, 2017, file photo, former "comfort woman" Lee Yong-soo, left, who was forced to serve for the Japanese troops as a sex slave during World War II, shouts slogans during a rally to mark the March First Independence Movement Day, the anniversary of the 1919 uprising against Japanese colonial rule, near the Japanese Embassy in Seoul, South Korea. Harvard University law professor J. Mark Ramseyer alleged in a December 2020 article, scheduled to appear in the March 2021 issue of the International Review of Law and Economics, that the Korean women had actually chosen to work as prostitutes. Lee described Ramseyer’s claim as "ludicrous" and demanded an apology. (AP Photo/Ahn Young-joon, File)

More than 1,000 economists have signed a separate letter condemning the article, saying it misuses economic theory “as a cover to legitimize horrific atrocities.” A separate group of historians of Japan issued a 30-page article explaining why the article should be retracted “on grounds of academic misconduct.”

At Harvard, hundreds of students signed a petition demanding an apology from Ramseyer and a university response to the complaints against him. Harvard Law School declined to comment.

A United Nations report from 1996 concluded that the comfort women were sex slaves taken through “violence and outright coercion.” A statement from Japan in 1993 acknowledged that women were taken “against their own will,” although the nation’s leaders later denied it.

Tensions flared again in January when a South Korean court ruled that the Japanese government must give 100 million won ($90,000) to each of 12 women who sued in 2013 over their wartime sufferings. Japan insists all wartime compensation issues were settled under a 1965 treaty normalizing relations with South Korea.

In South Korea, activists have denounced Ramseyer and called for his resignation from Harvard. Chung Young-ai, South Korea’s minister of gender equality and family, expressed dismay over the article last week.

“There is an attempt to distort (the facts about) the Japanese military’s ‘comfort women’ issue and tarnish the honors and dignity of victims,” Chung said, according to comments provided by her ministry.

An influential activist, Lee is campaigning for South Korea and Japan to settle their decadeslong impasse by seeking judgment from the International Court of Justice.

When asked about Ramseyer last Wednesday, Lee said: “That professor should be dragged to (the ICJ) too.”

The controversy, amplified by its source at an Ivy League university, has yielded new scrutiny of Ramseyer’s other work.

In response to new concerns raised by scholars, The European Journal of Law and Economics added an editor’s note saying it’s investigating a recent piece by Ramseyer — this one studying Koreans living in early 20th century Japan. Cambridge University Press said a forthcoming book chapter by Ramseyer is “being revised by the author after consultation between the author and the editors of the book.”

Ramseyer repeated his claims about comfort women in a submission to a Japanese news site in January. In it, he alleged the women entered into contracts similar to those used under a separate, licensed system of prostitution in Japan. He rejected accounts of forced labor as “pure fiction,” saying the Japanese army “did not dragoon Korean women to work in its brothels.”

“Expressing sympathy to elderly women who have had a rough life is fine,” he wrote. “Paying money to an ally in order to rebuild a stable relationship is fine. But the claims about enslaved Korean comfort women are historically untrue.”

Opponents counter that many of the women were so young they would have been unable to consent to sex even if there was evidence of contracts.

“We’re really talking about 15-year-olds,” said Dudden, at the University of Connecticut. “This article further victimizes the very few number of survivors by asserting claims that even the author knows cannot be substantiated.”