A Halloween obsessed couple have spent seven weeks turning their home into a terrifying haunted house – for the 16th year – as Britons decorate their properties in preparation for the big night on Monday.

William Howson, 67, and wife Roslyn, 61, transformed their Motherwell home into a haunted house that leaves ‘adults terrified’ and sees people travel from all over Scotland for.

Guisers queue up for hours to go through the north Lanarkshire couple’s haunted house, which is kitted out with hundreds of creepy decorations and scary mannequins.

Mark Davenport, 55, has also spent the last five years building spooky displays at his home on Thicket Road in Fishponds, Bristol, since moving to the area. 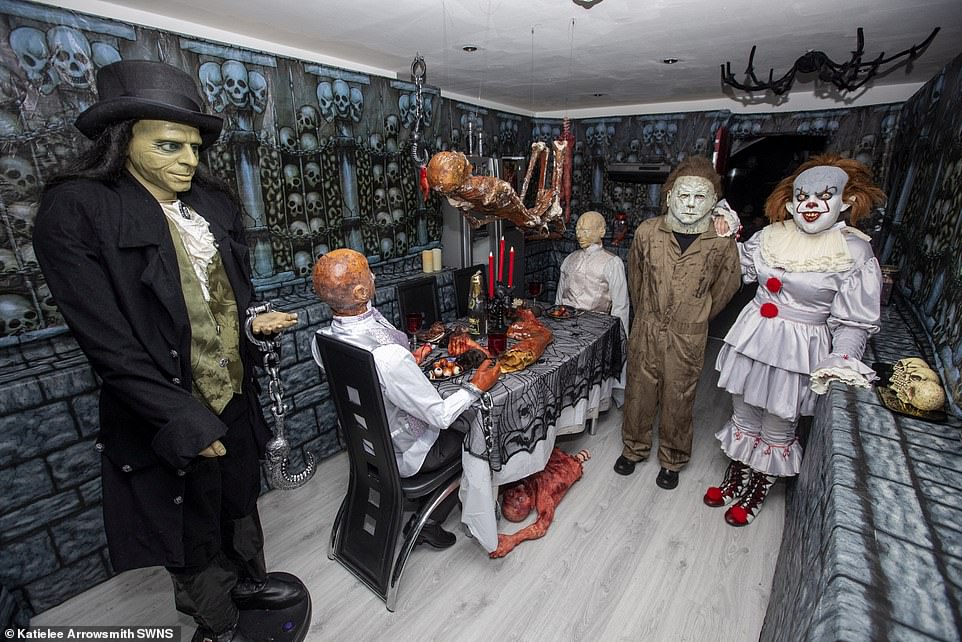 William Howson, 67, and wife Roslyn, 61, have also transformed their north Lanarkshire home into a haunted house – for the sixteenth year 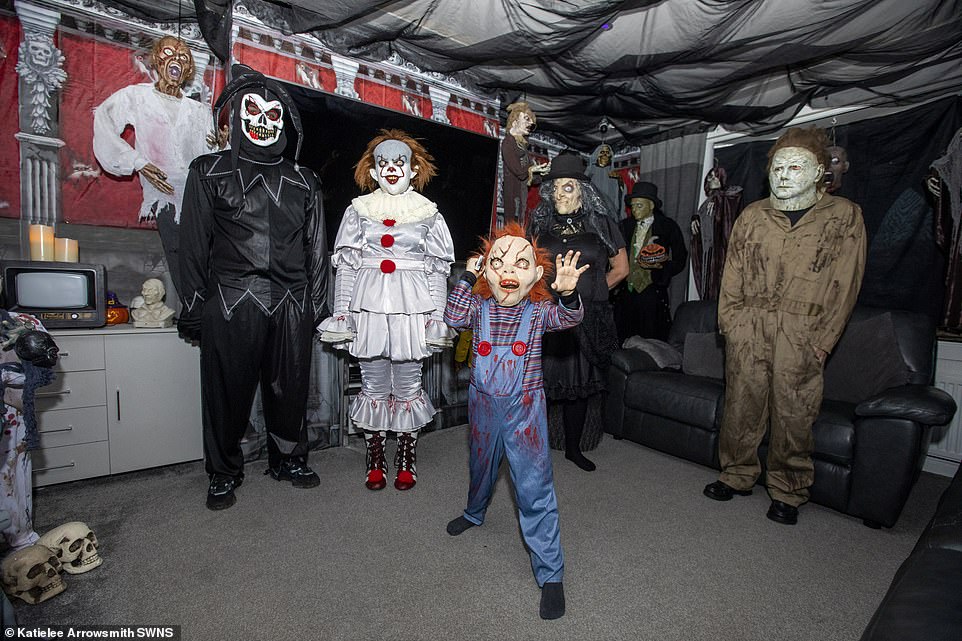 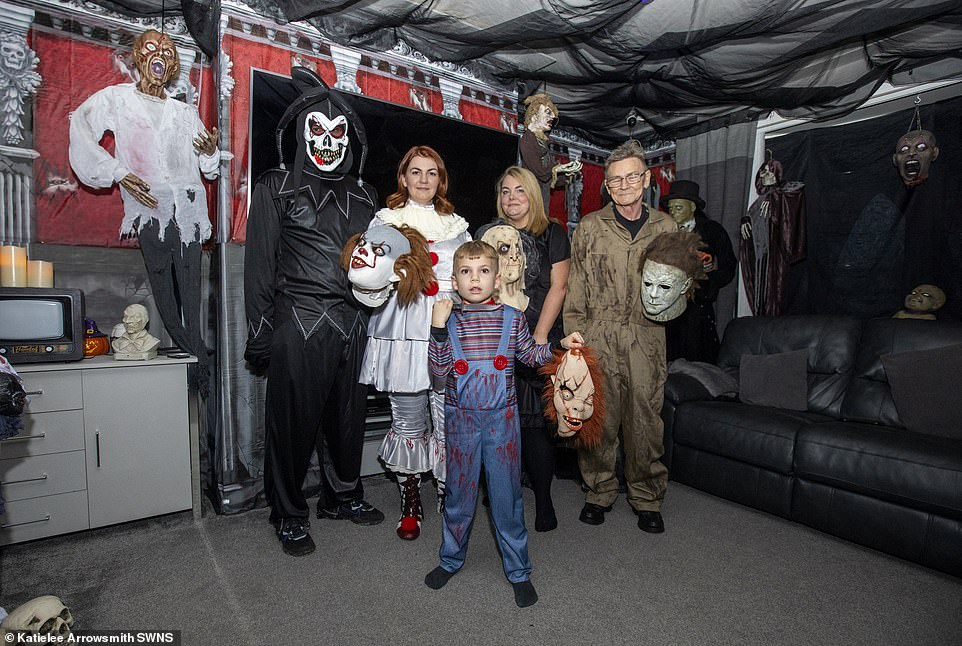 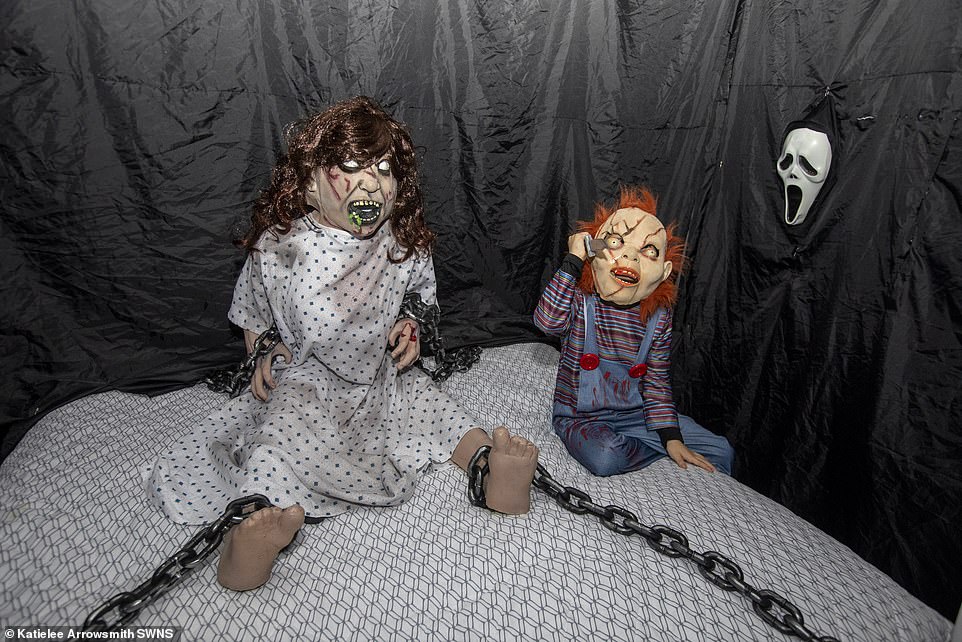 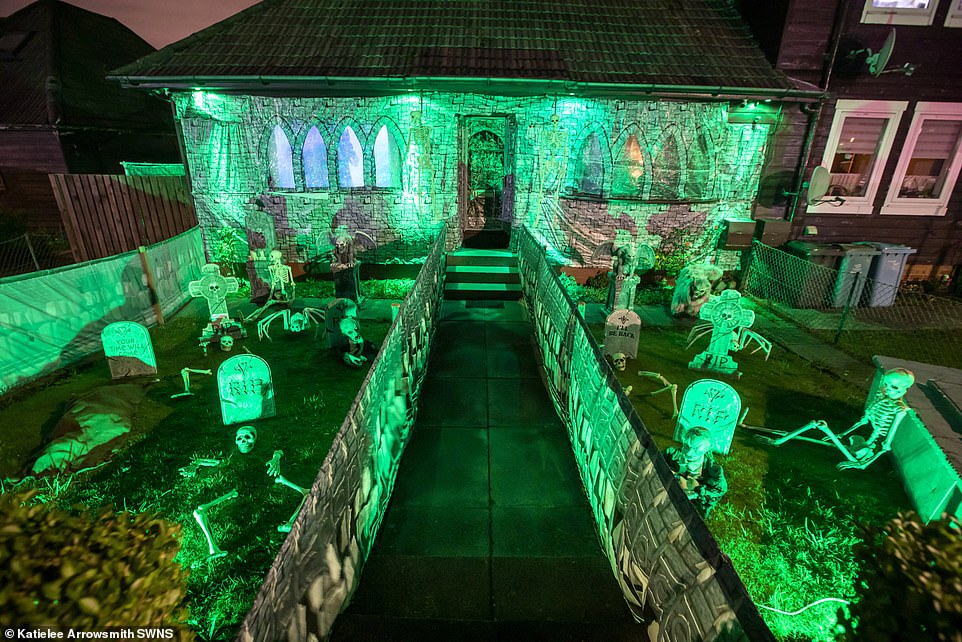 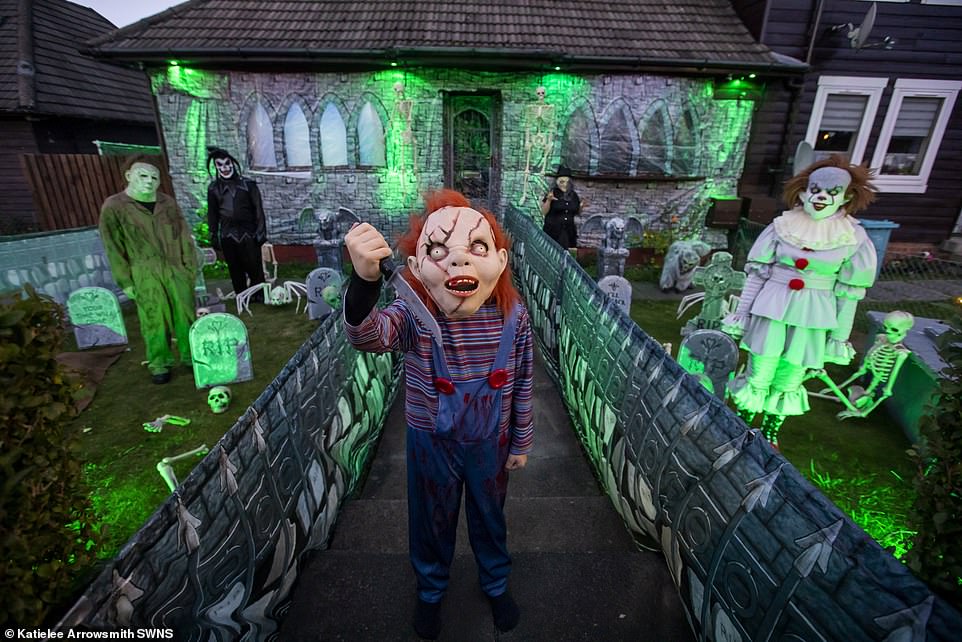 The spookily green lit graveyard makes a good setting for the characters played by the family (Pictured: Chucky, Pennywise, Michael Myers and a scary jester) 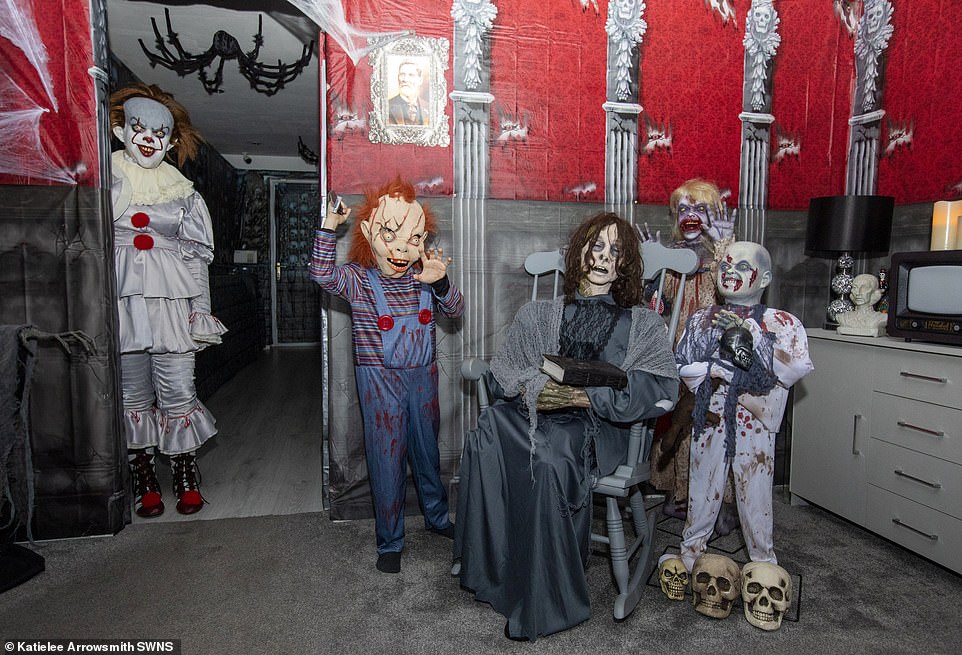 Mr and Mrs Howson began their spooky attraction in 2006 and have welcomed hundreds of trick-or-treaters over the years.

It takes seven weeks to get their house ready for the Halloween display which is spread over their living room, kitchen, bedroom, hall and garden.

The couple has welcomed 600 people to their house in Motherwell in previous years and will open their doors again on October 31.

Dad-of-four Mr Howson said they never considered cancelling the event despite the cost of living crisis – and that it’s all about having fun.

The retired carpet fitter, who has 17 grandkids and one great-grandchild, said: ‘We have been doing it for 16 years now. 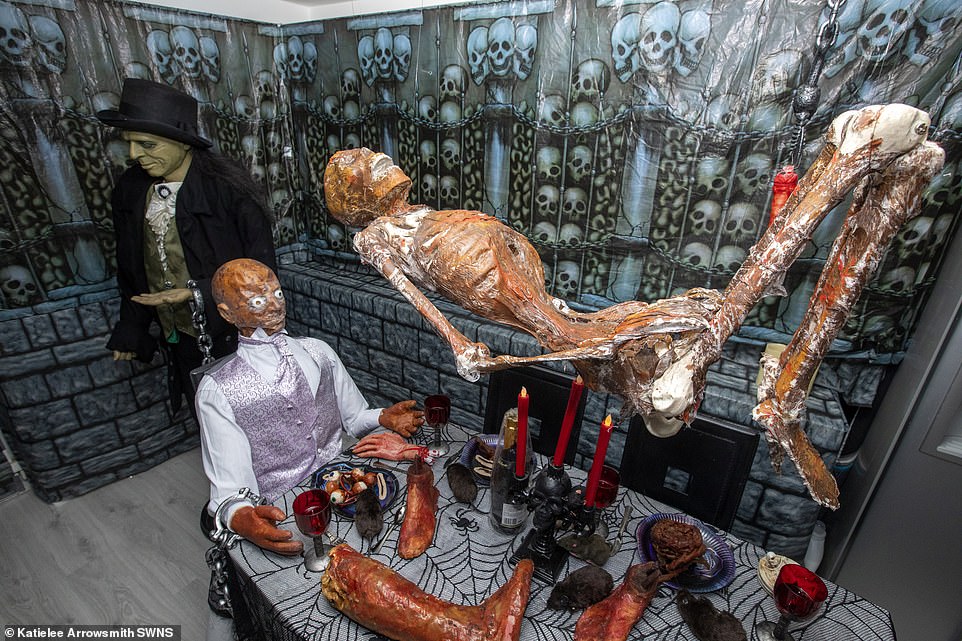 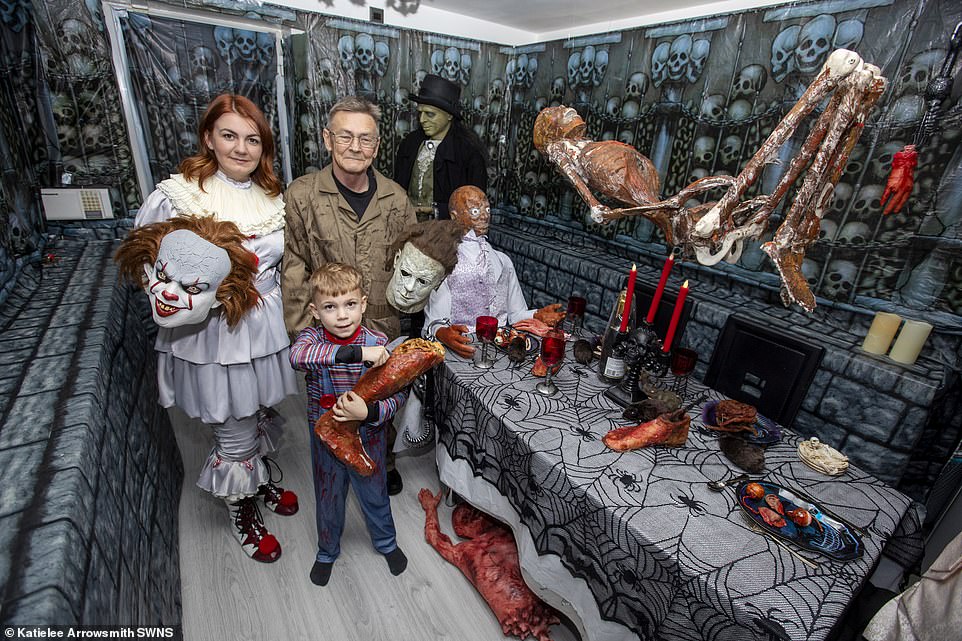 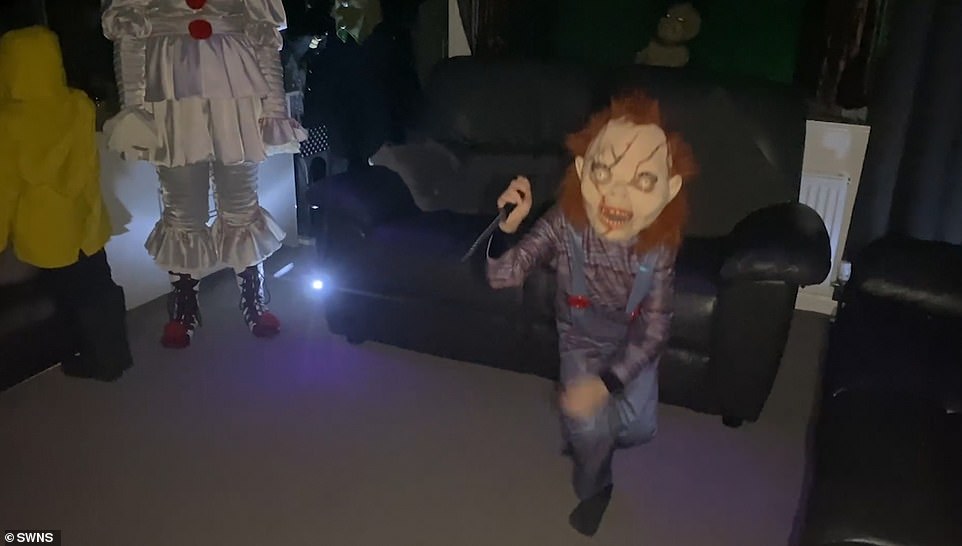 In a video of the Howson’s haunted house, grandson Joshua can be seen dressed as Chucky 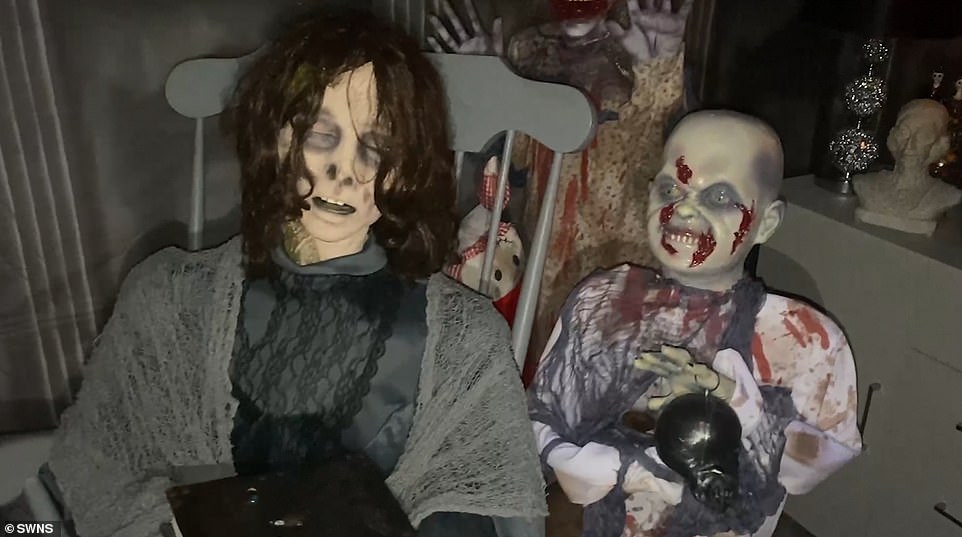 In a video of the north Lanarkshire spooky house, scary dolls can be seen covered in blood 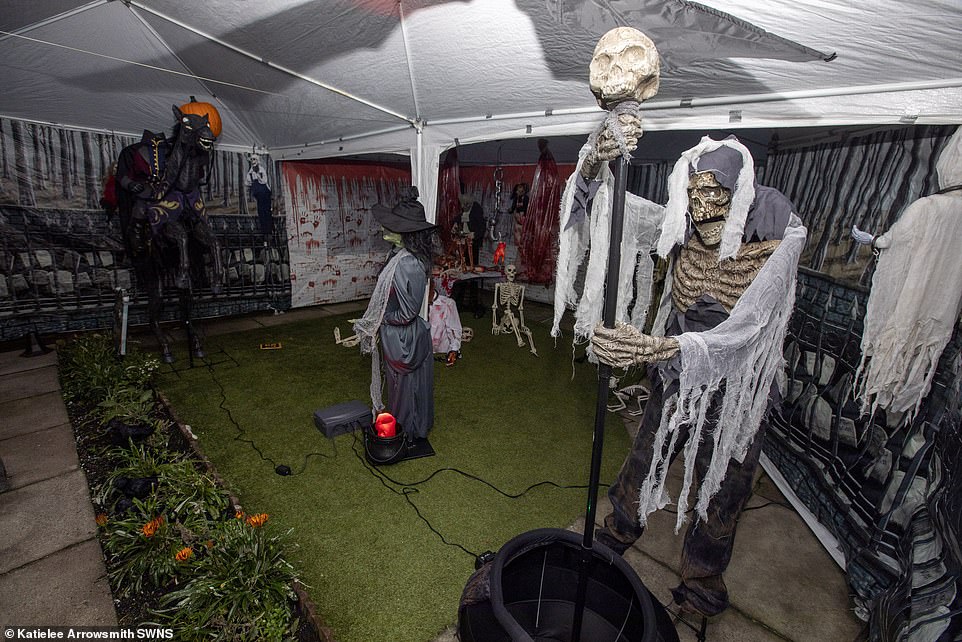 ‘We never had a thought about cancelling it this year.

‘It doesn’t’ actually cost us that much to run as we have accumulated the decorations over the years.

‘The only expense is the treats my wife gives out.

‘We don’t charge people to come in, it’s just all about the fun.

‘We have to start setting up in September, there are hundreds of decorations to get out, so it takes us about seven weeks.

‘The decorations are in the hall, the kitchen, the bedroom, the living room and the garden.

‘It can be quite awkward to live with all the stuff out, especially in the kitchen when you are just trying to cook dinner.’ 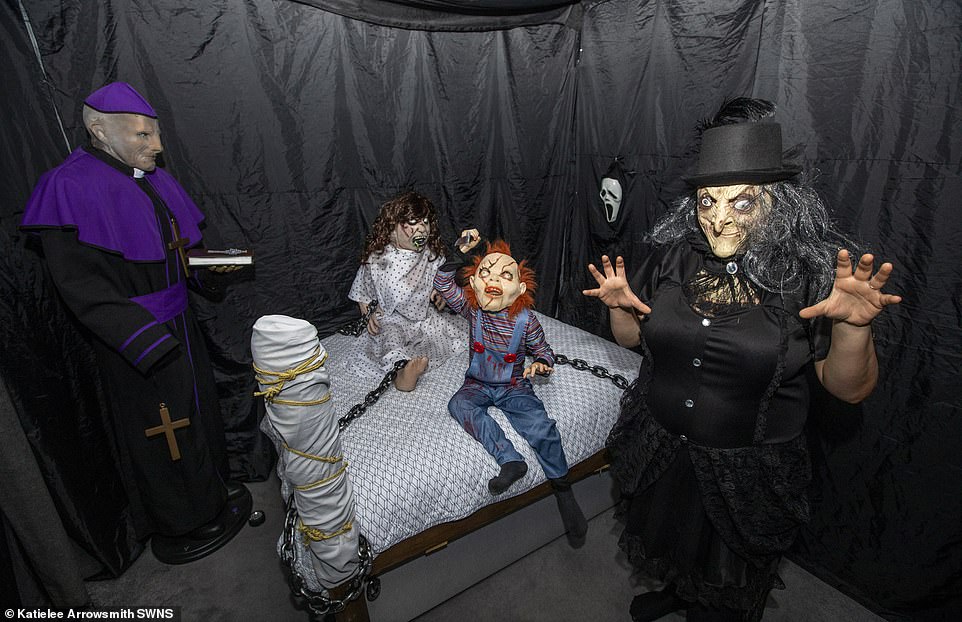 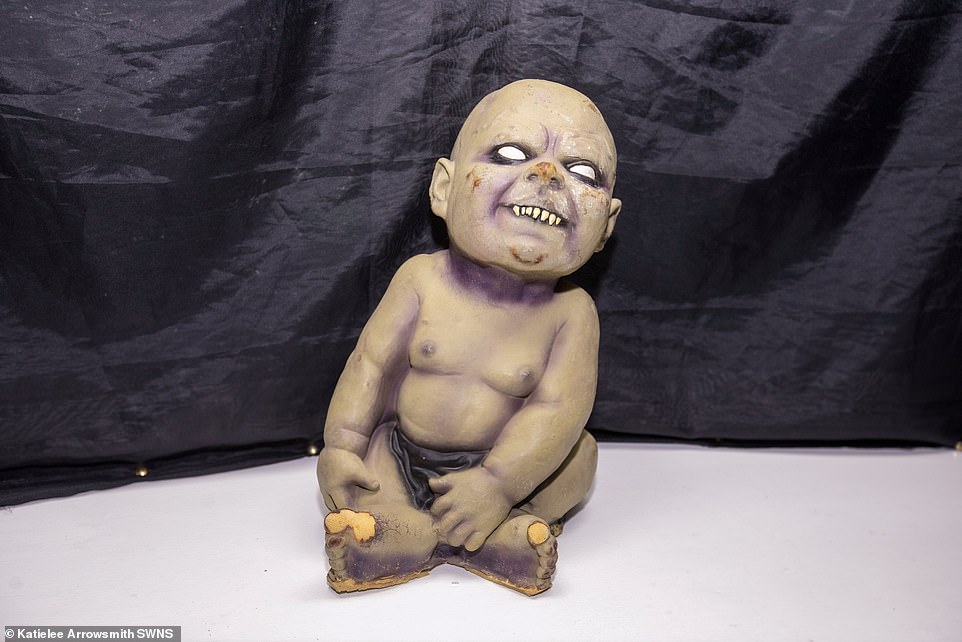 Pictured: One of the unnervingly spooky dolls at Mr and Mrs Howson’s haunted house in north Lanarkshire 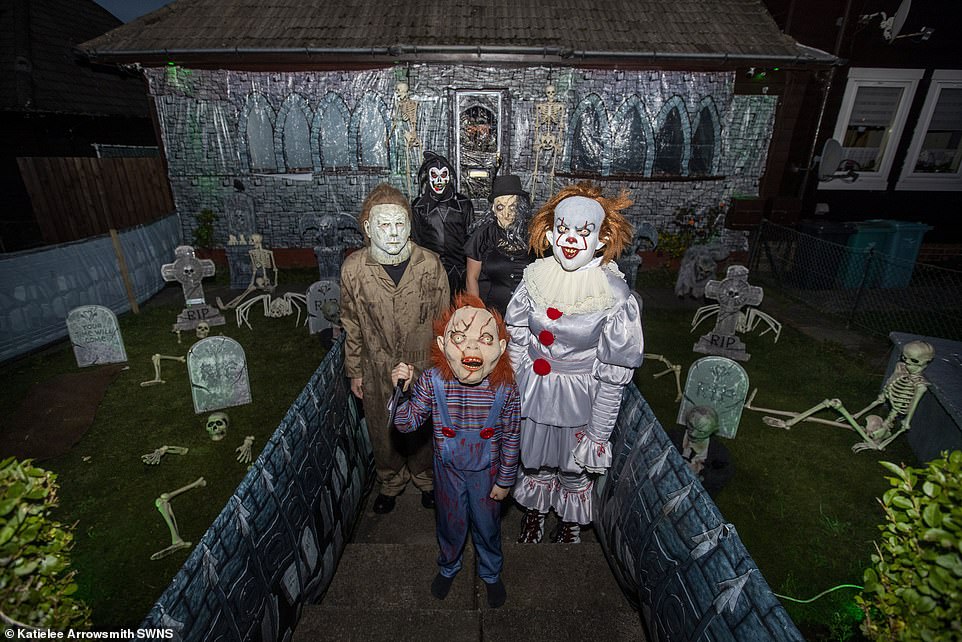 Pictured: Joshua as Chucky, Nicola as Pennywise, Mr Howson as Michael Myers, Colette Boyd as a scary witch and Joshua Brown as a scary jester 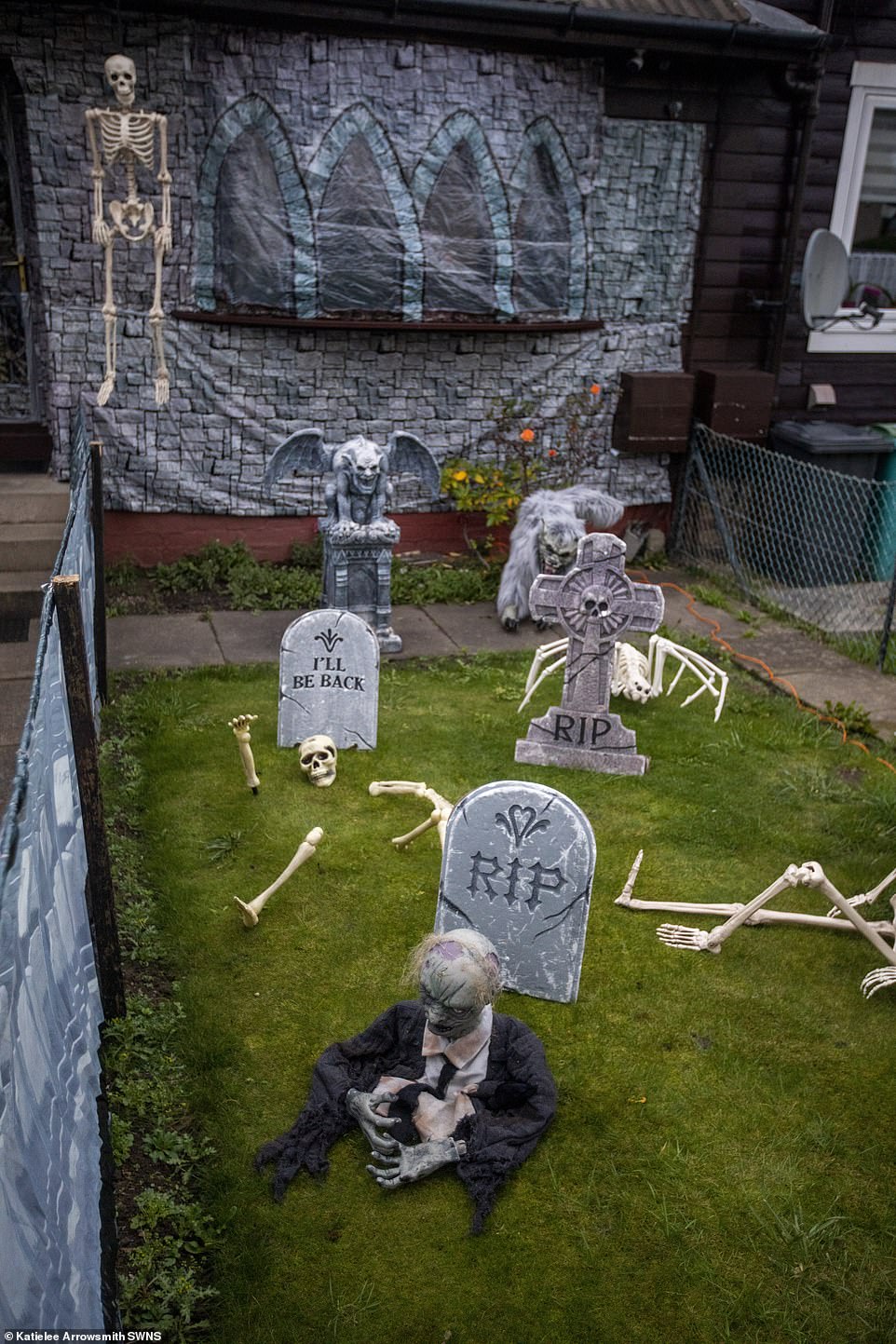 Outside the home of Mr and Mrs Howson, where they have hosted a haunted for 16 years, is a graveyard

His daughter Nicola Howson, 28, dressed up as Pennywise while her partner Jordan Brown, 27, was a scary jester.

The couple’s son Joshua Brown, seven, went as Chucky and Mr Howson’s niece Colette Boyd, 35, was dressed up as a screaming witch.

Halloween mad Mr Howson said people come from all over Scotland to see the spooky display.

He said: ‘People will queue for hours to get in, we have had 600 people in previous years.

‘It’s so funny seeing people’s reactions to it, especially the adults who are scared.

‘It’s funny to see adults terrified and running out the door. 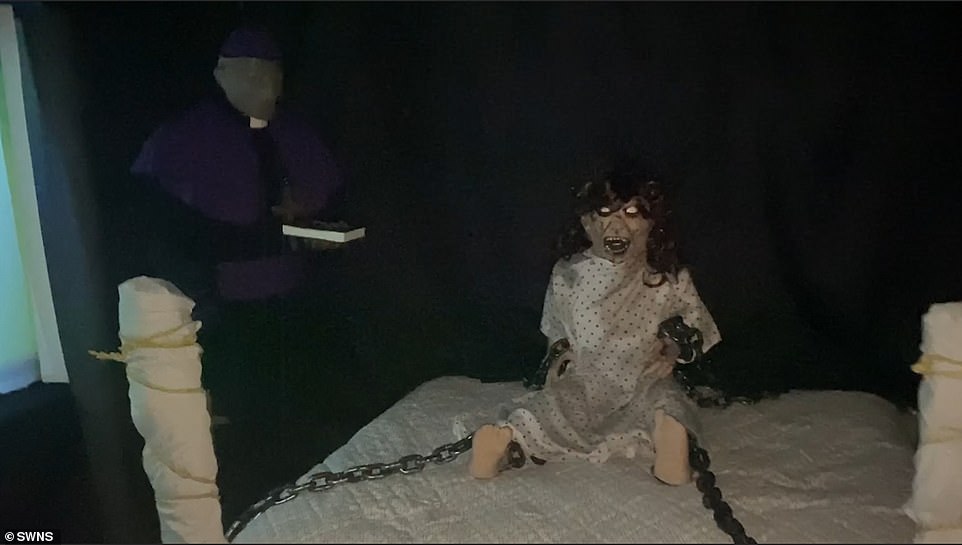 In a video of the Motherwell haunted house, a scene is shown of someone being exorcised while chained to a bed 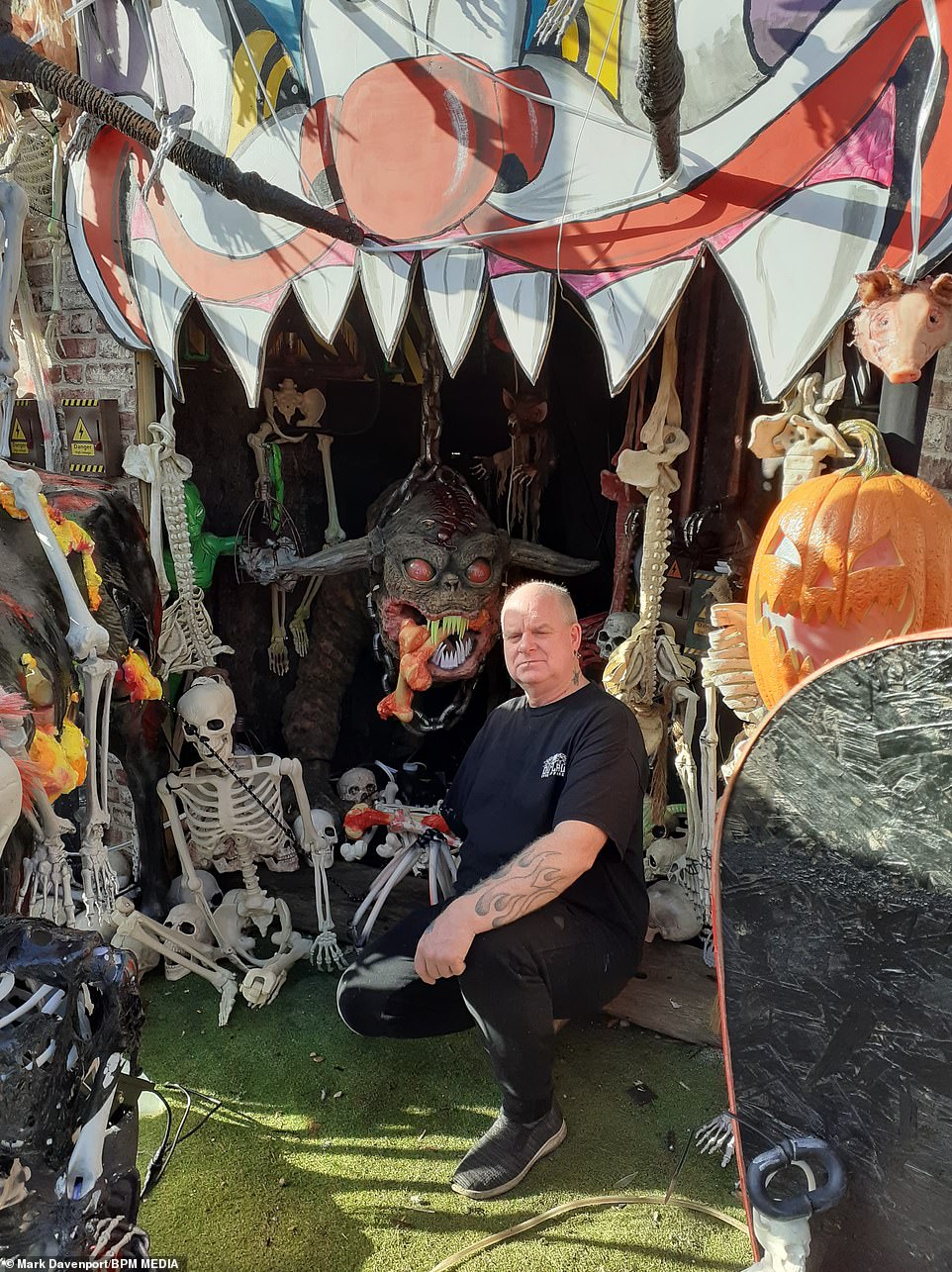 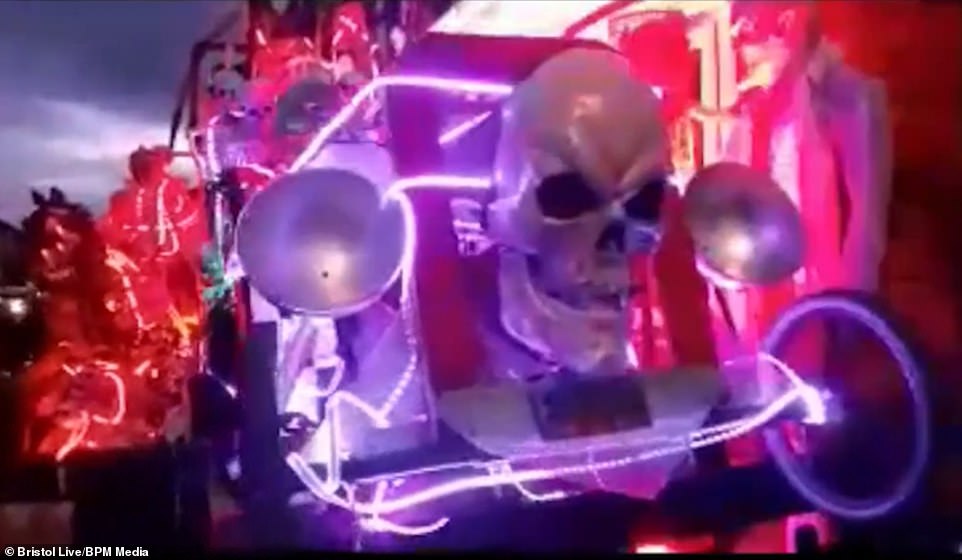 ‘Our neighbours all know what to expect now.

‘We are the Halloween house and people will stop by and ask if we are doing it again this year.

‘We put up black netting over the window when we start getting stuff out so it’s a real surprise.

‘All the family gets involved, the grandkids love it. There is not much they are scared of now.

‘I had a heart attack five years ago and it has been hard this year but I am still going.

In Bristol, Mr Davenport’s gory-looking designs may not be for the faith-hearted but it has been well-received by the local community as well as friends and family who have stopped by to check out his latest construction. 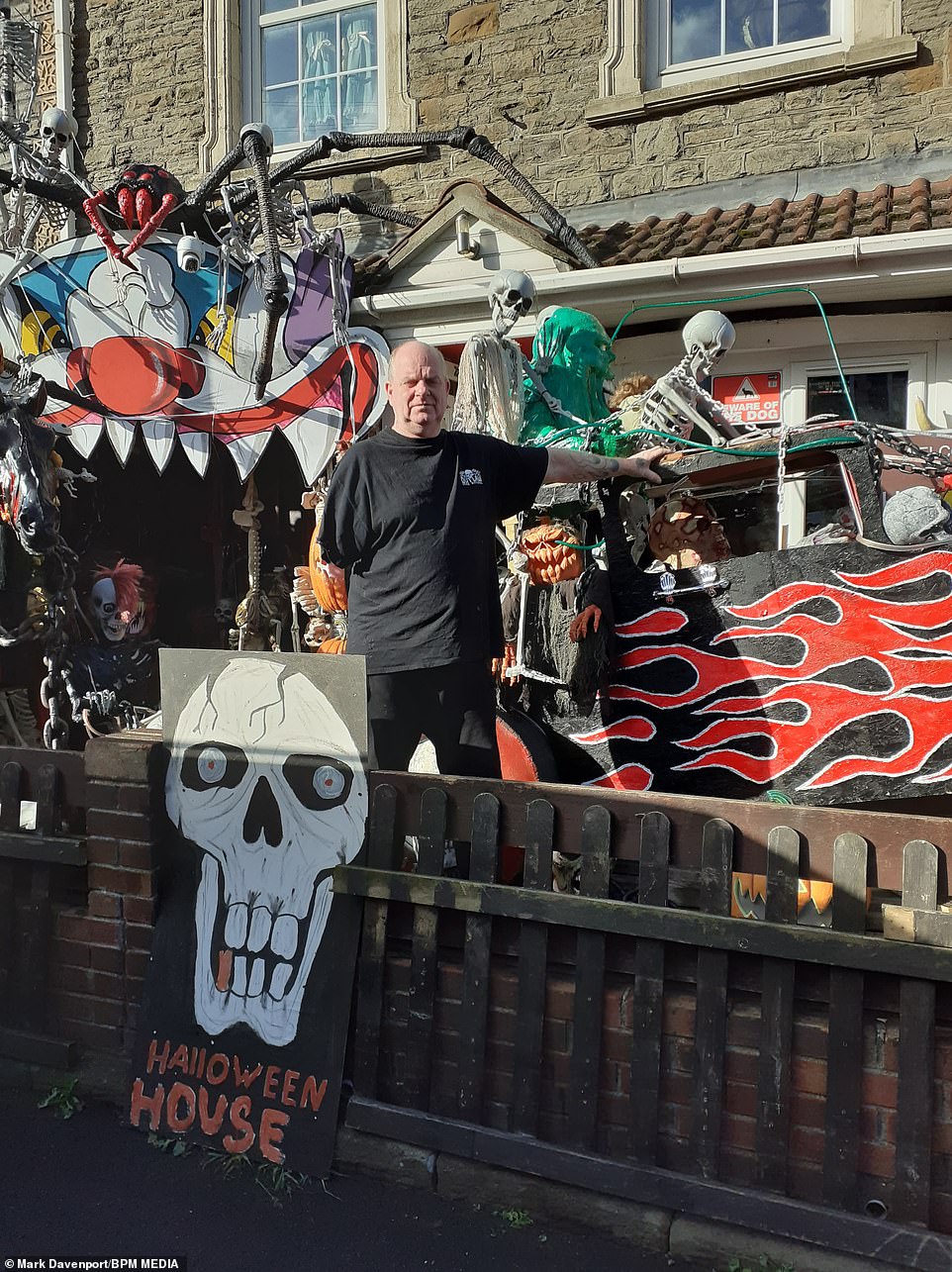 Mr Davenport’s ‘hot rod from hell’ display is popular with locals and his work has been featured at Comic and Horror Cons across the UK where enthusiasts are able to take pictures with some of their favourite movie characters from ‘Never Ending Story, E.T, Aliens and Ghostbusters’ 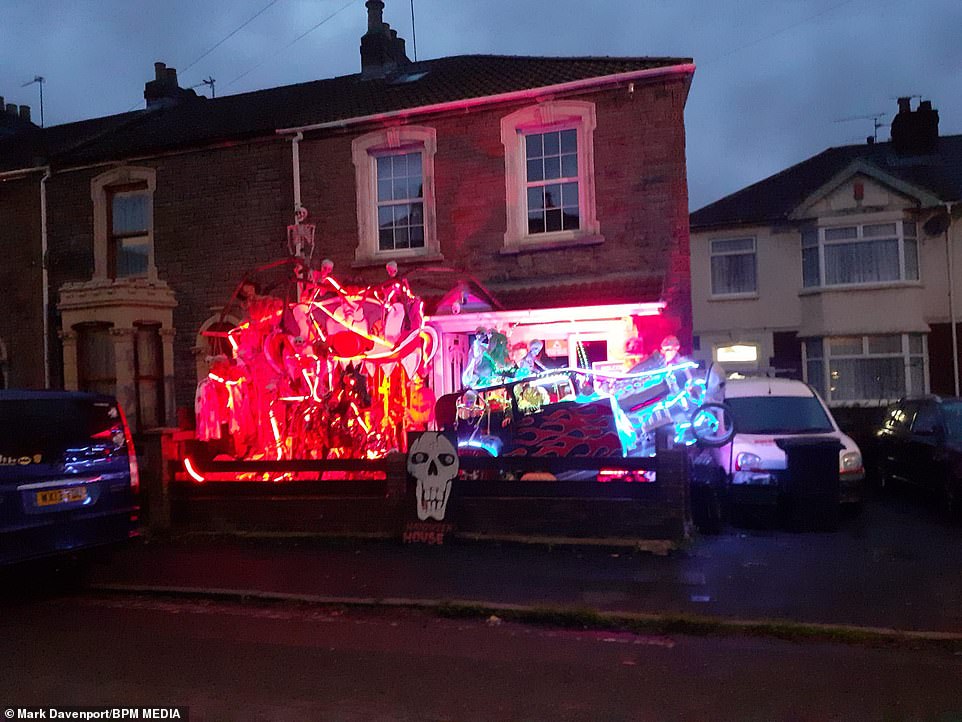 Mr Davenport was able to build a zombie horse, a hell bike and a huge hot rod with passengers and skeletal riders for his Bristol display 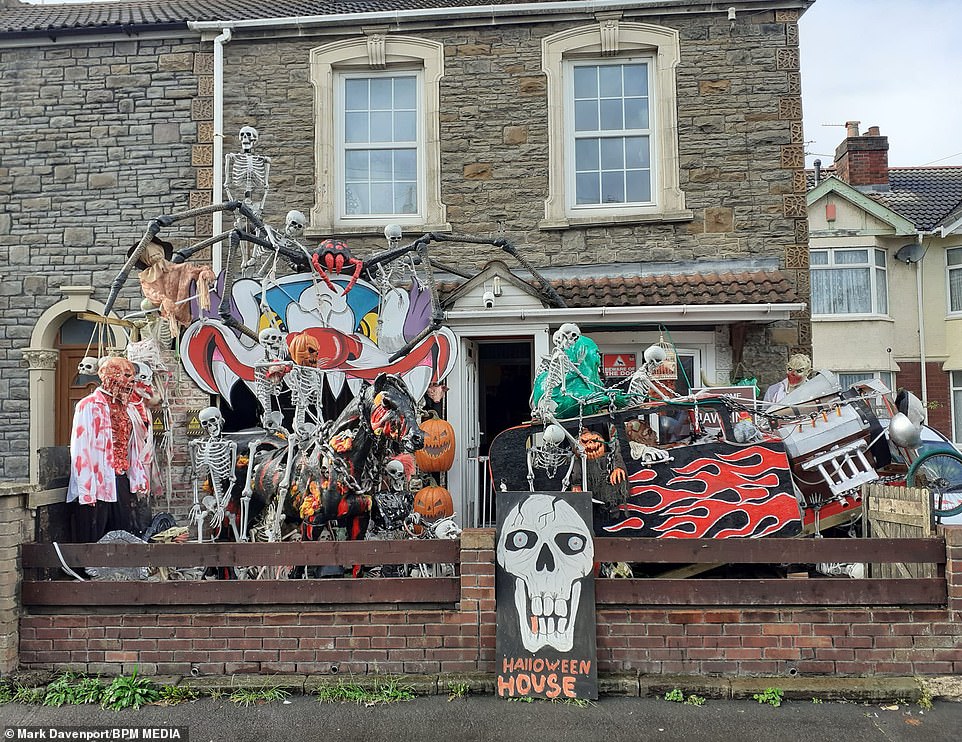 In Bristol, Mr Davenport says he likes to come up with back stories for his displays whether at home or at Comic-Cons

Using materials he has sourced himself for his ‘hot rod from hell’ themed display, he was able to build a zombie horse, a hell bike and a huge hot rod with passengers and skeletal riders.

He said: ‘Over the last years I’ve done clowns, witches, horse and carriage and a pirate ship – but this year a hot rod escaping from hell.’

Mr Davenport’s incredible work has been featured at Comic and Horror Cons across the UK where enthusiasts are able to take pictures with some of their favourite movie characters from ‘Never Ending Story, E.T, Aliens and Ghostbusters’.

He said he enjoys coming up with back stories for his displays whether at his home or at Comic-con shows in locations such as Scotland, Wales or Weston-super-Mare.

Mr Davenport has plans to set up his own creative business but is hesitant due to the current economic climate, the ‘UK prices and Covid’. For now, he’s delighted knowing his art ‘cheers up’ his local community and thanks everyone for checking out his incredible Halloween display.