Portapique, Nova Scotia: At least two people, one of them a police officer, have died in the Canadian province of Nova Scotia after a gunman went on a 12-hour rampage, the Canadian Broadcasting Corporation said on Sunday.

The accused gunman – 51-year-old Gabriel Wortman – is one of the dead, it said, citing sources. Police had arrested Wortman after a car chase earlier in the day on suspicion of shooting several people, whose conditions they did not specify. 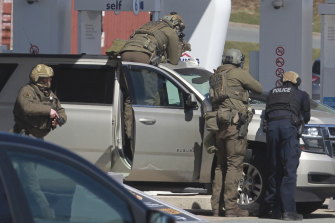 Royal Canadian Mounted Police officers prepare to take a suspect into custody at a gas station in Enfield, Nova Scotia on Sunday. Credit:AP

The Royal Canadian Mounted Police said the incident occurred in the small Atlantic coastal town of Portapique, about 130 kilometres north of the provincial capital Halifax.

"This is one of the most senseless acts of violence in our province's history," Premier Stephen McNeil told reporters without giving details.

A spokeswoman for the RCMP in Nova Scotia declined to comment on the CBC report. Police were due to give a news conference at 5pm local time.

Prime Minister Justin Trudeau, speaking to reporters in Ottawa, deplored what he called "a terrible situation."

Mass shootings are relatively rare in Canada, which has tighter gun control laws than the United States.

One local resident said she had come across two burning police vehicles while out driving on Sunday morning.

"There was one officer we could see on scene and then all of a sudden, he went running toward one of the burning vehicles," Darcy Sack told the CBC.

"We heard gunshots," she said, adding that one police officer looked to have been injured.

Police initially said Wortman was driving what appeared to be a police car and was wearing a uniform but later reported he was at the wheel of a Chevrolet sports utility vehicle.

The worst incident in Canada in recent years occurred in January 2017, when a man shot dead six people at an Islamic cultural center in Quebec City.

In August 2018, a man in the province of New Brunswick, which borders Nova Scotia, shot dead four people, including two police officers, in an apartment complex. In June 2014, in the same province, a man shot dead three police.