Grandson, 32, is given a treasure trove of 46 handwritten love letters sent by the grandmother he never knew to his grandfather in 1948 after they were rediscovered in an attic

A grandson has been given a treasure trove of handwritten love letters penned by the grandmother he never knew – 72 years after they were written.

Craig Johnson, 32, rediscovered the 46 letters written by Byddig Mai Williams in 1948 after they were found in an attic in Bodedern on Anglesey, North Wales last month.

The letters, penned to Mr Johnson’s grandfather Ieuan Gwynfor Jones, were written every day for a month, with each starting: ‘Hello my Darling’.

They were discovered in the attic of Ann Huws, who had put out an appeal on social media to locate relatives of the lovestruck couple. 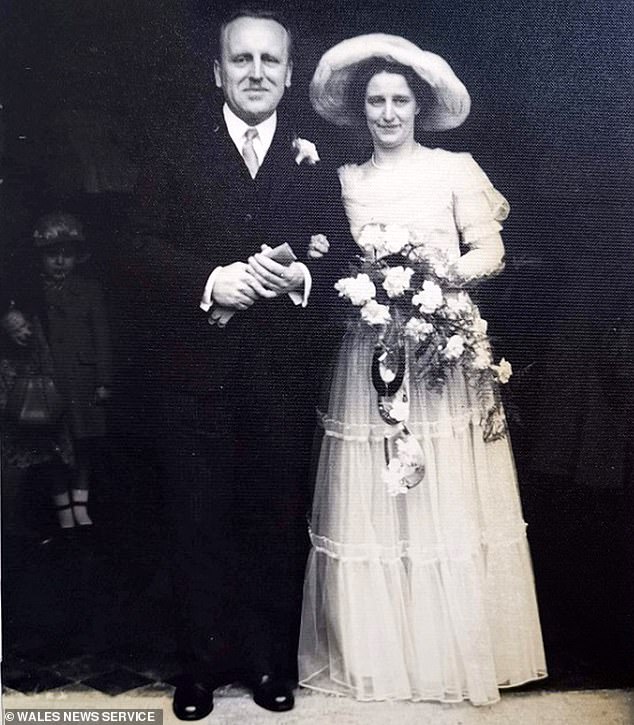 Pictured: Byddig Mai Williams who penned the letters to Ieuan Gwynfor Jones in 1948 on their wedding day

Mr Johnson then realised the letters told the love story of his grandparents and got in touch.

Ms Huws said: ‘I was looking through old paperwork when I found them, and I wondered what I was holding on to them for, but I didn’t want to throw them away.

‘There were 46 handwritten letters in total but I only read through a few of them. They’re definitely so in love.

‘If they were written by any of my family, I know I would want to have them, so I asked on Facebook if anyone knew their family members. 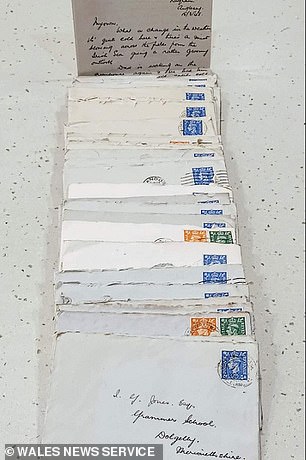 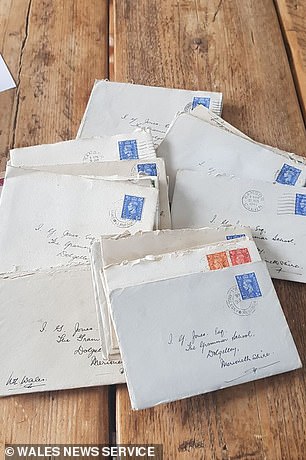 The letters (pictured), penned to Mr Johnson’s grandfather Ieuan Gwynfor Jones, were written every day for a month, with each starting: ‘Hello my Darling’

‘I never expected such a big response, and it’s fantastic that we were able to give them back to their rightful owner.’

The love letters were written by Ms Williams from her home on the island of Anglesey to be sent to her sweetheart who worked as woodwork teacher 60 miles away in a grammar school in Dolgellau.

They were collected by Ms Huws’ husband, who used to work for a house clearance business, and were only rediscovered last month.

The couple’s grandson was alerted to the appeal and realised the letters belonged to his grandparents – his grandmother he called Nain and grandfather Taid.

The pair married in 1950 and had one daughter – Elenna Dwynwen Jones – in 1955 who married Mr Johnson’s father. 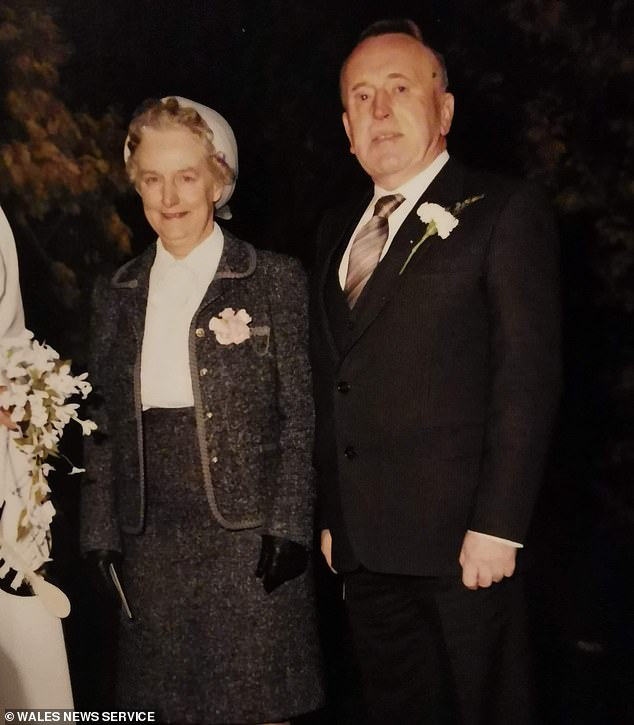 The letters were discovered in the attic of Ann Huws, who had put out an appeal on social media to locate relatives of the lovestruck couple (Pictured: Byddig Mai Williams and Ieuan Gwynfor Jones in the 1980s) 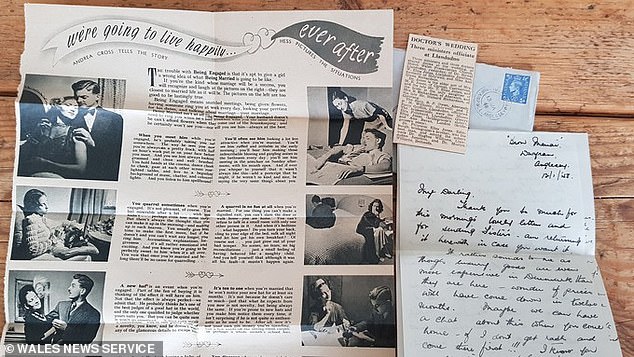 Ms Williams sadly died of pneumonia in 1985 aged 69 before Mr Johnson was born.

Mr Johnson, an engineer from Llangefni, Anglesey, said: ‘I didn’t see the Facebook appeal myself.

‘I was messaged by one of my mum school friends as she recognised the names and address. It was lucky really.

‘My Taid died in 1995 after a battle with cancer, but I remember bits about him because he lived with us for couple of years before his death.

‘It’s great to be able to have these letters.

‘Sadly, my mum also passed away three years ago from cancer and I started a memory box for my two sons, so that’s where I’ll keep these letters.

‘I’m so glad to have them back in the family.

‘It’s definitely something to show the kids when they’re older to help them understand who our family was.’