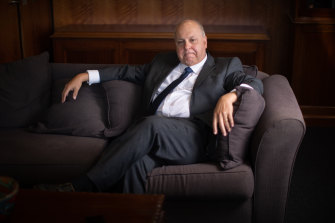 The Victorian government will use record levels of debt and deficit to spend $49 billion in the next four years in an effort to drag Victoria out of the disastrous COVID-19 recession.

Treasurer Tim Pallas said on Tuesday while handing down this year’s budget that the government had set an ambitious target of creating 400,000 jobs in the coming five years.

A massive spend, with the jobs plan at its centre, will take the government’s net debt to nearly $155 billion within three years, more than 28 per cent of Victoria’s total annual economic output.

The budget, delayed by seven months by the pandemic crisis, lays bare the early economic impacts of the pandemic.

Treasury believes 200,000 Victorian jobs were lost during the state's first round of coronavirus restrictions in April and May and another 73,000 in the second wave in August and September.

The jobless rate, expected to peak at more than 8 per cent by the end of 2020, with women and young people bearing the brunt of the pain, and remain well above 5 per for at least four years.

The high unemployment rate, combined with low wage growth is forecast, to hit the hip pockets of millions of Victorians sending total household income in the state backward by more than 1 per cent by 2024.

The public sector wage bill will grow sharply with the government’s employee expenses set to approach $30 billion this year and rising to more than $33 billion by 2023, with Mr Pallas saying on Tuesday that he was determined to support employment, including public sector jobs.

"This is a budget built on jobs and its focused on people," Mr Pallas said. "We're using our balance sheet to assist households and to assist businesses through these difficult times."

New spending unveiled on Tuesday included a $619 million jobs package, with $250 million for direct wage subsidies to try to get women and young people back to work. There will be $836 million in payroll tax relief to encourage employers to hire new workers.

Stamp duty waivers for buyers of homes worth up to $1 million, and costing the budget $293 million are designed to give the real estate industry a short-term boost, with 50 per cent discounts available on new build homes.

Health spending is set to soar, including $3 billion this year alone on the continued battle to suppress the coronavirus, with the government pledging an extra $9 billion of spending on the system in the coming four years.

The Andrews government’s signature ‘big build’ program will roll on with the average annual spend on infrastructure growing to $19.6 billion.

The largest tram order in decades will spend $1.48 billion building 100 new modern accessible trams to replace the ageing A and Z-class models with a new maintenance depot in Melbourne’s north-west to support 1900 jobs.

The Dandenong rail line will get a $276 million upgrade to allow it to take faster, high-capacity trains and there was $660 million for the next stages of upgrades on the Shepparton and Warrnambool lines.

The budget also has $1.6 billion for road network and infrastructure initiatives, including a $117 million package of road and intersection upgrades across Melbourne and $411 million to resurface, rebuild and maintain 1,700 kilometres of roads.

The record spending program comes as state government revenues suffer a dramatic collapse with nearly all of the state’s major revenue sources significantly down on pre-pandemic forecasts.

Treasury expects to get just under $67.7 billion this financial year, nearly $8 billion down from the $74.4 billion it forecast pre-pandemic.

Stamp duty receipts are down 25 per cent from an expected $6.25 billion to just $4.55 billion and payroll tax is down to $5.4 billion from nearly $7 billion forecast last year.

The tax collected on poker machine revenue has been cut almost in half from $1.1 billion to $611 million, with pubs and clubs forced to shut their doors for long periods of the year.

Crown Casino taxes are just a third of what was expected, at just $78 million.

The state government's biggest earner, Commonwealth grants including the state's slice of the national GST pie, was down nearly $1.5 billion, a first taste of what Treasurer Tim Pallas says will be a $12 billion write-down over the next four years.

The Treasurer argued in his speech on Tuesday that the short term costs of the state’s budget position were worth bearing with the big debts and deficits being used to get Victorians back to work.

“By using the strength of our balance sheet, we are able to protect the budgets of households businesses across Victoria,” Mr Pallas said.

“We are borrowing to make the necessary investments to drive a quicker and stronger recovery.”