Germany reports highest daily rise in Coronavirus cases in a month with 770 new cases – taking the country’s total to 188,534

Germany has reported its highest daily increase in coronavirus cases in a month after managing to contain its outbreak better than comparable large European nations.

A flurry of positive tests this week from an outbreak at a slaughterhouse in the western region of Guetersloh contributed the biggest daily increase since May 20.

The German government has stuck to its course of gradually reopening the country while seeking to clamp down swiftly on localised outbreaks. 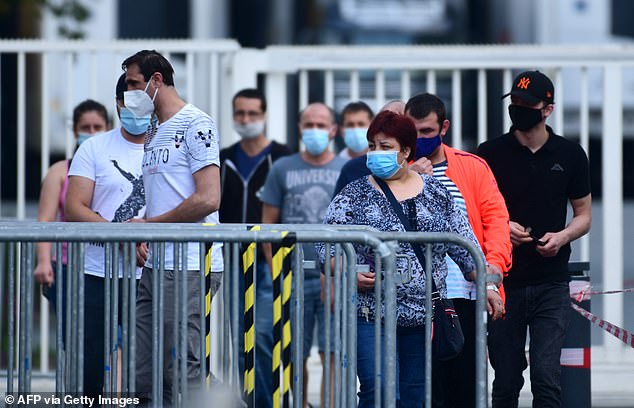 Employees stand outside the headquarters of abattoir company Toennies in Rheda-Wiedenbrueck, from which an outbreak occurred and increased positive virus cases

A free app launched on Tuesday to help trace people who may have been exposed to the virus has already been downloaded 9.6 million times in Germany, which has a population of 83 million.

Japan released a similar app on Friday, also using technology developed by Apple and Google. Officials say data will only be recorded and stored in individual users’ phones and deleted after 14 days to protect their privacy.

“We hope a widespread use of this app will lead to prevention of infections,” Japanese health minister Katsunobu Kato said.

China declared a fresh outbreak in Beijing under control after confirming 25 new cases among 360,000 people tested. That was up by just four from a day earlier.

A Chinese Centre for Disease Control and Prevention official said the number of cases was expected to fall soon in the outbreak centred on Beijing’s main wholesale market. The capital has confirmed 183 new cases over the past week. 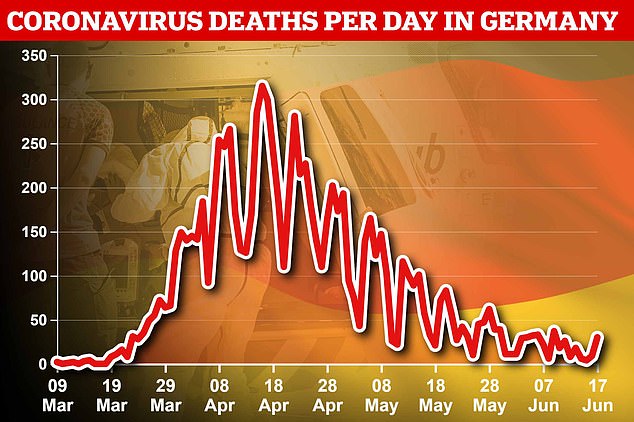 New daily coronavirus deaths in Germany, the country has been seeing a steady decline in the number of daily deaths

The 25 new cases reported on Friday in Beijing were among 32 nationwide in China, four among Chinese residents who had returned from overseas.

The pandemic is waxing and waning in many places, with cases soaring in Indonesia and India, Brazil and Mexico but appearing to be under control or contained in Thailand, Japan, Vietnam and New Zealand.

India recorded 13,586 newly confirmed cases on Friday, raising its total to 380,532, but shops, factories and places of worship have been allowed to reopen while schools and cinemas remain closed.

Infections surged in rural areas after hundreds of thousands of migrant workers left cities after losing jobs in a lockdown announced in late March. Such precautions are now restricted to high-risk “containment” zones.

In South Korea, outbreaks have inspired second-guessing on whether officials were too quick to ease social distancing guidelines in April after a first wave of infections waned. 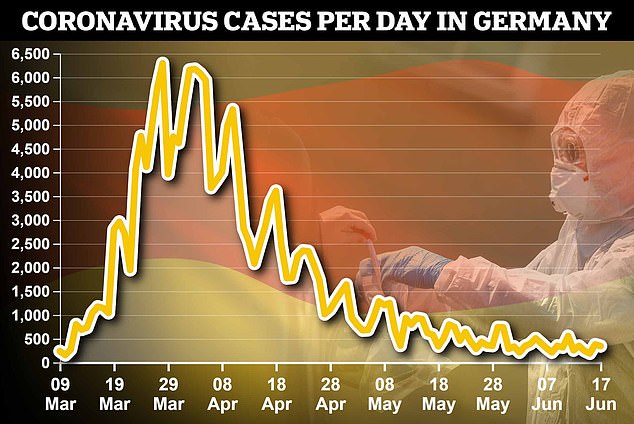 Officials reported 49 cases on Friday as the virus continued to spread in the densely populated capital area of Seoul, where half of its 51 million people live. About 30 to 50 new cases have been confirmed per day since late May.

Singaporeans were able to wine and dine at restaurants, work out at the gym and socialise with up to five people at a time from Friday, after the city-state removed most of its lockdown restrictions.

Coronavirus has infected more than 8.5 million people worldwide and killed over 454,000, according to figures compiled by Johns Hopkins University.

In the US, which has reported the most confirmed cases at nearly 2.2 million, states have pushed ahead with emerging from full or partial shutdowns despite surges in new cases in many places, including Texas, Oklahoma, Florida and California.

Aid group Doctors without Borders said at least 10 cases had been confirmed at one of the world’s largest refugee camps, the sprawling Dadaab complex in Kenya.

Humanitarian organisations have warned that the virus could have devastating impacts on crowded refugee camps, especially as travel restrictions have made the delivery of aid increasingly difficult.

Over 657 German slaughterhouse workers have been infected with coronavirus at a single meatpacking plant in the west of the country, officials announced today.

The spike in coronavirus cases today marks a significant rise for Germany who has recorded nationwide infections in the low hundreds lately.

Health officials in Guetersloh said they have received a total of 983 test results from workers at the Toennies slaughterhouse in Rheda-Wiedenbrueck. Of those, 326 tests were negative.

All 6400 employees of the plant and their close contacts are now in quarantine after the plant was closed just hours after the news at 2pm on Wednesday.

Since the start of the outbreak, Germany has recorded 188,474 confirmed cases of COVID-19 and 8,844 deaths. The infection rate declined sharply after authorities imposed nationwide social distancing rules in March and the daily case increase had averaged between 300-400 in June. 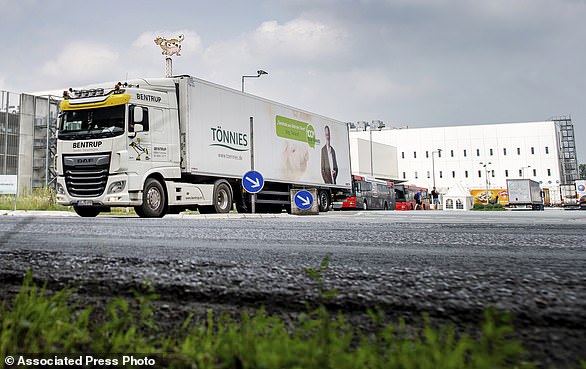 News of the outbreak in Guetersloh came as Chancellor Angela Merkel was meeting with Germany’s 16 state governors to discuss progress in tackling the pandemic.

Merkel said that the country would continue to try to relax restrictions while containing any local outbreaks.

She said: ‘We are far away from an exponential increase. That´s why I very much welcome that, as today in the county of Guetersloh for example, when there is such an accumulation of infections then measures are immediately taken, for example the closure of schools and such-like.’

‘We see from these outbreaks that the virus isn’t gone,’ she added.

Company officials at Toennies said the outbreak at the slaughterhouse may have been linked to workers taking the opportunity to visit their families in eastern European countries as border controls were relaxed.

Officials ordered the closure of the slaughterhouse, as well as isolation and tests for everyone else who had worked at the Toennies site – putting about 7,000 people under quarantine.

The infections pushed the county above the threshold of 50 new infections per 100,000 residents over a week at which local authorities in Germany have to consider new restrictions. Officials decided to close schools and child care centers across the county from Thursday until the summer vacation starts near the end of the month, but chose to avoid a wider-ranging lockdown.

There have been several outbreaks at German slaughterhouses in recent weeks, prompting the government to impose stricter safety rules for the industry and ban the practice of using sub-contractors.

The outbreak in Rheda-Wiedenbrueck, where Toennies operates one of Germany’s biggest slaughterhouses, could affect the meat supply in Germany. Sven-Georg Adenauer, head of the regional administration, said a fifth of Germany’s meat products could be unavailable while the plant is shut, the dpa news agency reported.

Gereon Schulze Althoff, the Toennies official in charge of the company’s pandemic response, said that the company had been ‘fighting like lions since February … to keep the virus out of the operation.’

Schulze Althoff said he had no conclusive explanation for why the infections had occurred now. But he noted that many foreign workers had wanted to go and see their families as European borders started to reopen, meaning that ‘we were exposed to new risks.’

‘We were aware of that, but we … carried out extra testing of people returning from holidays and so on,’ he added. ‘But we didn’t succeed in keeping out these sources or this source (of infection) – we don’t know which exactly.’

He said the company has a lot of workers from eastern European countries, and many went home over recent long weekends. He said cooled rooms may also have facilitated the virus spreading.

Germany started loosening its coronavirus restrictions in late April and has largely kept infection rates low, though local outbreaks linked to slaughterhouses, church services and a restaurant among other places have caused some concern.

This week, the German government launched its coronavirus tracing app, designed to help people learn if they’ve been in close proximity to someone who later tests positive.

Officials said the app was downloaded more than 6 million times in the first 24 hours.

Merkel declined to say whether she was using the new app, saying only that she was ‘willing’ to do so.