When Japan's emperor abdicated in April of last year, a name for the new era the country was entering was unveiled. The name chosen – Reiwa, or "pursuing harmony" – was the first in the monarchy's long history to be selected from Japanese literature rather than Chinese, highlighting Prime Minister Shinzo Abe's call for a more self-confident nation. 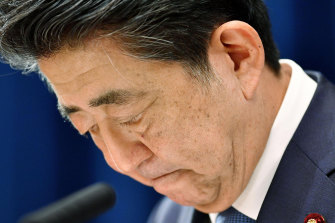 He returned to this theme in January, calling the Olympic Games, then scheduled for July and August of this year, the "Recovery Olympics". “Our country is no longer the Japan it used to be,” he told Japan's parliament. “We were able to completely smash ‘the wall of resignation'."

Barely two months later, Mr Abe was forced to postpone the Games until 2021. Last Friday's announcement of his resignation due to ill health has cast a further shadow over the country's future as it tries to keep a handle on its response to the COVID-19 pandemic, an assertive China and its increasingly self-absorbed major ally in Washington.

These are all problems that have confronted Australia's leaders, and Prime Minister Scott Morrison has often described Mr Abe as a mentor. Mr Morrison will no doubt be hoping that, as his Japanese counterpart did, he can end a revolving-door period for the prime minister's office and enjoy a tenure stretching over multiple terms.

At a time when our country's relationship with Beijing has taken a decided turn for the worse, that kind of stability and predictability in Tokyo becomes even more important. In attempting to counterbalance Chinese power in our region, and particularly its territorial claims in the South China Sea, Canberra has set increasing store by the idea of a “quadrilateral” alliance with Japan, India and the United States.

While none of the candidates lining up to lead Japan's ruling Liberal Democratic Party is likely to upend that approach, former defence minister Shigeru Ishiba, who had challenged Mr Abe for the top job before, has criticised his country's over-reliance on the US in defining the national interest and talked up the possibility of Japan building its own nuclear arsenal.

The remarkable truth about Mr Abe's legacy is that after eight years it is not clear what it will amount to beyond his own political longevity. Despite his association with "Abenomics", a policy which sought to revive confidence and growth through state spending, Japan’s debt and the problems associated with an ageing and declining population remain entrenched. Mr Abe did not achieve his aim of revising Japan's constitution so that its military could venture out into the world "normally". Women's participation in the workforce, another area where he promised progress, is still fragile and has been further threatened by the pandemic. Even Tokyo's comparative success in handling outbreaks of the virus has been described by leading Japanese scientists as “a mystery”.

The country's next leader will confront these problems, as well as calls for Japan to increase its role in its own region and further afield, without having Mr Abe's global standing.

When Yoshiro Mori, the head of Japan's Olympics organising committee and formerly prime minister for a year himself, was asked what would happen if the Games have to be postponed a second time, he insisted that they would be scrapped instead. Japan faces a number of similarly confronting decisions before it can truly say it has entered a new era and "smashed the wall of resignation". If Australia's hopes of a quadrilateral alliance are to have legs, it is very much in our interests that our Asian ally's leaders succeed in tackling those challenges sooner rather than later.

The Age’s acting editor, Michelle Griffin, writes a weekly newsletter exclusively for subscribers. To have it delivered to your inbox, please sign up here.