The future of a historic Grade I-listed church has been thrown into doubt after the Government bought neighbouring land and are converting it into a Brexit lorry park.

On surrounding land near medieval St Mary’s Church, in Sevington, Kent, construction is well underway for a large customs clearance depot with room for up to 2,000 lorries.

The site is intended for customs checks, and could also be a ‘temporary traffic management facility’ – a car park – for lorries if there are border delays, the government says. 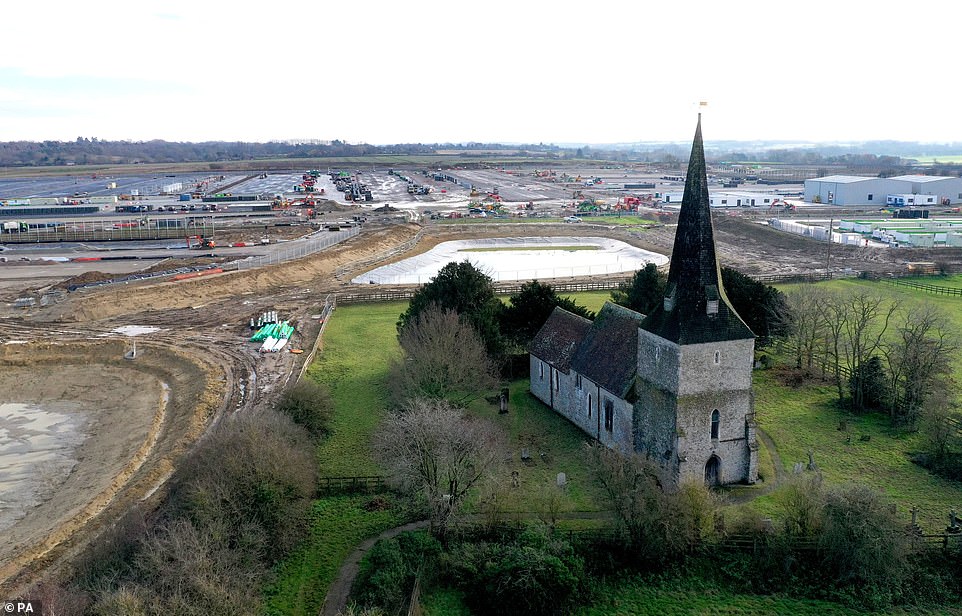 A view of the thirteenth century St. Mary’s Church in Sevington, Ashford, Kent, as the government develops a 27-acre site near the church into a post-Brexit lorry park while efforts continue to strike a post-Brexit trade deal before December 31 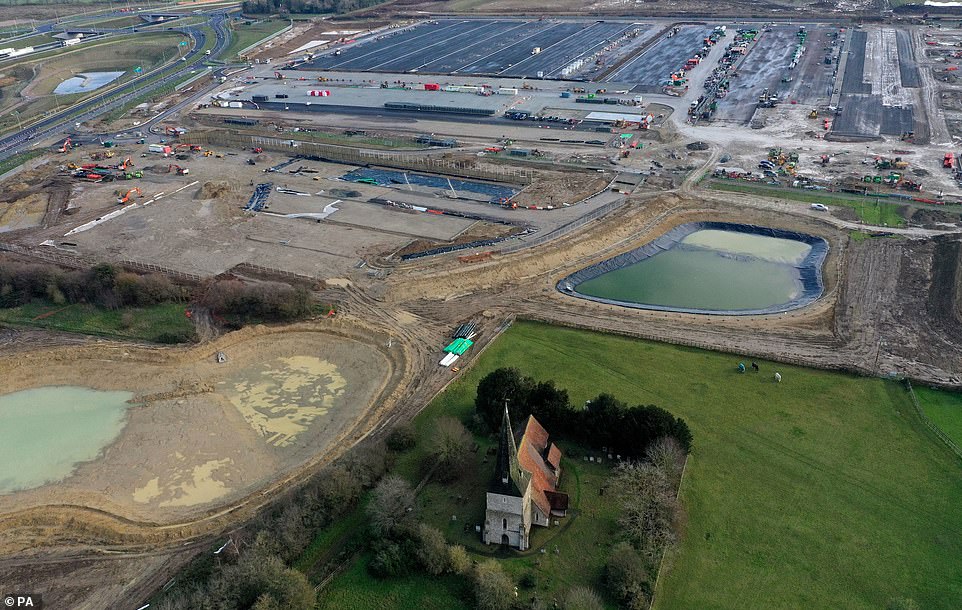 The 27-acre field is one of 10 sites around the country earmarked for potential border infrastructure, under powers the government has given itself to buy and build without consulting local authorities or residents first.

For St Mary’s Church, separated from the construction site by only a hedge, this means plans to develop the building into a community hub have been put on hold.

According to the Church Times, St Mary’s was due to receive £450,000 towards a reordering that would convert the building into a community hub.

The neighbouring land was owned by AXA and they had offered the cash as part of plans to build a warehouse complex on the site before they sold it to the Government earlier this year.

A spokeswoman for Canterbury diocese told the Church Times: ‘As part of their ownership of the land, the Government have taken on all of the obligations that apply to this ownership when it was transferred from AXA.’ 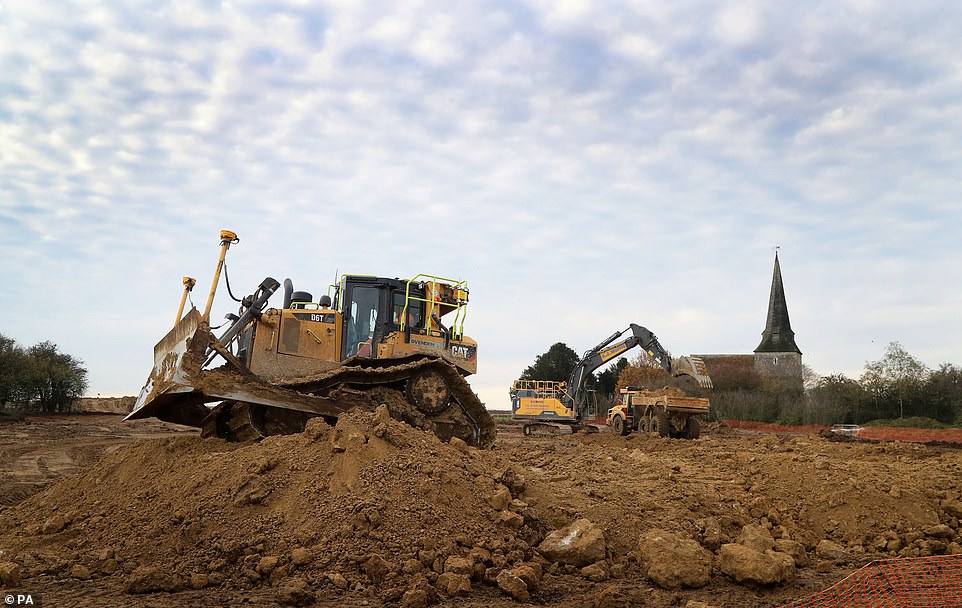 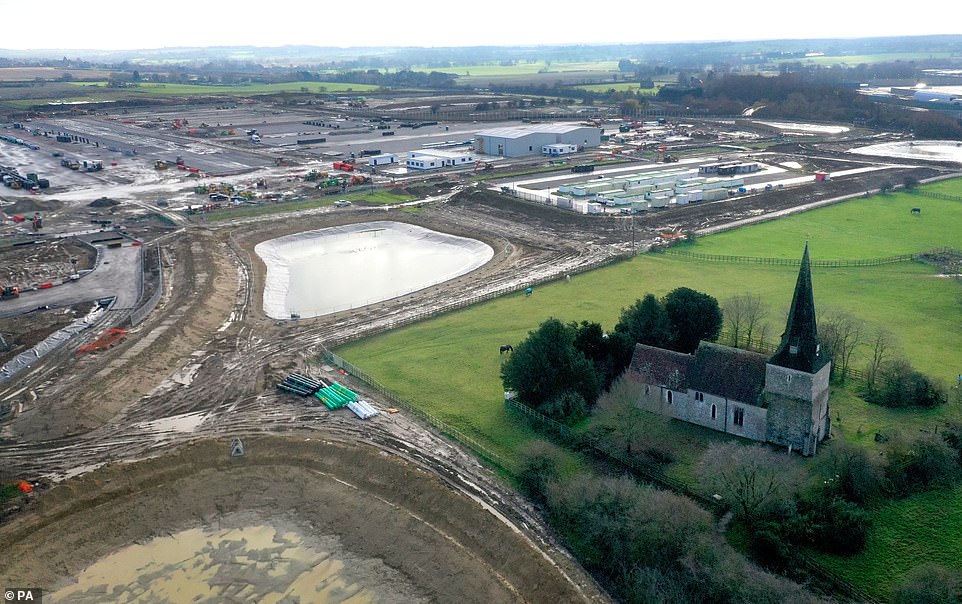 An aerial view of the church shows the proximity of the major construction work going on to build a post-Brexit customs depot separated from the historic church’s land by only a small hedge. The Government bought the land earlier this year 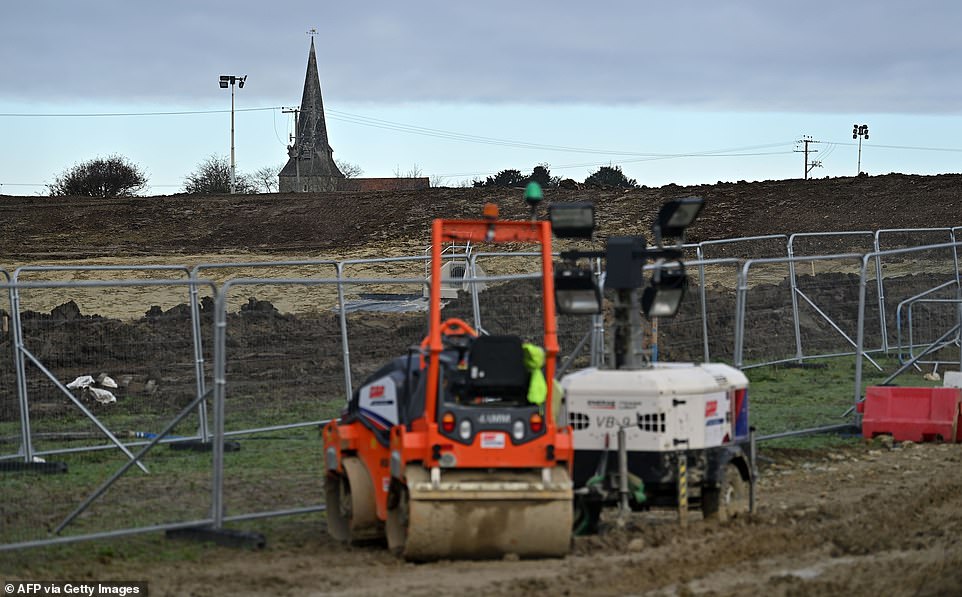 The spire of St Mary’s Church is pictured on the horizon as construction work continues at the site of the lorry park being built between the villages of Sevington and Mersham, near junction 10 of the M20 which, under Government plans to mitigate the impact of Brexit on the road network, will also serve as temporary lorry park if disruption reaches severe levels post-Brexit

However, she said that no detailed discussions had taken place and added: ‘Nor is anything yet confirmed with regards to taking forward our long-planned renovation work.’

The renovation plans included a new car park, new floors and tiling, a kitchen, improved lighting and heating, and repairs to the roof, timbers, and stonework.

The Team Rector of the Ashford Town Benefice, Canon Jeremy Worthen, told the Times: ‘We are working with those who are preparing for the proposed Inland Border Facility to ensure that our church building is properly protected during construction work.

‘Looking to the future, we are also working on plans to better equip our building to be a continuing resource for the whole community.’

The two villages of Sevington and Mersham, which are served by St Mary’s Church, are 15 miles from the Channel Tunnel and 20 miles from the UK´s biggest ferry port at Dover. 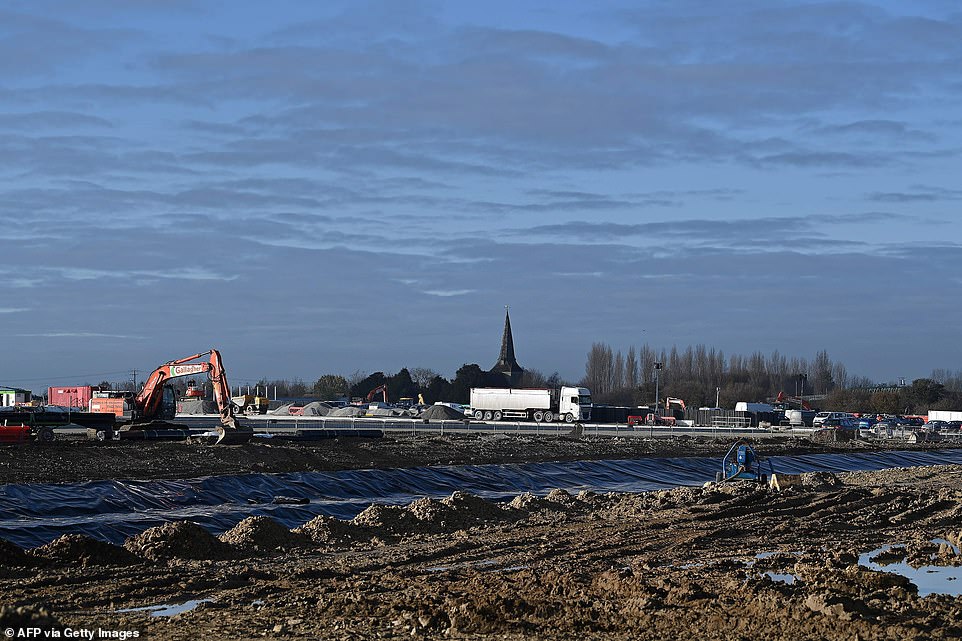 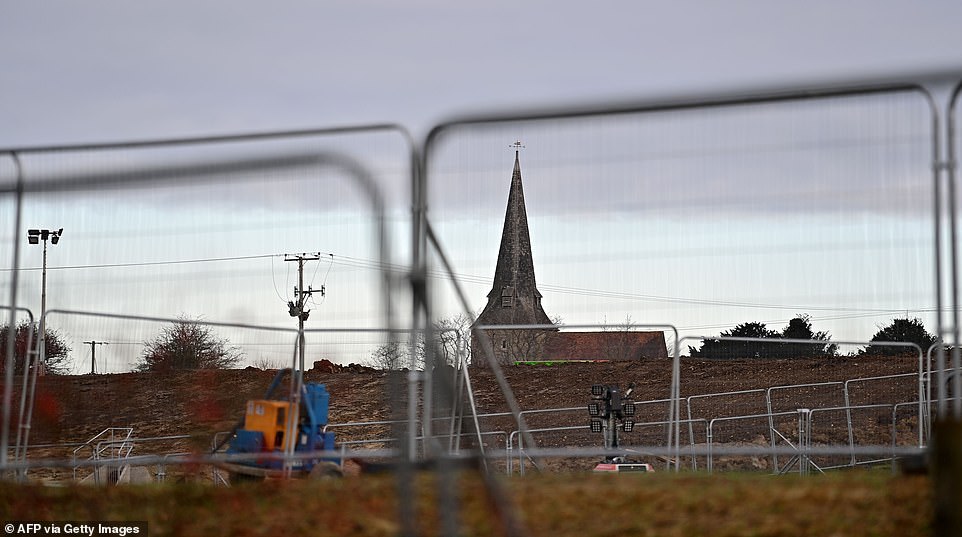 Renovation plans for St Mary’s Church, pictured here, included a new car park, new floors and tiling, a kitchen, improved lighting and heating, and repairs to the roof, timbers, and stonework if the £450,000 cash was received under the former deal

Between them, the two routes carry 4 million trucks a year, filled with food and all manner of other essential items.

Those goods moved back and forth freely while Britain was part of the EU´s single market and customs union.

The UK left the bloc´s political structures in January, and will make an economic break when a transition period ends Dec. 31.

That means Britain must erect a customs border with the 27-nation EU, its biggest trading partner.

Prime Minister Boris Johnson’s Conservative government has been reluctant to disclose details of its border plans.

But in September, it admitted its ‘reasonable worst-case scenario’ involved queues of ‘7,000 port-bound trucks in Kent and associated maximum delays of up to two days.’

The government´s plans for limiting the disruption include converting parts of the London-bound side of M20 motorway into a temporary car park for queuing lorries, and imposing a ‘Kent access pass’ – essentially a passport that lorry drivers heading for the EU must have to enter Kent from other parts of Britain.