Quiet optimism was emerging late on Thursday. The state’s much-lauded contact tracing system had, it seemed, again triumphed. Cases of the highly contagious Delta strain of COVID-19 were rising, and with the exception of one mystery infection, all were linked. Sydney was holding on.

But by late evening, as new cases emerged and the list of venues of concern were growing steadily- from a cafe in Potts Point to a gym in Bondi Junction and a hairdresser in Double Bay – the mood within NSW Health and the Berejiklian government shifted dramatically.

By 9.30am on Friday, on a phone hook-up with NSW Chief Health Officer Kerry Chant, Premier Gladys Berejiklian and her crisis cabinet (including Deputy Premier John Barilaro, who is in isolation in his Rushcutters Bay apartment), the previous day’s optimism had passed and unease set in. 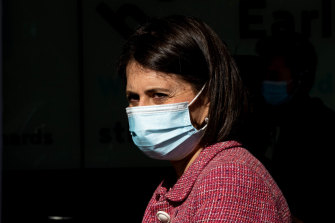 More than a dozen new cases had emerged overnight, and while contact tracing teams had already linked the majority of them, the virus was spreading at an alarming rate. NSW Health mostly knew where transmission was coming from, but they couldn’t stop it.

Chant’s advice to Berejiklian’s team was stay-at-home orders for seven days for the city and eastern suburbs. None of Berejiklian’s ministers disagreed with Chant’s recommendation, despite Treasurer Dominic Perrottet and Barilaro having previously led the charge to keep the economy open.

In the space of nine days, Sydney had gone from a single case of a limousine driver transferring FedEx aircrew to a wide-scale lockdown, with thousands of people in isolation, businesses forced to close and the already-struggling CBD once again empty.

As NSW has managed to keep community transmission largely non-existent in recent months, it has been drivers connected to the quarantine system – whether linked to returning travellers or aircrew – who have triggered two of the most recent outbreaks in Sydney.

The source of summer’s 150-person Avalon cluster, which prompted the Northern Beaches lockdown over Christmas, was never found.

The gaps in the system have resulted in states slamming borders shut to NSW and forcing many people into isolation. And from midnight on Friday, Sydney is locked down, with anyone who lives or works in the council areas of Woollahra, Randwick, City of Sydney or Waverley not allowed to leave home.

Way back in January, it was a patient transport worker who was the source of the Berala cluster in Sydney’s west that would eventually swell to 28 cases. Both outbreaks underline the fallibility of human systems expected to defend the population against the virus while most of us remain un-vaccinated.

Loopholes in public health rules for drivers would within a week circle back to the Berejiklian government, with Health Minister Brad Hazzard and the Premier forced to briefly isolate while awaiting COVID-19 test results, and more than 100 people – including Barilaro, most Nationals ministers and backbenchers as well as staffers and even three Herald journalists – in strict isolation.

An annual National Party post-budget fundraiser on Tuesday night left Macquarie Street in chaos after one of the MPs who attended, Agriculture Minister Adam Marshall, later tested positive to the virus. He had been at a venue of concern, Christo’s Pizzeria in Paddington, on Monday night and crossed paths with an infectious person. By Thursday, once Marshall’s positive result was confirmed, Parliament was a ghost town, with all MPs undergoing rapid testing in order to finalise urgent business of the house, and others being told to isolate in their offices.

But this outbreak is different to January’s Berala cluster. The virus has changed. It’s mutated and new more transmissible variants have emerged, and the Delta variant’s rise has meant spread has been swifter.

The second difference is vaccination. Despite only 43 per cent of people aged over-50 and 61 per cent of over-70s in NSW having received at least one dose, more than 2 million vaccines have been administered. Epidemiologists say each vaccination is a point on the board and a reminder that we will never know how many invisible cases could have shown up but didn’t because of effective vaccines.

“We will need widespread vaccination, about 70 or 80 per cent of the adult population, to see large drops in transmission and decrease mortality by 90 per cent,” says infectious disease expert Professor Peter Collignon. “Vaccines are highly effective in preventing against serious disease and death, including for the Delta variant.”

On Friday, Hazzard acknowledged “there may be a small number of people who don’t comply with the expectations,” and that guidelines would “step up for mask-wearing for those drivers of people coming in from international flights – whether they’re passenger flights or whether they’re cargo flights”, as part of new public health order directions.

“There are crews involved with the transportation of passengers in some cases. It would appear that there may be a small number of people who don’t comply with the expectations,” Hazzard said.

Late on Friday, public health orders for drivers and people working quarantine changed: a first dose of vaccine and mask-wearing is now mandatory.

Last week, Professor Collignon warned that drivers who come into contact with aircrew or quarantine systems were at greater risk of contracting COVID-19 than those who staff hotel quarantine, largely because of the nature of confined space with little ventilation in close proximity to high-risk people.

Aircrew who arrive at Sydney Airport quarantine at nearby police-managed hotels are driven there by private transport companies. NSW has quarantined 37,000 aircrew and pilots since the start of the pandemic. More than 3000 people a week are processed through NSW’s hotel quarantine scheme.

The NSW Deputy Police Commissioner, Gary Worboys, has confirmed the scope of the investigation into whether the driver adhered to conditions of employment had broadened to include the company that hired the driver and broader transport, work, health and safety offences.

“It’s not as simple as issuing a ticket to this gentleman, thinking that the whole system is repaired or one person is responsible for where we are at today. Police will continue that investigation, we seek any input that people have in relation to it, and I hope by early next week we may have some result out of that,” he said.

How did we get here?

It was mid-afternoon on Wednesday, June 16 when state health authorities notified the public of a case of COVID-19 in a limousine driver. The Bondi man in his 60s, and his wife, became the state’s first two local COVID-19 cases in 40 days. They tested positive for the Delta variant.

The variant is known to have a higher secondary attack rate than previous variants, meaning there is a higher risk contacts become cases. Within a week Sydney clocked up 65 cases connected to the Bondi cluster. Another five are under investigation.

Authorities hypothesise that the driver, who transports international aircrew to quarantine hotels, caught the virus from three crew members of a FedEx US aircrew sometime before June 11. Chant has said the viral sequence for the aircrew may be difficult to retrieve if it has been collected overseas.

The next day, a woman from the inner west in her 70s who visited Belle Cafe in Vaucluse at the same time as the driver tested positive. From there, it spread to Westfield Bondi Junction, a thoroughfare for thousands of people each day, when the driver had “fleeting” contact with a man in his 50s in the Myer store.

“It appears from CCTV cameras that it could have been a very fleeting contact between the infectious person and this gentleman,” said Berejiklian said of the Myer case last Friday. Masks became mandatory. People in the eastern suburbs were put on high alert.

The weekend was a turning point: five new cases emerged, all linked to Westfield, triggering authorities to ask tens of thousands of people to tested. One of those cases, a man in his 30s, went to Wollongong on Friday, June 18.

There were two new cases reported on Monday, both close contacts of known cases in the Bondi cluster and by Tuesday, a nine-year-old child at an eastern suburbs school became the first mystery case among 10 new local cases. The Bondi cluster grew to 21.

By Wednesday, 16 new cases included eight from a birthday party at West Hoxton in Sydney’s south-west. The party was attended by a woman in her 20s who worked at a Westfield Bondi Junction nail salon. In the following days, a person connected to Westfield visited the Tempe Salvos leading to further transmission.

More than 2500 people were in isolation by Friday and venue alerts were listed for Christo’s Pizzeria at Paddington, Joh Bailey’s Double Bay Salon and Double Bay’s Matteo restaurant. Public transport alerts went out, household guests were capped at five people, and large parts of the city were declared hotspots. That was just the beginning, though.

Berejiklian and her government have made much of restrictions and lockdowns being a thing of the past for NSW. Indeed, her brand has been built around a steadfast resistance to closing down the economy.

This time last year, the Premier said: “We cannot shut down every time we have a cluster of cases. We cannot keep shutting down, reopening, shutting down and reopening. That is not a good way for us to manage the pandemic because it creates chaos for people.”

However, just as most of this pandemic has repeatedly proven, the unexpected must be expected. The Berejiklian government has been dealt a set of circumstances that has forced it to change tack. The propensity of the Delta variant to spread at a rate not seen before has forced NSW to go down a path it has desperately avoiding. The next seven days will prove whether the government acted in time.