Washington: After four decades of seeking the nation’s highest office, Joe Biden entered the presidency as a deadly pandemic and an economic crisis prevented him from doing any of the parts of the job that might typically be considered among its perks.

He cannot review the troops, shake hands along a rope line or host a state dinner for a visiting foreign leader. But on Thursday, Biden finally participated in one sanctified ritual of the presidency: addressing a joint session of Congress. 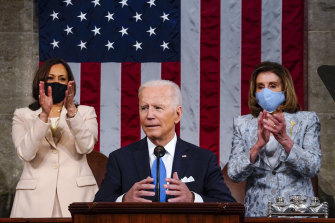 Vice-President Kamala Harris and House Speaker Nancy Pelosi stand and applaud as President Joe Biden addresses a joint session of Congress at the US Capitol in Washington. Credit:AP

The speech itself was hopeful in tone and ambitious in the scope of Biden’s proposals.

“America is on the move again,” the President said, acknowledging that he took office in the middle of the worst pandemic in a century, the worst economic crisis since the Great Depression and what he called the “worst attack on our democracy since the Civil War”.

History is made with two women on the dais.

Nothing about Biden’s speech looked like the annual address has in the past, with more brown chairs visible in the audience than masked faces. But the most arresting image of the night had nothing to do with coronavirus precautions. For the first time in history, two women sat on the dais behind the presidential podium.

Vice-President Kamala Harris and Speaker Nancy Pelosi in two seats of prominence were a reminder of the cracks in the political glass ceiling and the changing face of the Democratic Party.

“Madam Speaker. Madam Vice-President,” Biden said. “No president has ever said those words from this podium, and it’s about time.”

Later, while talking about equal pay and opportunity for women, he ad-libbed a second acknowledgment of the striking scene behind him. It “has been too long,” he said of equal pay. “And if you’re wondering — look behind me.”

Biden wants to be more than a ‘transitional’ president.

As a candidate, Biden pitched himself as a “transitional candidate” who was uniquely positioned to unite the country and beat Donald Trump, but who ultimately wanted to serve as a bridge to the next generation of Democratic leaders.

In his speech, Biden made it clear that he aimed to be more than a blip in the history books whose greatest achievement was the unseating of his predecessor and outlined proposals to expand family leave, childcare, healthcare, preschool and college education for millions of people. His ambitious plans, if passed, could make him a transformational figure in US history.

He called his $US2 trillion infrastructure plan a “once-in-a-generation investment in America itself,” noting that it was the largest jobs plan since World War II, and said that while he welcomed Republican ideas, “doing nothing is not an option”.

“The American Jobs Plan will be the biggest increase in non-defence research and development on record,” he said.

He took a victory lap on the coronavirus.

Biden’s advisers often say his presidency will rise or fall based on the number of vaccine shots in arms and relief cheques that show up in bank accounts. On Thursday, Biden indicated that he believed he was winning on the mark that was likely to matter most to Americans watching at home.

He bragged that he beat his goal of 100 million vaccine shots in his first 100 days. “We will have provided over 220 million COVID shots in 100 days,” Biden said, noting that nearly 70 per cent of seniors were now fully protected from the virus, up from just 1 per cent who were vaccinated when he was sworn in.

Even with his administration’s progress on vaccine distribution, a large percentage of Americans are hesitant to get the vaccine. If it takes too long to reach “herd immunity,” the point at which the spread of the virus slows, worrisome new variants could emerge that evade the vaccine and slow the progress made.

Biden did not mention those looming challenges. Instead, he focused on more optimistic statistics. “Today, 90 per cent of Americans now live within 5 miles of a vaccination site,” he said, noting that everyone older than 16 is now eligible for a vaccine.

“Senior deaths from COVID-19 are down 80 per cent since January,” he said. “Down 80 per cent. And more than half of all adults in America have gotten at least one shot.”

Bipartisanship has its limits.

Republican senator Ted Cruz appeared to sleep through some of Biden’s speech. But he was awake to clap when the President referred to his decision to end the war in Afghanistan. Republican senator Mitt Romney applauded when Biden said that “clean energy will create jobs for America.” As he left the House chamber, Biden schmoozed at length with Senator Rob Portman.

Those were some of the rare nods to bipartisanship during a night in which Republicans and Democrats continued to talk past each other, addressing different realities and different audiences. None of the Republicans in the hall clapped for Biden’s stated goal of helping cut child poverty in half this year. And there was little reaction to the President’s promise that “American tax dollars are going to be used to buy American products made in America that create American jobs,” even though it appeared to channel President Donald Trump’s economic vision of “buy American.”

Biden made plain that he would move ahead with $6 trillion of spending plans he has rolled out, even if he does not receive a single Republican vote of support in Congress.

In his rebuttal, Senator Tim Scott tried to paint Biden as a divisive leader.

“A president who promised to bring us together should not be pushing agendas that tear us apart,” he said, dismissing the infrastructure plan a “liberal wish list” that included “the biggest job-killing tax cuts of a generation”.

In response to Biden’s promise to “root out systematic racism,” Scott, the sole Black Republican in the Senate, claimed that “America is not a racist nation.”

Biden said he was open to hearing Republican ideas. But he indicated that he would not wait forever.

“I applaud a group of Republican senators who just put forward their proposal,” he said of an infrastructure proposal. “We welcome ideas. But the rest of the world isn’t waiting for us. Doing nothing is not an option.”