London: As a young boy, Manchester United striker Marcus Rashford never suffered from a lack of love. His single mother, Melanie, worked long hours as a cashier to support her five children, shower them with care and instil a sense of right and wrong in them.

There was, though, a lack of money. Visits to food banks and soup kitchens were not unfamiliar, nor a knock on the neighbour's door to ask for something to eat. The father of one of Rashford's best friends would sometimes put an extra biscuit in his son's lunchbox for Marcus.

"I remember the sound of my mum crying herself to sleep to this day, having worked a 14-hour shift, unsure how she was going to make ends meet," Rashford recalls. "That was my reality." 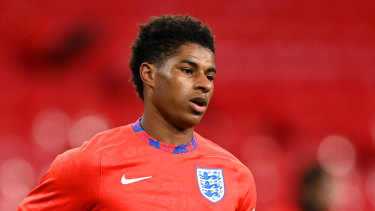 Marcus Rashford, a Manchester United striker and member of the English national team, has morphed from sportsman to statesman.Credit:Getty

A decade later, the 22-year-old earns a reported £10.4 million ($19 million) a year as one of the Premier League's brightest stars. He's also playing a cunning game off-field as an unlikely thorn-in-the-side of Prime Minister Boris Johnson.

Some 4.2 million children – about 30 per cent of all children – were already living in poverty in the United Kingdom before coronavirus smashed the economy, closed schools and splintered families.

The British government normally funds free school meals for poor students but not during the holidays. Rashford changed that earlier this year by shaming Downing Street into giving 1.3 million eligible children £15 weekly vouchers to use over the summer break in supermarkets. He also helped raise more than £20 million for charities.

The campaign was so successful that Rashford was made a Member of the Order of the British Empire earlier this month. 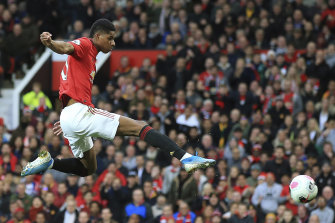 But in a decision which looks like a spectacular misreading of the national mood, Tory MPs last Wednesday voted down a Labour motion to keep the holiday voucher program running in England until Easter 2021 as Scotland, Wales and Northern Ireland have agreed to do.

Rashford – a model of calm, restraint and respect – could barely contain his disgust, warning children would go to bed that night hungry and feeling like they don't matter.

"Our views are being clouded by political affiliation," he said. "This is not politics, this is humanity. We talk about the devastating impact of COVID-19 but if projections are anything to go by, child food poverty has the potential to become the greatest pandemic this country has ever faced." 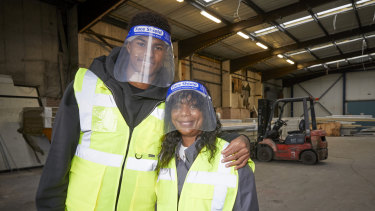 Johnson is not inclined to roll over but may offer a compromise as pressure builds. The Prime Minister points to £63 million distributed to local councils during the pandemic as proof of his administration's support for vulnerable children.

"I totally understand the issue. It is there, we have to deal with it. The debate is how you deal with it," Johnson said on Monday. "We don't want to see children going hungry this winter, this Christmas, certainly not as a result of any inattention by this government – and you are not going to see that."

Whatever the outcome, Rashford hasn't just gone into bat for vulnerable children; the sportsman turned statesman has also reminded Britain that this nation has a conscience.