Cave-idiots! ‘Foolish’ men spark three-hour rescue when they ignore lockdown to get lost in old mine shaft at night without proper clothes or gear

Four ‘foolish’ men were at the centre of a dramatic three-hour rescue operation after they became lost during a night-time underground adventure exploring an old mine.

Teams of firefighters, police and Ministry of Defence police were alerted at 1am on Thursday when the four lost men found a part of the mine with faint mobile signal.

However, it was not until 4am that the rescuers were able to lead them to safety following the escapade, which police described as ‘more than a little foolish.’

The drama happened in the former stone mine near the village of Box in Wiltshire after the young men had decided to explore the mine workings in the dark and without proper equipment. 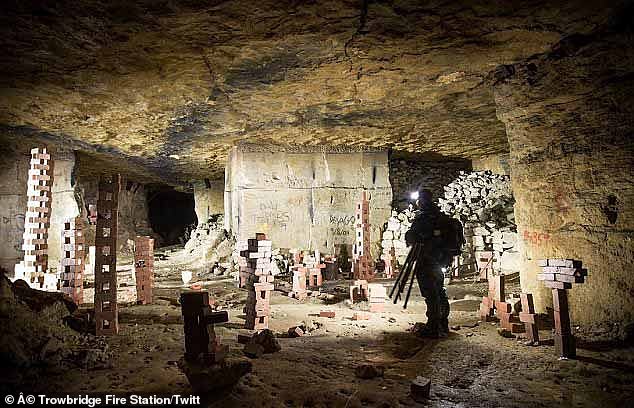 They realised they had to call for help after becoming hopelessly lost underground.

A spokesman for the Dorset and Wiltshire Fire and Rescue Service warned after the rescue of the dangers of exploring underground.

The spokesman said: ‘When the group managed to find phone signal and called for help, they had already been underground for a couple of hours.

‘It took over an hour for rescuers to locate their exact position, and it was 4am before they were brought to safety.’

The service’s station manager, Richard Humphrey, added that the men were ‘incredibly fortunate’ that they found enough mobile signal to raise the alarm.

He said the men should not have been exploring because of coronavirus lockdown restrictions and ‘didn’t have the correct clothing or equipment’.

‘We had a crew from Corsham fire station searching along all of the access points to the mine, trying to locate the group, with support from both Wiltshire Police and the MoD police,’ he said.

‘Once we had pinned down where they were, we were able to pass them water and blankets through one of the access points but it was still a long walk through the tunnels by the specialist search and rescue team to find them and then lead them out safely.’

Volunteers from local rescue service Mendip Cave Rescue were also involved in the recovery of the men.

A Wiltshire Police spokesman said: ‘This morning’s operation was the result of several agencies working together and we’d like to thank all of those involved who helped us bring this to a successful conclusion.

‘Fortunately the escapades for the four trapped males ended with their extraction, albeit some three hours after the initial call, but without injury to any of them – or their rescuers.

‘Exploring mines and caves is dangerous at the best of times but to do so at night and without specialist knowledge or equipment is more than a little foolish.

‘We’d urge anyone not to deliberately put themselves – or the emergency services and rescuers – in danger by staying home.’