A Florida police officer fighting for his life after being shot in the head by a gunman now on the run has a “heart of gold,” his police chief said Thursday.

The Daytona Beach officer, identified as 26-year-old Jason Raynor, remains hospitalized following the Wednesday night shooting. He has been with the department for two years and was an officer with the Port Orange Police Department from 2016 to 2019, Daytona Beach Police Chief Jakari Young told reporters during a news conference.

He is unmarried and doesn’t have any children, officials said. Young declined to reveal details about the case, instead choosing to praise Raynor’s character.

“He has a heart of gold. He’s not perfect but none of us are perfect,” he said. “But I can tell that if he pulls through this, this cop will do everything in his power to return to full duty and he will continue serving this community without an ounce of malice or hate in his heart for what happened to him.”

“This officer is 26-years-old. Twenty-six years old,” he added. “Fighting for his life. Most of us are just starting to live at 26-years-old.”

Raynor was shot just before 9 p.m. as he approached a suspicious vehicle while responding to a report of a “suspicious incident.” He asked the driver if he lived in the area when a brief struggle ensued and he was shot seconds later, according to police bodycam footage.

“The reality is that we as a community are facing what we can’t acknowledge is anything other than a nightmare,” Daytona Beach Mayor Derrick Henry said.

The suspected gunman, identified as Othal Wallace, 29, fled the scene and is being sought. A $100,000 reward is being offered for information leading to an arrest. In a search of the apartment complex where the shooting occurred, police found a rifle, numerous boxes of ammunition, a handgun, several high-capacity magazines and three ballistic vests, Young said. It wasn’t clear what Wallace’s connection to the apartment and the weapons might be. 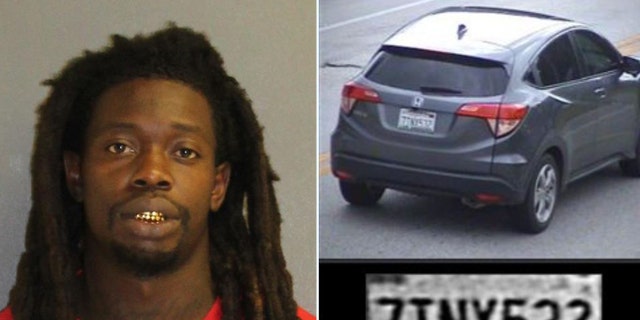 In an earlier news conference, Young said Raynor was “fighting” in the hospital and had undergone surgery.

“He’s got a long road ahead of him to recovery,” he said.

Earlier, Young said more than 500 officers from various agencies responded to help find Wallace, who may have fled to the Atlanta area, officials said.

Wallace has a long criminal history that includes aggravated assault with a deadly weapon without intent to kill, trespassing, resisting an officer and driving with a suspended license.

He is believed to be armed and dangerous, authorities said.