Moment fisherman, 51, is hoisted to safety after a shark attacked him and bit his arm while he sat on his boat in the Bahamas

A fisherman who was bitten by a shark was rescued in a dramatic helicopter airlift in the Bahamas.

Footage shows US Coast Guard officers pulling the man to safety with a makeshift tourniquet made by his crewmates to stop him from bleeding out.

The crew from Air Station Miami received a callout from the Shear Water fishing boat at around 12.50 p.m. Monday to report a shark attack at Bimini, a Bahamas island chain 80 miles off the coast of Florida.

It was reported that the 51-year-old victim was losing blood so they had placed a tourniquet around his arm.

The Coast Guard filmed the moment their Dolphin helicopter appeared above the vessel, the wounded fisherman seen clearly lying on the deck.

After an officer safely lowers themselves down onto the boat before bringing down a rescue basket.

The man is then seen being lifted up to safety and being flown to Miami. 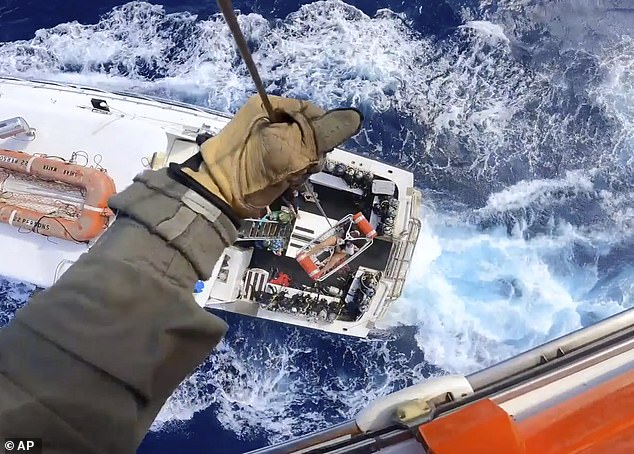 The man is now reported to be in a stable condition at a local Miami hospital.

‘This individual was fortunate a fellow crew member was able to render aid prior to the Coast Guard’s arrival which, allowed for a quick extraction from the vessel.’