Yarra Council could temporarily ban alcohol at the popular Edinburgh Gardens in Fitzroy North after residents complained of drug use, overflowing rubbish and faeces in the streets.

As many as 4000 people have packed into the inner-Melbourne park on sunny days in the aftermath of the second COVID-19 lockdown, which restrained groups of people from visiting homes and bars. 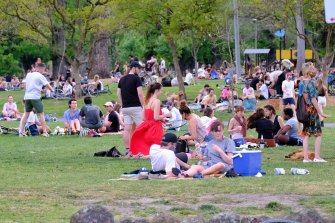 Edinburgh Gardens pictured on October 3, when groups of five were allowed to gather.Credit:Luis Enrique Ascui

A handful of residents have called for authorities to intervene, with council officers suggesting either temporarily banning alcohol or reminding the public about its impact.

Alcohol is already banned between 9pm and 9am at the park and at all times on New Year’s Eve, after more than 20,000 people took part in a rave to see in 2014.

A community campaign against the proposal to ban alcohol is already under way.

Resident David Trimboli spoke to councillors earlier this month asking for a regulated party to be held at the park on New Year's Eve to manage the COVID-19 risk while supporting local businesses, the arts and events industries.

Last week, households were leafleted by residents concerned about the behaviour of crowds, prompting a meeting with Yarra councillors from the Nicholls ward.

Greens councillor Amanda Stone said there was extra pressure on all parks following the COVID-19 restrictions and that a heavy police presence had been monitoring the park.

She said residents were concerned Edinburgh Gardens would return to its days as a party spot, despite the ban on alcohol after 9pm and on New Year’s Eve.

“Some people don’t like it being quieter, but something had to be done and that’s what was done. It’s changed the nature of New Year’s Eve there, it’s a safer environment,” she said.

Cr Stone said council had to find the right balance. She will speak to more people in the community before Tuesday’s meeting but acknowledged most people were doing the right thing.

“It’s a public park and people have a right to be there. What we’re weighing up is whether a minority of antisocial behaviour should drive an action which might punish the majority and that’s what we have to weigh up.”

Socialist councillor Bridgid O’Brien was hesitant to say whether she could support an alcohol ban but said it would go against the Black Lives Matter movement.

"We also have to keep in mind that this goes hand in hand with … concerns about the impact that over-policing of alcohol has on Aboriginal and Torres Strait Islander community members,” she said.

The council, which is majority Greens, will debate and vote on the issue next Tuesday.

The cost of maintaining toilet facilities has more than doubled for the summer period to $100,000, while cleaning is costing $8000 a week. There have been $6000 worth of signs added to the park.

“We're so lucky to have these beautiful green open spaces to enjoy and I love that people have made the most of it,” Cr de Vietri said.

She said the majority of people were behaving responsibly but neighbouring residents haven't been able to sleep and some had become anxious.

Council said it was mostly “party drugs” used at the park, though 12 discarded syringes have been found within Edinburgh Gardens in the past four weeks which is “not a particularly high number relative to other locations”.

The council report noted it was up to Victoria Police to respond to drug dealing or drug use.

Glen McCallum, president of residents group Protect Fitzroy North, is not an immediate neighbour to the park and has no firsthand experience of the issues.

He said there was a general consensus in his group that a complete ban was not necessary but that the 9pm alcohol curfew should be enforced.

Council has been hosting annual family-friendly events to mitigate the risk of antisocial behaviour and will roll out a pop-up cinema, music and other light entertainment at Edinburgh Gardens and Barkly Gardens in Richmond on December 31.