More than 90 per cent of federal budget money earmarked for “shovel ready” transport projects in Victoria is being withheld until after the second half of next year, prompting warnings the cash won't reach the state's troubled economy when it needs it most.

The federal government allocated more than $1 billion to Victorian transport infrastructure in this year’s budget, promising the money would support 3800 jobs and see the state “claw its way back” from the shock of the pandemic. 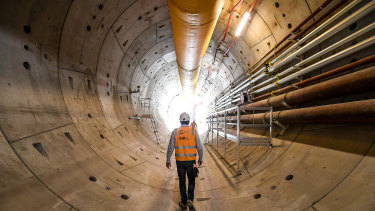 “This government recognises the pain many Victorians are going through and we know that jobs and economic stimulus through targeted infrastructure are what is needed right now,” federal Minister for Population, Cities and Urban Infrastructure Alan Tudge said in a statement earlier this week.

But the bulk of $1.2 billion in new and committed cash for 13 Victorian transport projects will not be spent until after next June, a federal government breakdown of spending shows.

As much as $1.1 billion of the money for building works — including upgrades on the Shepparton rail line, Warrnambool rail line, Barwon Heads Road and Hall Road, in Melbourne's south-east — would not hit the state’s coffers until after mid-2021.

Only 7 per cent or $81 million will flow to Victoria this financial year.

Economist at SGS Economics and Planning Terry Rawnsley said the cash injection needed to hit the Victorian economy in the next six months or so if the funding boost was to be truly stimulatory.

“You hear these big numbers rolled out, but it’s going to take so long for that money to hit the pockets of the people you want to keep employed and spend money in the broader economy to keep it ticking along,” Mr Rawnsley said.

Tradies looking for work over the next six to 12 months are feared to “end up unemployed”, with a downturn in migration prompting the Housing Industry Association to forecast that around 60,000 fewer dwellings will be built by 2030 compared with a peak in 2016.

Job cuts in the industry could leave long-term shortages in coming years when bigger infrastructure projects start to ramp up, Mr Rawnsley said.

But she questioned whether transport infrastructure should be relied on to recover from the pandemic, noting Victoria's mammoth infrastructure pipeline was under strain before the virus and was suffering from increased pressure due to ongoing restrictions.

Budget papers show Australian states and territories failed to spend $1.7 billion allocated to them in last year’s federal budget due to “slower than anticipated progress” resulting from the pandemic and last summer's bushfires.

"There’s a limit to how much we can speed this up under conditions where you’ve got to have COVID-safe workplaces,” Ms Terrill said.

The federal government’s $110 billion investment in transport infrastructure over the next decade included $242 million for local roads and community infrastructure in Victoria, which would be "spent with local councils on priority projects in local communities", he said.

"This is all about building shovel-ready projects sooner, creating local stimulus in local economies," he said.

A Victorian government spokeswoman said the federal funding would add to the state's multibillion-dollar pipeline.

"We know a strong Victorian economy helps the nation – the federal government’s infrastructure announcements are in addition to our $70 billion Big Build program and we look forward to working with the Commonwealth government to do everything we can to fast track our rebuild."

Spokesman for federal Minister for Population, Cities and Urban Infrastructure Alan Tudge said four commuter car parks funded in last year's federal budget are being built in Beaconsfield, Craigieburn and Hurstbridge, while construction on another 20 is set to finish in the next 18 months.

Master Builders Victoria's chief executive Rebecca Casson said while federal funding for major projects "won't all flow immediately", it would still "provide some assurance that a pipeline will exist in the medium term."