Preston Market could be redeveloped to make room for 2200 apartments under draft planning rules that the council says could wreck the 50-year-old “heartbeat of the local community”.

Up to 20 storeys of apartments could be built on the northern end of the 5.1-hectare site, according to plans drawn up by the Victorian Planning Authority and released for consultation on Tuesday. 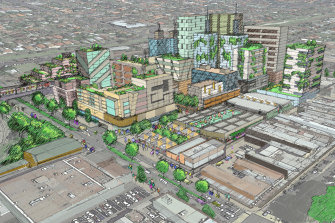 An artist impression of what could be allowed under the draft controls, viewed from the southeast with the market in the centre and apartment buildings in the background.Credit:VPA

The market would be repositioned to front Cramer Street, at the southern end of the site, and retain the existing fruit and vegetable shed to protect local heritage.

But most of the 120 stalls would be moved, allowing stallholders to keep trading during construction. The floor space for traders cannot be reduced under the proposal.

The planning authority has been reviewing the development rules for the precinct and fast-tracked the process after it was asked to identify projects that were close to shovel ready and had a high economic value to help boost the economy after COVID-19.

The authority wants to make better use of the private land to provide jobs and housing, arguing that well-connected land of that size was rare and was needed to tackle urban sprawl.

Preston Market borders Preston station, which is due to be elevated as part of a level crossing removal project.

Buildings could be up to 12 storeys high with setbacks on the southern end of the market precinct. They could be 16 storeys in the centre and 20 storeys at the northern end to make room for between 4500 and 6000 residents to move in.

Ten per cent of the apartments would need to be affordable housing and the developer would have to donate 10 per cent of the land value to create open space, most probably opposite Preston City Oval.

VPA chief executive Stuart Moseley stressed that the draft rules would make sure that any development retained a fresh food market of about the same size. 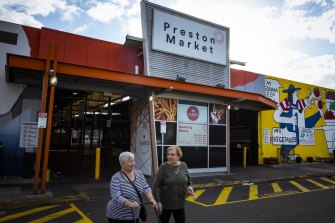 Darebin Council has previously rejected development applications for the site, but a proposal to construct four buildings between nine and 14 storeys high was approved on appeal to the Victorian Civil and Administrative Tribunal.

The current planning controls had no heritage protections and did not provide a clear future for the market, the VPA said.

The new plans would add local heritage protections to retain the market’s character, while giving certainty to its future and improving layout and access. 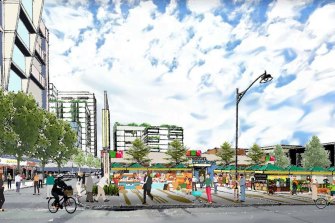 How the Victorian Planning Authority imagines the market could look at the Cramer Street entrance.Credit:VPA

Darebin mayor Lina Messina, whose first job in high school was at the market, said the precinct was “the heartbeat of the community”.

“Council is worried that under this plan, most of the market could be demolished,” Cr Messina said.

She said the council would make a submission after reviewing the details of the plan, to ensure the market remained where it was.

Councillors hardened their position on the market in March, voting to advocate for the market to be retained on the current footprint with mandatory height limits of 12 storeys. 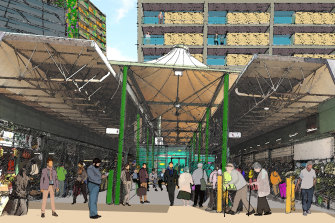 The existing fruit and vegetable shed would be retained.Credit:VPA

Construction would be unlikely to begin until at least 2024, subject to any permit applications which would also need to go through a consultation and approval process.

Sam Tarascio, managing director of part-owner Salta Properties, said the owners were committed to the success and longevity of the market.

“There is a growing demand for a more modern community market environment that continues to serve the needs of the existing traders and the community, and supports growth in Preston.”

The draft plans will be open for consultation for eight weeks on the Engage Victoria website.