A Liverpool dad has revealed how his ‘instinct’ led to a tip-off that helped catch the killers of James Bulger.

Alex Radnor-Boulton, 70, from Bootle near Liverpool, explained how a hunch of his gave detectives an unexpected lead in the case.

He says his ‘intuition’ led to the discovery of ‘breakthrough’ CCTV evidence that helped track the path of killers Jon Venables and Robert Thompson as they walked the two-year-old boy to his death on a railway line.

The 70-year-old, who would have been 43 at the time, worked for an electric company and spent a lot of his days in the area around the Bootle Strand shopping centre from where young James was abducted from his mother by Venables and Thompson.

In a bid to help the case, Alex used his in-depth knowledge of the surrounding streets to work out where the boys had gone and told people with security cameras to check their footage.

His quick-thinking led to one company spotting the boys in their car park which helped police track down James’ body and later identify to the two killers.

Venables and Thompson were convicted of killed James and were jailed until they 18 when they were given new identities and released on lifelong licence. 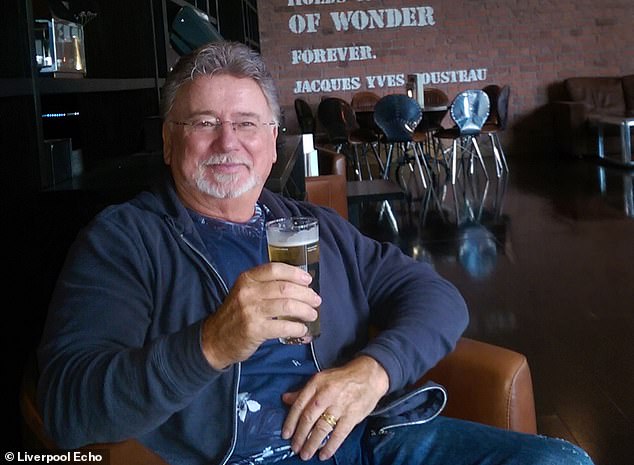 Alex Radnor-Boulton (pictured), 70, from Bootle, explained how he used intuition to trace path taken by Robert Thompson and Jon Venables as they abducted James Bulger from a Bottle shopping centre in 1993.

When he first heard the news about James being missing and as appeals were made across the city to help find the toddler, Alex said it ‘resonated’ with him as he had two young sons himself, who at the time were around five and eight years old.

‘When they came on the television and radio looking for help, I was out of my mind,’ said Alex.

He added: ‘It resonated with me – it could have been one of my lads, if you’re out shopping and young ones disappear for a second your heart sinks, so I felt for his mum.’

Because of his work with local businesses, including the Triad Building on Stanley Road, Alex knew the area ‘intimately’ and after work one day he found himself instinctively following the route the boys could have gone.

He said: ‘I was the contracting manager on the Triad Building, so the Strand was intimate to me and I knew if he was coming out that exit, if they’re going up there they’d want to get off Stanley Road straight away and turn up Park Street, and then the other road was just intuition.’ 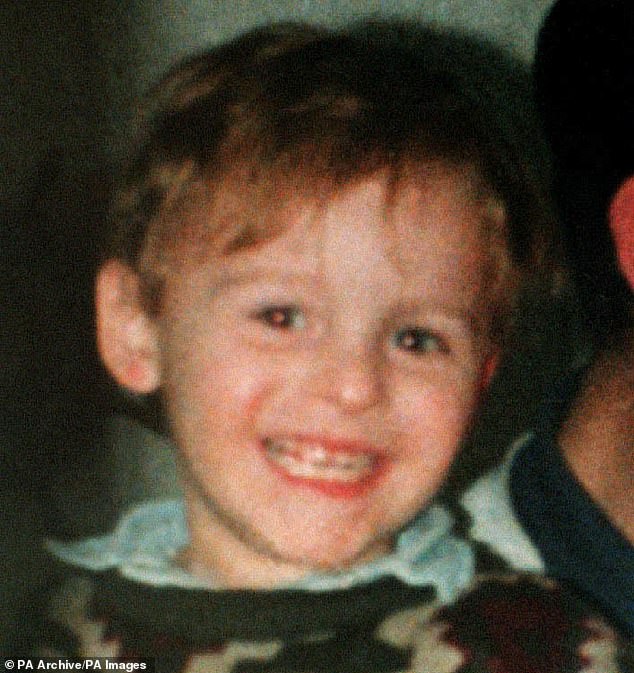 Two-year-old James Bulger was abducted from the Strand shopping centre in Bootle by Robert Thompson and Jon Venables, both 10, in February 1993 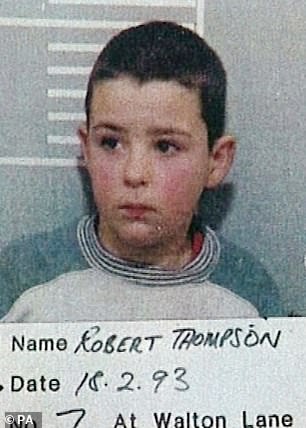 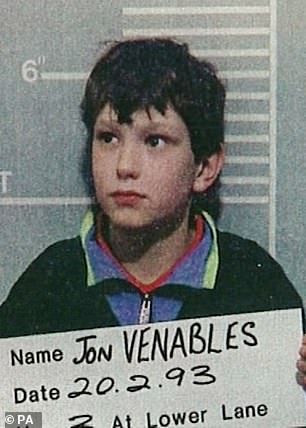 Thompson and Venables (pictured) were 11 when they faced a 17-day trial at Preston Crown Court in November 1993, and became the youngest murder defendants in the UK in over 100 years

He added: ‘I think everyone was on one, because there was a sighting of two young lads, but we all assumed they were teenagers from the Strand CCTV, we thought it was older lads.

‘But the cameras in the Strand were so grainy you couldn’t give the age.’

Alex said he knew the only way out of the Strand from the directon they were heading was Park Street, and from there onward the rest was ‘intuition.’

He said: ‘I don’t know what it was but I went further up, I worked for AMEX as subcontractors, and as I drove up to their offices, I looked up and there were two huge white cameras, and I thought god, I wonder.’

After spotting the cameras Alex, who knew the workers at AMEX, told them they ought to check the footage and see if there was anything police could use. 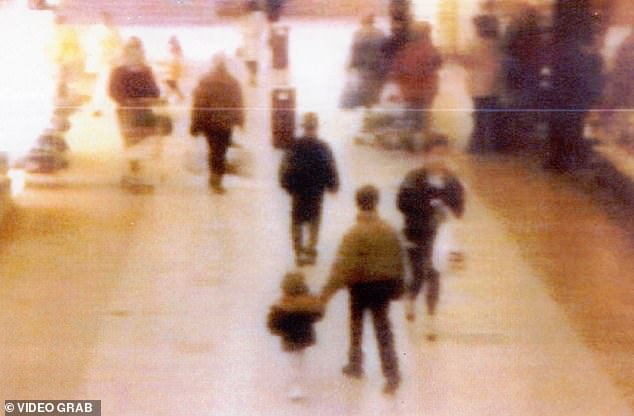 The original grainy CCTV footage from a Mothercare store which show Venables holding James Bulger’s hand as they walk out of the shopping centre. Robert Thompson is seen walking in front

CCTV from AMEX car park had in fact captured Thompson and Venables, both 10 at the time, with James.

Detectives have now revealed that the AMEX CCTV footage ‘changed everything’ and was a breakthrough that helped catch the killers.

Jim Fitzsimmons, a Merseyside police detective working on the case, said: ‘We got a call from the proprietor of a business called AMEX, he’d got CCTV from his car park, a very grainy image of three youngsters.

‘We could see the difference in Thompson and Venables, and we realised they were much smaller than they’d looked on the shopping centre images.

‘That really changed everything. We decided that we include suspects who were a lot younger.

‘So when a friend of the Venables family noticed paint on Jon’s coat, we’d already opened our minds to the possibility these boys could be as young as 10.’

Three days later, Alex said he received a phone call from the manager at AMEX who told him what they found.

He said: ‘He rang me and said “Alex I’ve got them, the two young lads with the kid on my camera, they’re walking up towards Breeze hill”. 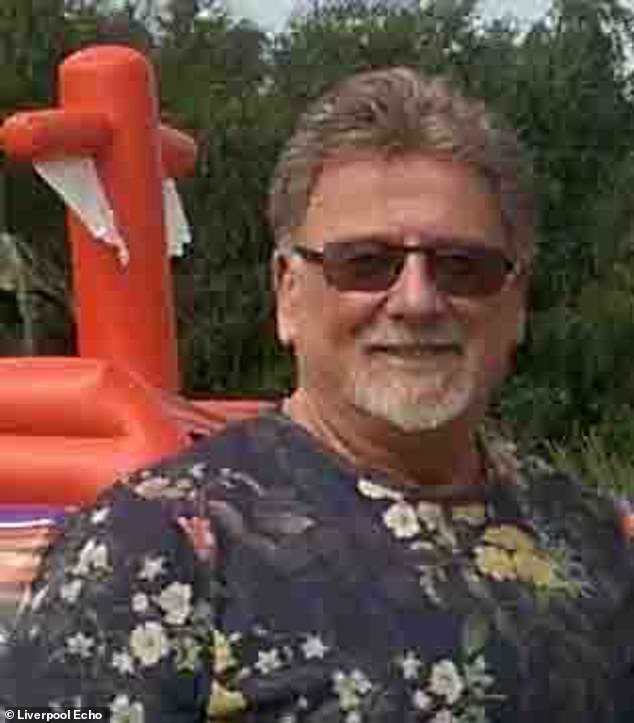 ‘About three days later he rang me back and he said “pat yourself on the back they’ve found him”.

‘He said “they’ve done something to the kid, police won’t tell me nothing but pat yourself on the back because without you coming into your premises we wouldn’t have thought of it”.’

Alex said he still isn’t sure what made him follow the specific route that led him past AMEX and to notice the camera.

He said: ‘I don’t know what made me drive up Park Street on that day, but after I did it went back to my office and when I got the news they were on the camera I said please let them find them.

‘(By) Some intuition I just thought I wonder if the kids might have walked up here.’

Questioned by police, Robert Thompson and Jon Venables denied being near the Strand shopping centre at the time of the crime.

However their fingerprints were discovered at the Bradford and Bingley building society, after the shop manager said he’d seen them playing at the window.

The images from AMEX also captured the boys, with James, walking towards Breeze Hill and the site where the two-year-old’s body was found.

Venables and Thompson were tried as adults for the abduction and murder of James because they were over 10 – which is legally deemed to be the age of criminal responsibility.

They were both found guilty on November, 24 1993, making them the youngest people convicted of murder in English history.

Both were given new identities and have been given anonymity.

What has happened to Jon Venables and Robert Thompson since James Bulger’s murder? 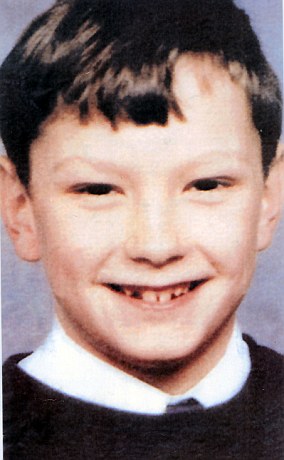 Jon Venables, pictured as a boy, has been given lifelong anonymity by the courts

Jon Venables and Robert Thompson were found guilty of killing Bulger in November 1993 and were sentenced to custody until they reached 18.

They were freed in 2001, aged 18, and given a new identity to protect him from the risk of vigilante attacks.

They were made the subjects of so-called ‘Mary Bell orders’, lifetime anonymity court injunctions named after Mary Bell, who was found guilty of killing two boys at a hearing in Newcastle in 1968.

Only six people have been made subject of the orders; Venables, Thompson, Bell, Maxine Carr, who was convicted of perverting the course of justice in the Soham murders, and two brothers who, aged ten and 11, tortured two younger boys in Edlington, South Yorkshire in 2009.

At the time of Venables’ first release from prison, a psychiatrist ruled that he did not pose a danger to the public and was extremely unlikely to commit any further offences.

Years later it emerged Venables had been detained in Vardy House – a small eight-bed section of Red Bank secure unit in St Helens on Merseyside – where it’s said he made such good progress he was kept there for eight years, despite it actually being a short-stay remand unit.

Shortly before his release in 2001, when aged 17, Venables was reported to have allegedly had sex with a woman who worked at the Red Bank secure unit where he was being held. The allegations were investigated and a female staff member accused of sexual misconduct was suspended, never to return.

Venables’ release under his new identity went ahead and he is known to have been living independently by March 2002 – some time thereafter beginning a relationship with a woman who had a five-year-old child, although he denies having ever met them.

He was then reported to have had a number of ‘younger girlfriends’ which suggested he was enjoying a delayed adolescence.

As his supervision was apparently reduced, he developed drinking and drugs problems, and he compromised his identity at least twice by telling friends he was a convicted murderer.

In September 2008, he was arrested on suspicion of affray after a drunken brawl and was given a formal warning by the probation service for breaching the good behaviour terms of his licence. 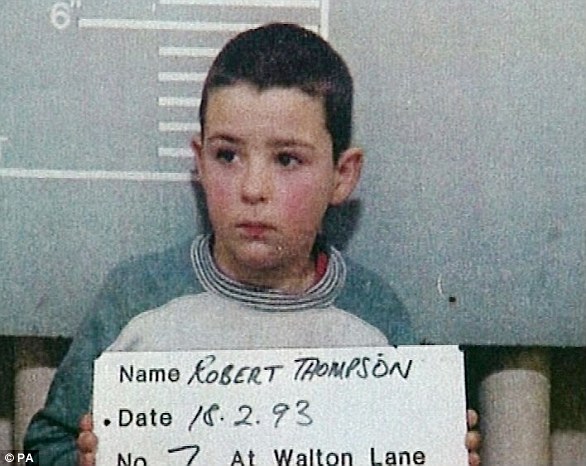 Later the same year, Venables was cautioned for possession of cocaine after he was found with a small amount of the class A drug.

When a probation officer later visited his home in Cheshire to discuss his fears that he could be in danger, he was attempting to destroy the hard drive of his computer.

The hard drive was later examined by police, who discovered that it contained dozens of indecent images of children.

Venables admitted he had posed online as a 35-year-old woman who had abused her eight-year-old daughter, and was returned to prison.

During his latest imprisonment he was given yet another new identity because of the risk posed by a previous security breach. Venables was paroled again in 2013 and took on his fourth new identity.

He was sentenced to 40 months in prison after pleading guilty to having more than 1,000 indecent images of children, in February 2018.