Farm fire kills up to 2,000 pigs as firefighters battle to control massive blaze in front of ‘devastated’ farmer

Up to 2,000 pigs were killed in a fire on a farm in Northern Ireland as firefighters had to battle to stop the fire from spreading across the site.

Firefighters were called to the blaze in Kilkeel, County Down, shortly before 9pm on Monday.

The firefighters battled to stop the flames from spreading from a shed housing the pigs to other adjacent farm buildings at the Carrigenagh Road farm. 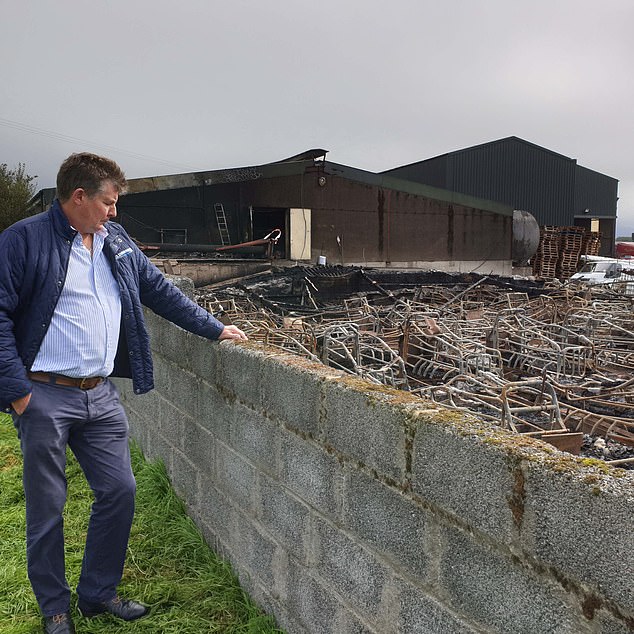 Farm owner Trevor Shields (above) has been left ‘devastated’ after 2,000 pigs were killed at a fire on his farm in Kilkeel, County Down, shortly before 9pm on Monday

One fire worker suffered minor burns to his feet during the incident and was taken to hospital for treatment.

Farm owner Trevor Shields has been left ‘devastated’ by the losses from the fire, which is believed to have been accidental.

Northern Ireland Fire and Rescue Service Assistant Group Commander Martin Healy said the fire was already well-developed when he arrived with his colleagues to the scene.

He added: ‘The firefighters worked in obviously very difficult conditions – in darkness and underfoot – to extinguish the fire. 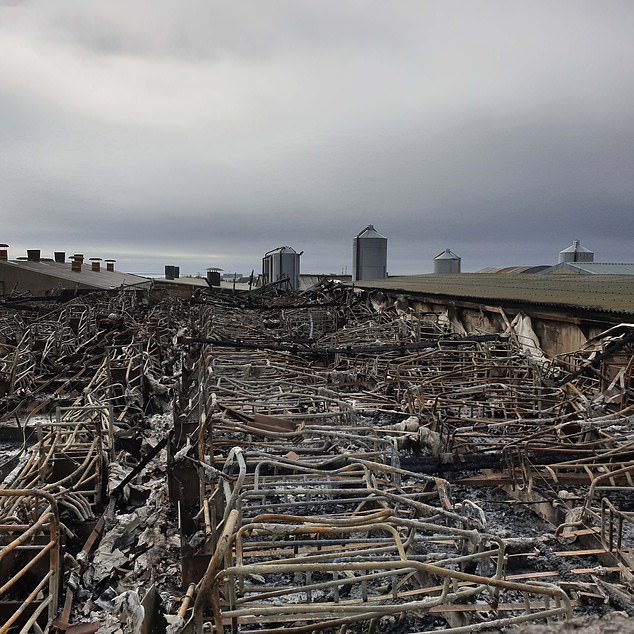 Firefighters spent nearly three hours trying to stop the blaze spreading to adjacent sheds. One fire worker suffered minor burns to his feet during the incident

‘Actually we had to try to protect the other sheds as there’s a lot of other pigs housed in them and thankfully we were able to stop the fire spreading to those sheds.

‘But unfortunately we were unable to save between 1,500 and 2,000 pigs within the shed the main blaze was contained in.’

He told BBC Radio Ulster the incident was a ‘very difficult scene to witness’.

He said: ‘We spoke with the farm owner and obviously our sympathies go out to him and all his staff on the devastating loss and he said himself he was devastated for the loss that he did suffer.’