Many Victorian private schools are freezing fees next year to help families recover from the financial impact of the coronavirus crisis.

Carey Baptist Grammar School principal Jonathan Walter said the coeducational school, which charges just over $33,000 annually for years 11 and 12, knew it was important not to increase fees in 2021. 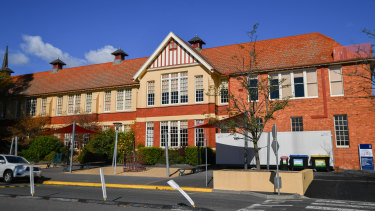 Scotch College announced it would freeze fees for 2021 earlier this year. Credit:Joe Armao

"We're very conscious of the extent of the hardship that's out there and wanting to do something in support of our families in what was a challenging year," he said.

"They're incredibly grateful having that surety around their expenses for next year, knowing that there's not an increase in the costs there."

He said it had taken careful budgeting to achieve the fee freeze.

Hawthorn's Scotch College – the second most expensive place in the state to educate a year 12 student, with fees of almost $40,000 – announced in May that it would not increase fees for next year.

"We were very, very conscious of the financial burden on families during 2020," he said.

"We've had some really lovely, heartfelt emails where parents have written, 'We thought we'd have to pull our son out, but now we don't have to.' "

Haileybury, which charges $33,560 a year for students in years nine to 12, is also forgoing an annual fee increase. 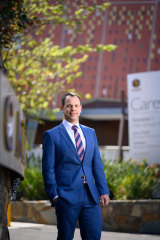 "Haileybury is supporting its community with a zero increase in fees for 2021," a spokesperson said. "The school is helping many families with extended payment plans as the economy begins to recover.

"Enrolments are very strong across all four Haileybury Melbourne campuses."

Xavier College in Kew will increase its fees but by a reduced rate of 1.5 per cent. The school gave every family a 10 per cent rebate during the year as well as anextra rebate for those most affected.

Edmund Rice Education Australia said 11 of its 54 Catholic schools nationally would have no fee increase. This includes St Kevin's College in Toorak. The remaining schools opted for reduced increases.

"While all independent schools have been affected by COVID-19 and its economic impact, the nature and extent of the impact varies widely," she said.

"This reflects the wide diversity of independent schools – their size, location, the communities they serve, the programs they offer, and their level of resources.

"Critical issues are staff salaries and costs, which are the biggest operating expense facing schools."

The chief executive of the Association of Heads of Independent Schools of Australia, Beth Blackwood, said schools across the country were being prudent.

"Schools are being very cautious, even with strong enrolments," she said.

"There are programs such as JobKeeper still keeping people financially afloat that may not be there next year.

"Schools have the interests of students at heart and in such turbulent times having to change schools is not what they would want for their students."