Making Britons wear face masks while out Christmas shopping on crowded streets could slow the spread of Covid, scientists claim

Wearing a face mask while shopping for Christmas presents may slow the spread of coronavirus, scientists say.

Current rules only require the coverings to be worn inside shops, with many quickly ripping them off as soon as they step back outside.

But leading experts have now urged Brits to keep their masks on in crowded outdoor spaces, such as packed high streets.

And London’s mayor Sadiq Khan called for face coverings to be made mandatory in busy outdoor settings after images showed the capital’s streets were packed full of Christmas shoppers.

His comments came before it was revealed that London would be plunged into Tier Three because of a spike in Covid-19 cases. The toughest curbs will come into force from midnight, with pubs and restaurants forced to switch to takeaway only.

The city of nine million became the country’s coronavirus hotspot last week, after recording an infection rate of 242 cases per 100,000 people in the seven-day spell ending December 10. 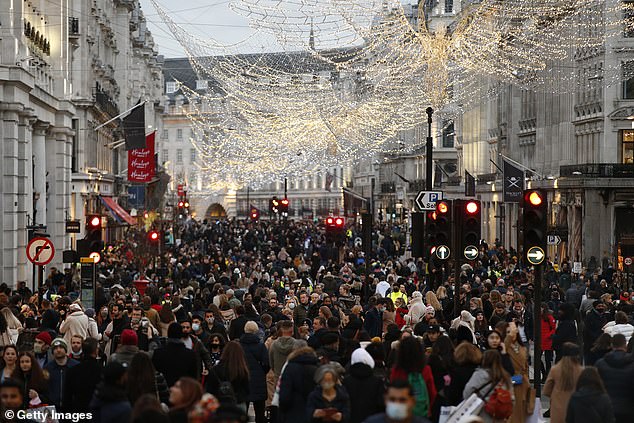 Scientists have suggested that Britons should wear face masks on busy shopping streets. Pictured above are shoppers on Regents Street, London, on December 12

The coronavirus pandemic could be curbed if at least 70 percent of the public wore masks, a new study suggests.

Researchers looked at the physics of difference face coverings, including their material and designs.

They found that the three most common types of face masks – N95s, surgical masks and face masks – help lower reproduction rates, meaning less people are being infected due to social distancing.

However, the team also found that only N95s were the most effective at filtering tiny infectious particles that can hang in the air for extended periods and burrow deep into the lungs.

For the study, published in the journal Physics of Fluids, the team looked at research on face masks and how they filter or block the virus.

They analyzed how masks protect against fluid droplets that are expelled when a person coughs, sneezes, sings or even breathes.

Professor Trish Greenhalgh, a primary care expert at the University of Oxford, told The Times that face masks should be worn when people are packed close together.

‘In addition to “shared air” (mostly an indoor risk), there’s also the problem of being caught in the direct jet of an exhaled gas cloud when someone coughs, speaks, sneezes or just breathes out,’ she said.

‘If you’re close enough to feel their warm breath on you or smell their halitosis (bad breath) you probably need a mask even outdoors.’

Professor Melinda Mills, a sociologist also at Oxford University, added that Briton was an outlier in insisting masks should only be worn inside – and not outside in public.

‘When we looked at the data in June, there were 71 countries who required everyone in public to be masked,’ she said.

‘It was a minority of countries that chose specific complicated policies. (The virus) is aerosol, it’s transmitted in air, this is good to do.’

Mr Khan has backed the calls, saying yesterday: ‘Face coverings should also be made mandatory in busy outdoor public spaces, given the numbers on our high streets in the run-up to Christmas.’

He told BBC Breakfast this morning that the London Assembly has been lobbying the Government to make the change to its rules.

The World Health Organization suggested people living in high transmission areas should wear face masks outdoors when they can’t keep a metre apart at the start of this month.

But they admitted there was ‘limited evidence’ that the masks halt transmission of the virus. 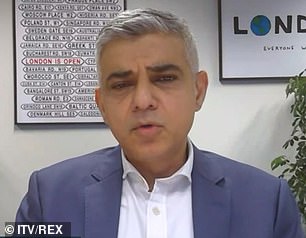 In their report, they also suggested the coverings should be worn in private homes if someone comes inside who does not live there.

The Netherlands and Ireland have both already ordered shoppers to wear face masks while on busy shopping streets.

Taoiseach Micheal Martin – Ireland’s equivalent to the Prime Minister – said on Friday last week that citizens would be able to work out when a mask should be worn.

‘We’re asking people to wear the masks as an extra precaution (in busy shopping areas) and also in crowded working places as well.’

London’s mayor this morning called on the Government to offer more support to the capital when it is placed in Tier Three, amid fears thousands of jobs could be lost.

‘The negative impact additional restrictions will have on jobs and businesses struggling to stay afloat is of huge concern,’ he said.

‘We urgently need more Government support for the sectors of our economy being hardest hit, including hospitality and culture.’

The mayor added yesterday that the surge in cases among secondary school children – those aged 10 to 19-year-olds – meant that ministers should also consider shuttering schools.

Education Secretary Gavin Williamson this morning ordered London boroughs that had asked schools to close, however, to keep them open.

As much as 60 per cent of England will be in Tier Three from tonight, when another 11million people in London and the South East are hit with tougher restrictions.

Coronavirus cases ticked up by 37 per cent yesterday compared to the same day last week, after 20,263 new infections were recorded on Monday.

It takes up to five days for someone who is infected to develop tell-tale symptoms of Covid — a dry cough, a fever and a loss of smell or taste.