Health and data experts are urging the government to release more detailed COVID-19 vaccination information amid claims the data being published is sometimes weeks late, lacking vital details and is presented mostly as “spin” rather than as candid, useful information.

As Sydney’s lockdown defies the government’s best attempts at suppressing the virus, experts and community groups are calling for access to the Australian Immunisation Register to help them develop policies and suggestions for battling the pandemic.

In America, the Centres for Disease Control and Prevention has since March made local area vaccine data available in easy-to-use formats. Australia does not release this information in any format; instead, it publishes a PDF slide deck of state by state vaccination rates.

Head of Respiratory Discipline at the University of Sydney, Professor Christine Jenkins, said the vaccination rollout has been politicised and slowed by a lack of data transparency, which makes it hard to find the barriers to vaccination in communities.

“We need to know what proportion of people are taking up the vaccine, where vaccine hesitancy is and which cultural subgroups is it in most specifically,” Professor Jenkins said.

“Unfortunately, I think the data presentation is infused by a desire to put a positive spin on what [the government is] doing.”

Data innovation engineer Ken Tsang built the COVID-19 Near Me website and helps break down federal government data for covidlive.com.au.

He said the way information is released is an “unnecessary hindrance” and “terrible for public confidence in the rollout”.

“Australia is one of the worst countries in the Western world for vaccine data transparency,” Mr Tsang said, arguing it was not presented in a way that can help experts track the rollout in any meaningful way.

Not only is the data “really spotty” but is also published randomly. For example, the early June weekly update about the supply and production of vaccines was published on Thursday – more than two months late, he said. 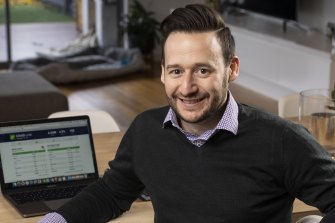 Melbourne data specialist Anthony Macali was so frustrated by the lack of vaccination data he worked with a group of data analysts to engineer a solution and publish it online in the absence of official numbers. Credit: Photo by Eamon Gallagher

On Thursday, an extra seven slides were added to the vaccine presentation data and the counting of doses switched from tallying where the vaccine was administered to the residency of the person who got the vaccine, data analyst Anthony Macali said.

“It’s been so difficult to work with [the PDF slides],” Mr Macali, who founded covidlive.com.au said. “We had to beg for months to get the second vaccine dose data.”

Mr Macali was forced to synthesise vaccine information from press conferences, state health bodies and other sources early in the rollout as he is committed to feeding a University of Oxford project that is tracking the virus internationally, called Our World in Data.

Australia was one of only a few countries in the world that didn’t have second dose vaccine data until recently, he said.

The health department only releases a national figure for vaccination rates of Indigenous people and has refused to break it down into state or territory numbers.

The Aboriginal Health & Medical Research Council NSW (AH&MRC) is calling for more information about vaccination rates so its members know where to target vaccination drives or counter vaccine hesitancy.

“We need to see what services are in the area, where we can help fill the gaps. It would be good to see the impact of the number of people who had that first shot in NSW, where they’re actually situated,” AH&MRC chief executive and Gubbi Gubbi and Waanyi man Robert Skeen said. “There is a lot of anti-vax movement starting to take hold in our communities and creating that scaremongering.”

Some 136,437 Indigenous people have received at least one dose of the vaccine to July 31, which is about 23 per cent of those eligible. About 10 per cent are fully vaccinated.

A spokesman for Lieutenant-General John Frewen, who is running the country’s vaccination rollout, said his Operation COVID Shield is considering whether to release more detailed data sets.