Sao Paulo: Brazil has recorded half a million COVID-19 deaths, a toll second only to the US that shows few signs of easing. Yet residents are spurning vaccines that they believe are substandard in favour of hard-to-find shots from Pfizer.

In Sao Paulo, people demand the US company’s shots at public clinics and often walk out if none are available. Some health-care centres have put up signs saying “no Pfizer shots” to save time. Many vaccination centres are empty, and the few that have Pfizer have massive lines. 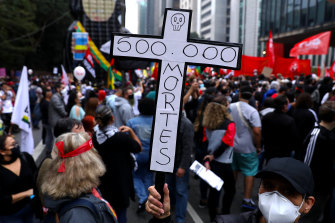 A demonstrator holds a sign in the shape of a cross with the phrase ’500,000 deaths’ during a protest against Bolsonaro’s administration on June 19, 2021 in Sao Paulo, Brazil. Credit:Getty Images

Maressa Tavares, a 29-year-old teacher, could have gotten her shot two weeks ago in Rio de Janeiro. But at the request of her father, she’s holding out for Pfizer. “For me, it didn’t make a lot of difference which one to take, but my father has very strong beliefs,” she said.

Such reluctance is hobbling a vaccination campaign already plagued by shortages and delays. Failure to control the disease would harm not only Brazilians, who are dying at the rate of about 2000 a day, but also threaten a global resurgence of the pandemic if the nation of 213 million becomes a breeding ground for new strains.

Brazil’s reported death toll is second only to that of the US, where the number of lives lost has topped 600,000. Brazil’s population of 213 million is two-thirds that of the US. 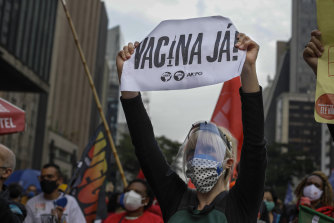 A demonstrator holds a sign that reads in Portuguese; “Vaccine now”, during a protest against Brazilian President Jair Bolsonaro.Credit:AP

China’s Sinovac and England’s AstraZeneca Plc account for about 96 per cent of shots available in the country, compared with just 4 per cent for Pfizer, according to government data.

While doctors say residents should get any shot available, Sinovac’s CoronaVac has a far lower efficacy rate than other vaccines, and President Jair Bolsonaro bashed its “origin” and initially refused to buy it. Astra saw its usage suffer worldwide thanks to rare blood clots, side effects and a still-pending approval in the US.

“At first, people were afraid to get CoronaVac, because it’s Chinese, and now it’s Astra because of the reactions,” said Luiz Carlos de Souza e Silva, a nurse who helps immunise people at a public clinic in Rio. “People are really misinformed, the government took too long to come up with a vaccination plan, that creates a lot of fear.”

Hesitancy isn’t uniquely Brazilian. Amesh Adalja, who studies pandemics at the Johns Hopkins Centre for Health Security in Baltimore, said it has existed ever since the smallpox vaccine was created in 1796. More than two centuries later, US officials have promised everything from french fries to lottery prizes to persuade people. In Europe, Astra usage stalled after the blood-clot reports, and Uruguay even threw away doses.

But nowhere are vaccines needed more than Brazil. The country has given out more than 86 million shots, but that covers less than 30 per cent of the population with a first dose and just 12 per cent with two, according to data compiled by Bloomberg. Adalja said misinformation on social media, combined with “denial from the highest levels of the government,” have hindered Brazil’s campaign.

“The virus is circulating like crazy, a lot of people are infected, few are vaccinated, and mostly just with first doses,” said Atila Iamarino, a biologist educated at the University of Sao Paulo and Yale who specializes in virology. “Opting to wait for this or that vaccine is extremely dangerous.”

The government began an organisation campaign to push vaccination and masks only in May, more than a year after the virus arrived. Bolsonaro has minimised the crisis throughout. In the past week alone, he was the star of a motorcycle rally in his honor in Sao Paulo, criticised lockdowns and ordered the health ministry to study making masks optional.

Anti-government protesters took to the streets in more than a score of cities across Brazil on Saturday as the nation’s confirmed death toll from COVID-19 soared past half a million — a tragedy many critics blame on Bolsonaro.

Thousands gathered in downtown Rio de Janeiro waving flags with slogans such as “Get out Bolsonaro. Government of hunger and unemployment.”

“Brazil is experiencing a great setback. The country was an exemplary country for vaccination in the world. We have widely recognized institutions, but today we are in a sad situation “, said Isabela Gouljor, a 20-year-old student who joined the protest in Rio.

Brazil’s Senate is publicly investigating how the toll got so high, focusing on why Bolsonaro’s far-right government ignored opportunities to buy vaccines for months while it relentlessly pushed hydroxychloroquine, the malaria drug that rigorous studies have shown to be ineffective in treating COVID-19.

The scepticism has extended to the death toll itself, with Bolsonaro arguing the official tally from his own Health Ministry is greatly exaggerated and some epidemiologists saying the real figure is significantly higher — perhaps hundreds of thousands higher.

Dr Abdel Latif, who oversees an intensive care unit an hour from Sao Paulo, said the fear and desperation caused by the coronavirus have been compounded by misinformation and opinions from self-styled specialists and a lack of proper guidance from the government.

“We need real humane public health policy, far from the political fight and based on science and evidence,” he said.